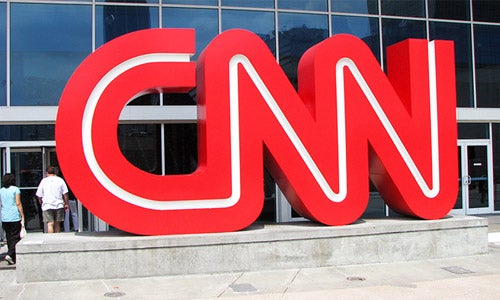 CNN aired almost five times as much oil industry advertising as climate change-related coverage in the one-week periods following the announcements that 2015 was the hottest year on record and February 2016 was the most abnormally hot month on record. 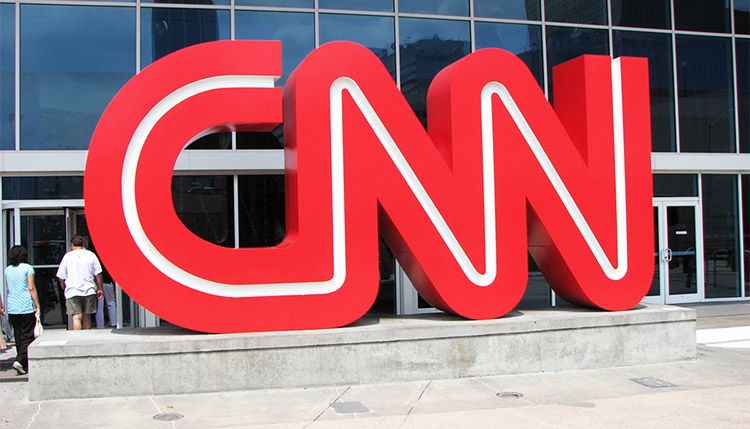 Specifically, CNN aired 23.5 minutes of American Petroleum Institute ads during its morning, afternoon and primetime coverage over those two weeks, compared to just five minutes of coverage about climate change or the temperature records. That disparity does not even account for dozens of Koch Industries ads that also ran on CNN, which were not energy-focused but did serve to boost the image of the oil billionaire Koch brothers’ primary corporation.

In January, NASA and NOAA Independently Confirmed 2015 Was Hottest Year on Record.

On Jan. 20, the National Aeronautics and Space Administration (NASA) and the National Oceanic and Atmospheric Administration (NOAA) announced that they had each independently determined that 2015 was the hottest year on record. In an online article, CNN.com reported: “While it wasn’t necessarily a surprise that 2015 finished in first place, its margin of victory was startling—it lapped the field, with the average temperature across the entire planet 1.62 F (0.90 C) above the 20th century average, more than 20 percent higher than the previous highest departure from average.” A NASA press release on the announcement noted that the increase in the earth’s temperature since the late 19th century has been “largely driven by increased carbon dioxide and other human-made emissions into the atmosphere.” [CNN.com, 1/20/16; NASA, 1/20/16]

In March, NASA and NOAA Determined That February 2016 Was the Most Unusually Hot Month on Record.

On March 17, NOAA released data showing that “[t]he combined average temperature over global land and ocean surfaces for February 2016″ was not only “the highest for February in the 137-year period of record,” but also “surpassed the all-time monthly record” set in December 2015. As Time magazine reported, “NOAA’s findings confirm those released earlier this month by NASA and the Japan Meteorological Agency that both show February as the most unusually hot month on record.” [NOAA, Global Analysis—February 2016, accessed 4/25/16; Time, 3/17/16]

This analysis examined CNN’s morning, daytime and primetime (4 a.m. to midnight ET) coverage for the one-week periods following the announcements that 2015 was the hottest year on record (Jan. 20-26) and that February 2016 was the most unusually hot month on record (March 17-23). During those timeframes, CNN aired 23.5 minutes of ads by Vote4Energy, a project of the American Petroleum Institute (API), compared to approximately five minutes of coverage about climate change or the temperature records, a ratio of nearly 5-to-1. The Hill reported in 2015 that the Vote4Energy ad campaign, which features individuals claiming that producing more oil and natural gas will benefit Americans and the economy, is part of API’s “attempt to convince voters to choose candidates who support the priorities of the oil and natural gas industry in 2016.” [Vote4Energy, accessed 4/25/16; YouTube, 3/1/16, 3/1/16, 1/8/16, 1/8/16, 1/8/16; The Hill, 6/23/15] 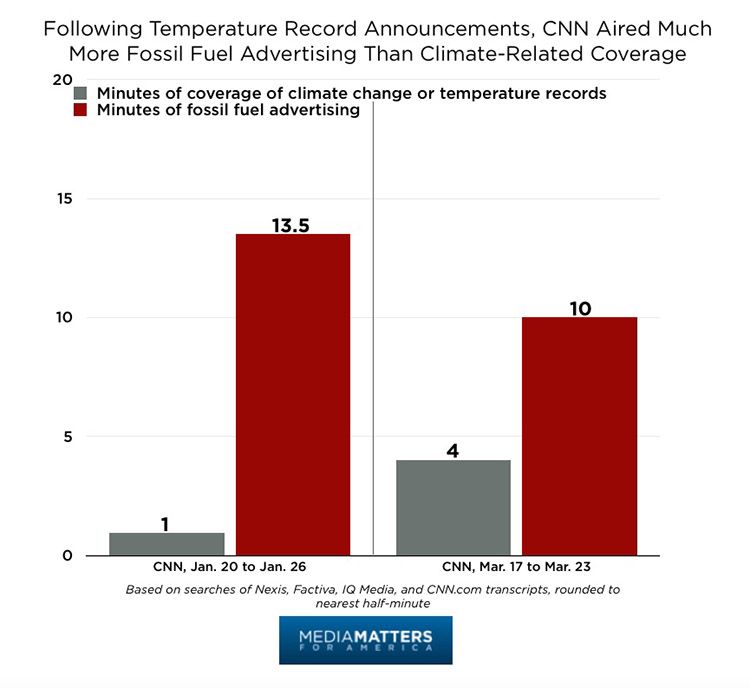 In Week After Hottest Year Announcement, CNN Aired Less Than One Minute of Climate-Related Coverage and 13.5 Minutes of Oil Industry Ads.

From Jan. 20 to Jan. 26, CNN morning, daytime and primetime programming included only 57 seconds of coverage about climate change or the announcement that 2015 was the hottest year on record. Over that same time period, CNN aired 13.5 minutes of American Petroleum Institute ads. The climate-related segments included one on the January 21 edition of Early Start, in which anchor Christine Romans reported that 2015 was the hottest year on record and that officials say “the planet is still warming with no apparent change in the long term global warming rate.” Additionally, CNN senior legal analyst Jeffrey Toobin briefly mentioned Republican climate science denial during a discussion of Hillary Clinton‘s emails on Anderson Cooper 360 and CNN host Fareed Zakaria noted that the “[t]he World Economic Forum said this year that the greatest global risk is the failure of climate change mitigation and adaptation,” during a Fareed Zakaria GPS segment about a study finding that humans have entered a new geological epoch known as the Anthropocene. [CNN, Early Start, 1/21/16; Anderson Cooper 360, 1/20/16; Fareed Zakaria GPS, 1/24/16]

Following Announcement That February 2016 Was Most Unusually Hot Month Ever, CNN Aired Four Minutes of Climate-Related Coverage and 10 Minutes Of Fossil Fuel Ads.

In the one-week period beginning March 17, when NOAA released data showing that February 2016 was the most unusually hot month ever recorded, CNN aired only four minutes of coverage about climate change or the temperature record during its morning, daytime and primetime coverage. During that same time period, CNN aired ten minutes of American Petroleum Institute ads. On March 18, CNN anchors Christine Romans and John Berman delivered nearly-identical reports on February’s “astounding” temperature record during the 4 a.m. and 5 a.m. editions of Early Start, respectively, but neither explicitly mentioned climate change or the role fossil fuel pollution and other human activities play in driving climate change. The March 20 edition of Fareed Zakaria GPS featured an interview with astronaut Piers Sellers about his climate change advocacy, followed by a brief report about International Energy Administration (IEA) data showing a decline in carbon emissions from energy production, which Zakaria described as “some good news on the climate front” and a “welcome update in the climate battle.” Finally, on the March 20 edition of New Day Sunday, anchor Christi Paul reported that major cities around the world were participating in Earth Hour, an event meant to bring awareness to climate change, by switching off their lights. [CNN, Early Start, 3/18/16, 3/18/16; Fareed Zakaria GPS, 3/20/16, 3/20/16; New Day Sunday,3/20/16]

CNN aired two additional reports on climate change and the temperature records that were not included in this study because they occurred between midnight and 4 a.m. ET. Any fossil fuel ads that aired during these hours were also excluded. [CNN, CNN Newsroom, 1/21/16, 1/21/16]

During the two one-week periods examined in this study, MSNBC aired six minutes of American Petroleum Institute ads (all during Morning Joe broadcasts), which was far less than the 23.5 minutes of API ads that aired on CNN. This study did not fully examine MSNBC’s climate change coverage, but one of MSNBC’s climate-related segments alone—during the Jan. 21 edition of Hardball—lasted six minutes and 21 seconds, exceeding both the amount of time MSNBC aired the API ads (six minutes) and the total amount of climate-related coverage on CNN over the two weeks of programming (approximately five minutes). The Hardball segment featured interviews by host Chris Matthews with Gavin Schmidt, the director of NASA’s Goddard Institute for Space Studies and Chris Mooney, an energy and environmental reporter for The Washington Post. [MSNBC, Hardball, 1/21/16]

In addition to airing the American Petroleum Institute ads, CNN aired dozens of Koch Industries ads during the two one-week periods analyzed in this study. The ads, which are part of Koch Industries’ “We are Koch” campaign, tout work that the oil billionaire Koch brothers’ company is doing in industries such as fertilizer production and clothing fibers. According to The Washington Post, the ads are an attempt by Koch Industries to “promote a warm, patriotic image of its multinational empire” and come at a time when “the company is adopting a more confrontational approach in the political arena, seeking to undermine its antagonists on the left.” According to InfluenceMap, a non-profit that uses objective metrics to track corporate positions on climate change, Koch Industries earned an “F” because it “appears to be actively opposing almost all areas of climate legislation.” [YouTube, 3/1/16, The Washington Post, 9/8/14; InfluenceMap, About our Scores, accessed 4/25/16; InfluenceMap, Koch Industries, accessed 4/25/16]

Of the three CNN segments about the hottest year or most unusually hot month on record that aired during the two one-week periods analyzed in this study, only one made any mention of “climate change” or “global warming”—and none addressed carbon pollution from the fossil fuel industry or any of the other ways in which humans are causing global warming. The one mention of global warming in a temperature record report came on the Jan. 21 edition of Early Start, when anchor Christine Romans reported that the latest figures from NASA and NOAA show that 2015 was the hottest year on record and added that officials say that “the planet is still warming with no apparent change in the long term global warming rate.” CNN’s two segments about February being the most unusually hot month, which aired during the 4 a.m. and 5 a.m. editions of Early Start on March 18, did not explicitly connect the temperature record to climate change or its human causes. [CNN, Early Start, 1/21/16, 3/18/16, 3/18/16]

Media Matters searched CNN transcripts in Nexis for coverage between Jan. 20 and Jan. 26 and March 17 to March 23 using the terms “(climate or global warming) or (hottest or warmest or temperature! or heat or (National Aeronautics and Space Administration or NASA or NOAA or National Oceanic and Atmospheric Administration) w/30 (year! or month! or “on record”).” We supplemented the Nexis search with similar queries on Factiva, IQ Media and CNN.com’s transcripts page for coverage of climate change, global warming, 2015 being the hottest year on record and February 2016 being the most unusually hot month ever recorded. Media Matters used TV Eyes and IQ Media to identify instances when American Petroleum Institute or Koch Industries ads ran and to obtain timestamps for API ads and climate-related segments.