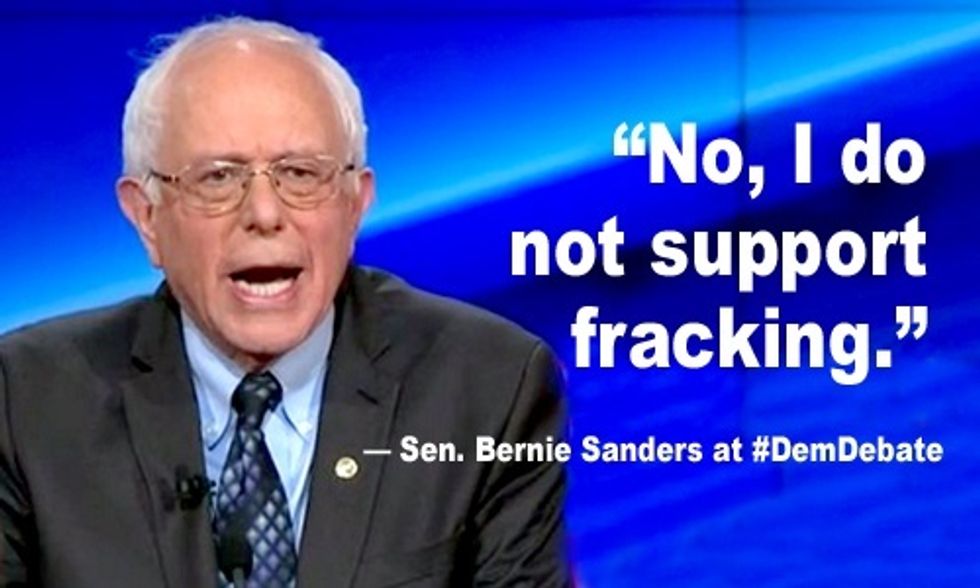 Hillary Clinton and Bernie Sanders engaged in a serious discussion about the environmental injustices facing Flint, Michigan and communities around the country in a spirited debate on Sunday night. While the discussion didn’t reveal serious policy differences between the candidates, it did highlight the divide between Democrats and Republicans, who spent their debate comparing the relative size of their fingers and other body parts.

“This country needs to take a serious look at the environmental injustices affecting communities across our nation,” said Yong Jung Cho, 350 Action campaign coordinator. “We know that race and class are inextricably linked to the fight for healthy communities and a safe climate. Tonight’s debate helped elevate issues that should be at the forefront of this race going forward.”

The debate also saw a confrontation between the two candidates over the controversial and dangerous practice of fracking. Asked whether she supported the issue, Hillary Clinton answered that she would push for tougher regulations, but still allow fracking to happen in some places. Clinton has come under fire from environmentalists for her previous support for fracking, especially during her tenure at the U.S. State Department.

Asked the same question, Sanders’ response was much more direct, “No, I do not support fracking.” Sanders went on to note that climate change was a major issue facing the country that deserved more air time in the media and serious political steps to address the crisis.

[email protected] reiterated his opposition to fracking—under all circumstances at the #DemDebate https://t.co/htsTS5aF0G
— NowThis (@NowThis)1457323504.0

“Clinton will continue to struggle to convince climate advocates that she is serious about addressing the crisis until she comes out for a full ban on fracking,” said Cho. “Clinton has moved from supporting fracking to insisting on regulations that would make it impossible to frack in most places. It’s high time to come out against it all together.

“Scientists are clear that the only way to prevent catastrophic climate change is to leave all fossil fuels, including natural gas, in the ground. We need to see clearer signs that if elected President she won’t do the bidding of the fossil fuel industry corporations, whose campaign contributions she still hasn’t refused to accept.”

While Sen. Sanders and Martin O’Malley signed a pledge to refuse to accept campaign contributions from fossil fuel lobbyists, Secretary Clinton refused to do so. Months ago she told activists that she would “look into” the issue, but her campaign hasn’t provided any additional updates. 350 Action and others are calling on all candidates for public office to refuse campaign contributions from fossil fuel lobbyists.