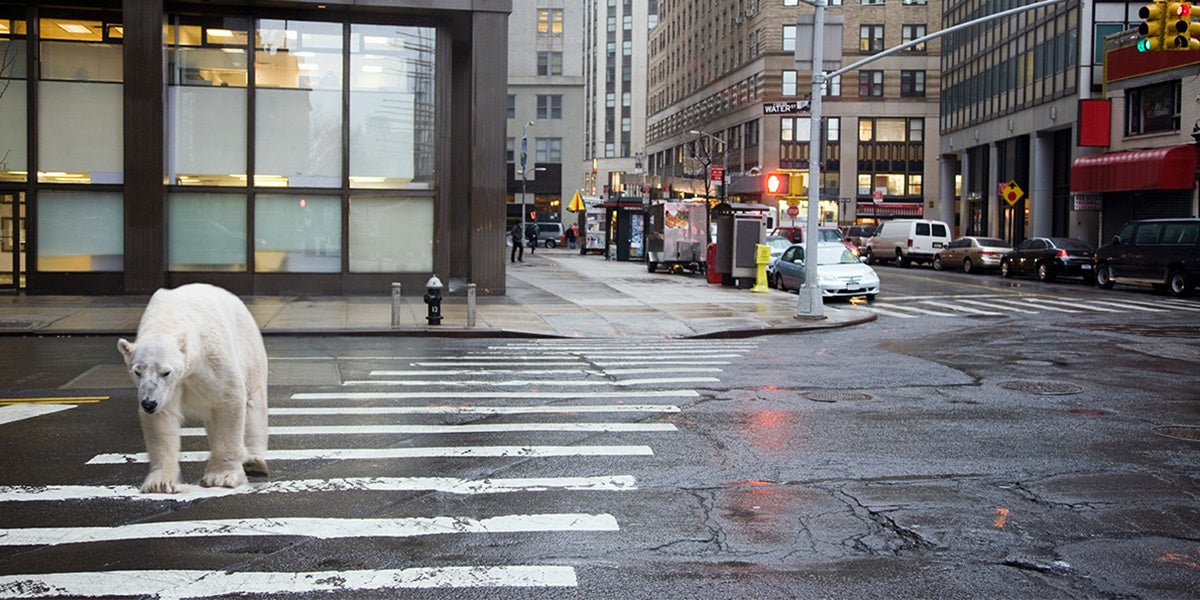 Monday marks the start of the 10th annual
Climate Week NYC. From Sept. 24 to the 30, non-profit The Climate Group has invited businesses, governments, nonprofit organizations, universities and art and music organizations to host a wide variety of affiliated events devoted to raising awareness and prompting action around climate change.

“Climate Week NYC is the largest climate week in the world and as one of the key summits in the international calendar—which runs alongside the United Nations General Assembly—has been driving climate action forward since its launch in 2009,” The Climate Group CEO Helen Clarkson said in a
New York City mayor’s office press release. “We are thrilled to be hosting our 10th Climate Week NYC and to appear on the world’s stage, to continue to advance climate action to the top of the global agenda.”

It’s a jam-packed week—last year’s week hosted more than 140 affiliate events. So if you’re lucky enough to be in New York, it’s a great chance to learn more about climate change and what you can do about it. You can see the full
2018 events program here, but if that’s too overwhelming, below are seven events that demonstrate the full variety of what Climate Week NYC has to offer.

Drawdown: The Most Comprehensive Plan Ever Proposed to Reverse Global Warming is a best-selling book edited by Paul Hawken that outlines 100 existing climate solutions that, if applied globally and to scale over the next 30 years, could bring the earth to “drawdown,” the point at which greenhouse gases in the atmosphere peak and then begin to decline. Even after the book’s publication, Project Drawdown continues to research and promote climate solutions. The event will feature a presentation by Drawdown senior writer Katharine Wilkinson followed by a panel discussion moderated by 350.org founder Bill McKibben.

This stimulating evening of panel discussions features the work of people using their artistic and technological skills to confront the problem of climate change. The first panel focuses on art with the
Climate Museum, the first institution dedicated to cultural engagement with climate change, Storm King Art Center, which is currently showing an innovative climate art exhibit, and artist Justin Brice Guariglia, whose work is both part of the Storm King exhibit and the Climate Museum’s Climate Signals installation featuring 10 solar-powered road signs with text written by Guariglia on display around NYC until Nov. 6. Next, The ixo Foundation, which develops ixo Blockchain for Impact, and SolarCoin, which uses blockchain technology to create a digital currency promoting solar energy, discuss innovation with sustainability financing company South Pole and SDG Futures, which is working on developing a 2019 TV program promoting the UN’s Sustainable Development Goals. Finally, Anthony Leiserowitz, director of the Yale Program on Climate Change Communication, speaks with fellow Yale professor Dan Esty, director of the Yale Center for Environmental Law and Policy, about the “Politics, Policy and Communication” of climate change.

Climate Analytics is a non-profit based in Berlin dedicated to bringing together experts on both the science and policy of climate change. It makes sense, then, that it is hosting an event discussing the latest science on the benefits of limiting warming to 1.5 degrees Celsius above pre-industrial levels and what this means for the successful implementation of the
Paris agreement. The event will feature an update on the significance of the forthcoming Intergovernmental Panel on Climate Change report on the impact of limiting warming to 1.5 degrees, presented by Princeton scientist Dr. Michael Oppenheimer, as well as talks on the climate and policy implications of that goal by Climate Analytics members Dr. Tabea Lissner, Dr. Bill Hare & Jasmin Cantzle.

Buildings are responsible for 70 percent of New York City’s greenhouse gas emissions. This event will focus on how to reduce those emissions, especially in buildings housing low-income communities, in a way that preserves affordable housing. The panel will feature speakers from the mayor’s office and environmental justice organizations like
WeACT and NYC Environmental Justice Alliance.

5. THE POINT: Elements of Change

Come to the closing night of
Elements of Change, a play by Divya Mangwani based on the UNICEF Climate Comic Contest winner “Tré: The Adventures of Brother Earth” by Sona Sridhar. The theatrical event is part of a larger collaboration coordinated by Greenpoint Innovations (GPI) under the banner of THE POINT that seeks to leverage the arts for climate action. Also part of the collaboration: a mural by South African street artist Sonny and Brooklyn art duo ASVP on the walls of Intermediate School 318 in north Brooklyn. You can track the mural’s progress on Instagram. This is the third year in a row that GPI, a purpose-based company founded by Stephen Donofrio to use data, media and the arts to promote sustainability, has coordinated an NYC Climate Week event, according to Broadway World.

Global Citizen is dedicated to ending extreme poverty by 2030 by encouraging people around the world to pressure governments to take action on gender equality, the environment, food security, education, global health and sanitation. By downloading the
Global Citizen app, you can take recommended actions to enter a lottery and earn tickets to the 2018 concert. 48,000 tickets will be given away in total. Headliners include Janet Jackson, The Weekend, Shawn Mendes, Cardi B and Janelle Monáe, with special guest John Legend.

This event is not officially affiliated with Climate Week NYC, but it matches up in spirit. The Climate Museum is inviting the public on a guided tour of Rockaway Park.
Hurricane Sandy devastated the Rockaways more than five years ago, and the walk bears witness to that devastation, as well as the steps the community has taken to rebuild and prepare for the future. The event closes on the boardwalk with a workshop by local artists on processing climate-based emotions through visual art.