CLIMATE TALKS: Absurdity, Urgency and the Battle for Our Future 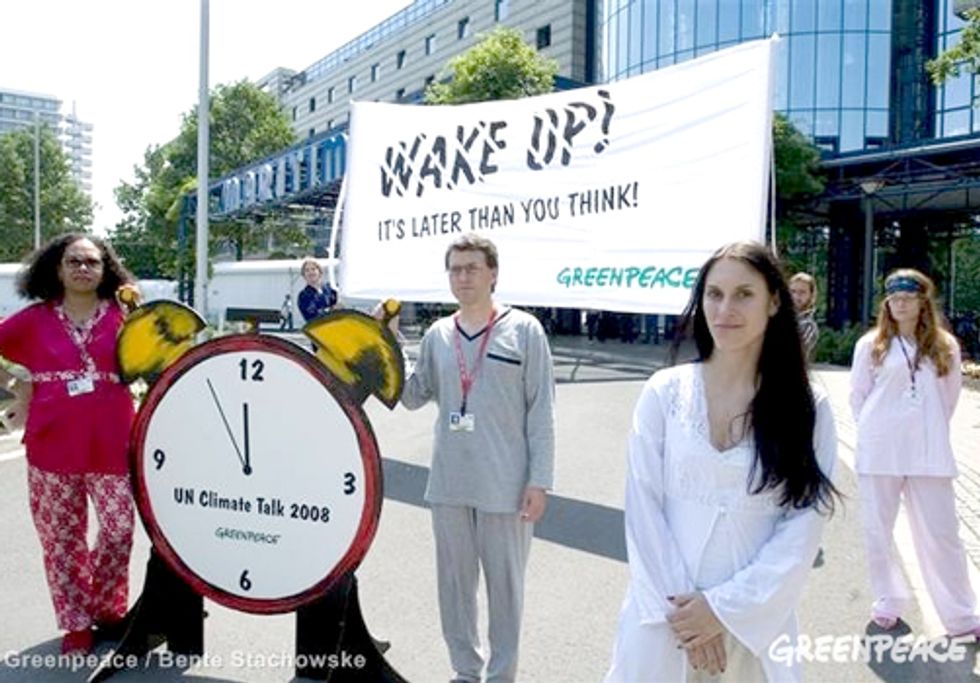 My head is in Doha, but my body is not. My inbox is overflowing even more than usual, as rumors picked up in the vast corridors of the Qatar Convention Center are spread around electronically. The acronyms alone make it easy to make fun of the global climate negotiations. Sitting at my desk it's hard not to smile at questions such as “what happened on ADP?” or “who has the KP non-papers on eligibility?” And no, that's not about getting married ...

If I were in Doha, these are the questions I would be asking. I would be part of what The Economist has quite aptly termed the UNFCCC “theatre of the absurd.” In the evening I would lament with colleagues that the Doha theatre is failing to alter the disastrous play that is our business-as-usual future. Some old hands would recount how they used to think, that the negotiations would get less absurd once the urgency of climate action was more widely accepted.

Instead, today, one of the most disturbing absurdities of all is how the very leaders who are responsible for the crisis come to places like Doha to warn of the fossil-fueled future we face in the starkest terms. When even the World Bank President fails to “shock the world into action” by pointing out just how unattractive a much warmer world will be, you have to wonder whether governments will ever get real. Certainly, I have to accept, the bits of absurd theatre I, together with others, have engaged in at climate meetings over the years—such as the “wake up call for the climate” pictured here (from 2008)—didn't quite succeed in changing the power dynamics just yet Power. That is indeed the reason for the absurd situation we face. Too much of it, wielded—with brute grim reaper force—by the wrong people. If our governments were acting on behalf of their citizens we would not be watching them play childish “I won´t if you won't” and “I will, but only after you” games with our future.

Post Hurricane Sandy, even the vast majority of Americans back climate action. The fossil fuel industry, however, has captured too many governments in North and South. On Capitol Hill, just like in Caracas, Brasilia or New Delhi, oil, coal and gas still rule still, not the people.

There are victories—Petrobras is forced to abandon deep sea drilling in New Zealand; old coal-fired power stations in the U.S. are being decommissioned and new ones stopped by an unprecedented alliance of grassroots groups, federal regulators and investors who no longer believe the lie that “coal is cheap.” But at international negotiations, government positions illustrate who still holds the power overall. In this way, the absurd state of negotiations is instructive. It is also a sad and powerful reminder of how we as a movement are not yet making the difference we need to make. As things stand, governments clearly still fear Shell and Exxon more than you and me ...

The painfully wide gulf between the rhetoric and reality of the climate talks has led some to suggest that we can ignore the negotiations. The real fight, as Michael Jacobs argues in the Guardian, for example, is “being waged in energy and finance ministries around the world, and in the boardrooms of energy companies and their bankers.” On the importance of that battle between carbon-intensive energy and a clean energy future he is absolutely right (as right as he is wrong on nuclear power).

The key question for the next few years is whether we choose an energy future that leaves two-thirds of known carbon reserves in the ground. Greenpeace already in 1997 established this “carbon logic”—and when the Kyoto Protocol was agreed vowed “to ensure that the majority of remaining fossil fuel reserves stay below the ground and to remove the obstacles to increased investment in clean energy technologies.”

That's why we are working now to stop investments in Arctic oil and to end the age of coal everywhere—especially in the U.S., Poland, India and China, where the majority of new coal plants are planned. A few years ago, I personally took a break from following the UNFCCC madness to fight coal in my native Germany —and I know the thrill of finding out that another coal plant has been stopped.

But how is the battle for a clean energy future different from the battle for a decent global climate agreement? The enemies—the coal, oil, gas and nuclear industries—for sure are the same. And there is no question that the climate negotiations over the years have not only shone the public spotlight on business and government (lack of) action on climate change, they have also created an expectation to act.

The 2009 climate summit in Copenhagen failed to deliver the deal we still need. But the political energy generated by the talks helped to ensure cross-party support for the UK’s ground-breaking climate legislation (which we are now fighting to defend); contributed to DONG, Denmark’s nationally owned utility, abandoning coal investments; and delivered climate and energy targets in more countries than ever before.

The fact that all of this is not enough is true, of course. But the explanation for this failure lies primarily in power relations, not in too many acronyms, negotiation strands or windowless rooms in overly air-conditioned convention centers. Those who suggest that we need to choose between engaging with the climate negotiations or fighting for a clean energy future are creating a false dichotomy. We need to do both.

The chances of getting anything like a fair, ambitious and legally binding climate agreement will only improve when we see real change being made in Washington, Beijing, Brussels or Pretoria. If we get leaders to shift to a clean energy path at home, they will become less resistant to an ambitious deal at the global level. There is a reason that Germany has a better position on global climate action than many other countries: it has already started on a faster (though by no means perfect) energy transition to the renewables future we need.

So, sitting at my desk, I salute my colleagues in Doha—not just for not getting lost in the vast conference center, not just for speaking truth to power (“governments need to cut the crap and cut the carbon”), but especially for pushing for a way forward to a real deal in 2015—against some powerful enemies who hate our children.

Yes, I even look forward to joining the absurd theatre of the negotiations again next year in Poland. There can surely be no better place than a climate summit in Poland (more than 90 percent dependent on coal!) to remind us that the fight for global climate action and the fight against coal are two sides of the very same coin.

Maybe then we will realize that the REAL theatre of the absurd is the fact that we have all the solutions we need, but we're allowing a few powerful players who caused the problem in the first place to block them.

Daniel Mittler is the Political Director of Greenpeace International