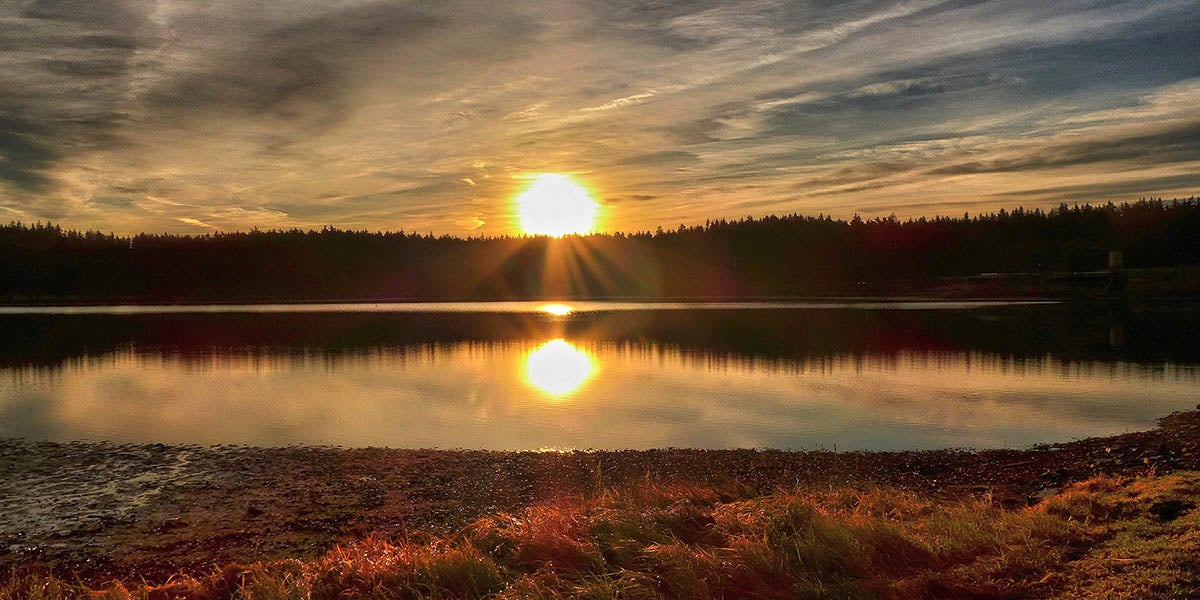 The latest assessment report from the Intergovernmental Panel on Climate Change (IPCC) estimates that climate sensitivity has a “likely” range of 1.5 to 4.5°C.

The new study, published in Nature, refines this estimate to 2.8°C, with a corresponding range of 2.2 to 3.4°C. If correct, the new estimates could reduce the uncertainty surrounding climate sensitivity by 60 percent.

The narrower range suggests that global temperature rise is “going to shoot over 1.5°C” above pre-industrial levels, the lead author told Carbon Brief, but “we might be able to avoid 2°C.” Meeting either limit will likely require negative emissions technologies that can remove CO2 from the atmosphere, he said.

The new estimate is another “brick in the wall” of scientists’ understanding of climate sensitivity, another scientist told Carbon Brief, and “the best-informed views will be reached by multiple lines of evidence.”

Climate sensitivity is the amount of warming that can be expected in response to the concentration of CO2 in the atmosphere reaching double the level observed in pre-industrial times.

The research makes a new estimate of the “equilibrium” climate sensitivity (ECS)—that is, the amount of warming expected to occur once the full impact of the extra greenhouse gases release has played out. This measure includes the impact of warming on long-term climate feedback loops, which can take decades, or even centuries, to materialize.

The value of ECS is one of the big climate change questions that scientists are still trying to address.

It is important because understanding how sensitive the Earth is to CO2 could help us to estimate how much the planet could warm in response to greenhouse gases, explained professor Peter Cox, lead author of the new paper and a climate scientist at the University of Exeter. He told Carbon Brief:

The new findings indicate that the value of ECS could be close to 2.8°C, said Cox:

“We get a value with a ‘likely’ range, which means there’s a 66 percent probability that it’s in that range of 2.2 to 3.4°C with a central estimate of 2.8°C. That’s not so far from the central estimate of the IPCC which is 3°C, but the range is much reduced, from 1.5 to 4°C, to 2.2 to 3.4°C. What that means is we can rule out very low climate sensitivities and we can rule out very high climate sensitivities.”

There are a number of techniques that scientists can use to work out what ECS could be.

One method is to look at how Earth has responded to natural greenhouse gas changes in its geological past to try to work out how it might respond to future global warming.

Another common technique involves using global climate models to estimate the theoretical effect of a doubling the amount of CO2 in the atmosphere.

A third method used by scientists involves matching global surface temperatures with the global warming trend over the past century to try and work out sensitivity from how the planet is responding. (This is what is known as the “energy budget model” approach.)

The new study uses a similar method to the energy budget model approach. However, instead of matching the global temperature record to global warming, the new research attempts to match temperature records to natural, long-term fluctuations in temperature.

Looking at natural variability rather than the warming trend allowed the scientists to exclude a range of uncertainties associated with human-caused climate change, Cox explained:

“Normally the way this [research] is done is by looking at the historical record warming, which makes sense. We’ve seen 1°C of warming, roughly speaking, and so you may think that must tell you how sensitive the climate is. But it doesn’t. The main reason it doesn’t is that we don’t know how much energy or heat we’ve put in the system in terms of radiative forcing—greenhouse gases.”

To understand how historical temperature fluctuations have changed over the past century, the researchers first removed the global warming trend from a set of observational temperature data. 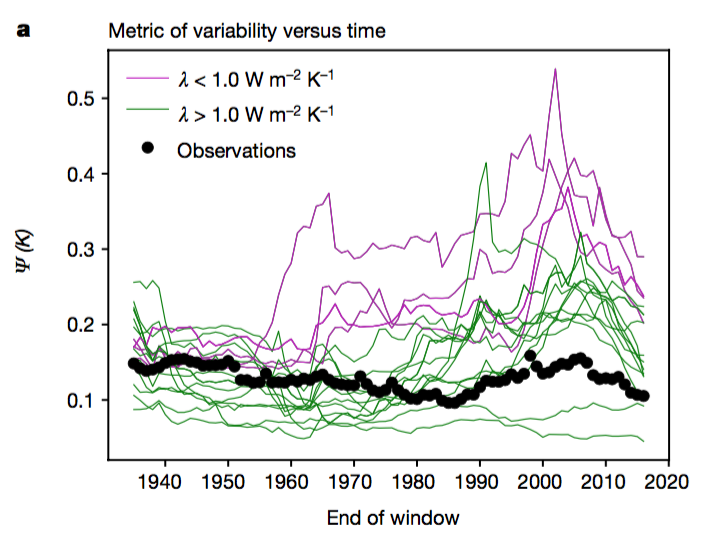 Together, these results allowed the researchers to produce their narrower range.

Understanding ECS could help scientists to work out how much the climate is likely to warm in the future, Cox said, which in turn could allow policymakers to estimate how easy it will be to meet the goals of the Paris agreement.

This means that, if humans stopped releasing CO2 today, the world should expect to experience more than half of the warming dictated by the ECS. Cox explained:

“That means that if you’ve got an ECS of 4°C, then you’ve pretty much already missed the 2°C target of Paris. So the ECS value has a big impact on the feasibility of Paris.”

If the results are correct and the climate sensitivity is 2.8°C, then it is likely that the world will fail to limit warming to 1.5°C above pre-industrial levels, which is the aspirational goal of the Paris agreement, Cox added:

“Our numbers suggest that we’re going to shoot over 1.5°C. We might be able to avoid 2°C—it will take a huge effort to do so. I think, to achieve 1.5°C, you definitely have to think of negative emissions technologies and, if you want 2°C, you need to think about it, too, even if it’s only a short-term stop gap.”

Negative emissions technologies are a group of techniques—many of which still remain hypothetical—that aim to remove CO2 from the air in an attempt to tackle climate change.

The study’s results “reduce the probability of very high climate sensitivity,” which should “reassure” those taking steps to meet the goals of the Paris agreement, said professor Gabi Hegerl, a climate system scientist from the University of Edinburgh, who was not involved in the research. She told Carbon Brief:

“If you can reduce the uncertainty, which I think we can, then you can focus your mind on what needs to be done. We can rule out very low values, where you might say, ‘don’t worry about it, we’ll adapt’ and you can rule out very high values that might lead to you to a sort of hopeless[ness] where you think, ‘it’s too late.’ We are still in that zone where action is urgent, but not too late. But it is very urgent.”

‘Brick in the Wall’

The new paper adds to the extensive research around the potential value for ECS.

Despite debate among scientists about the best way to estimate climate sensitivity, each new research paper can be seen as a “brick in the wall” of our understanding, said professor Andrew Dessler, an atmospheric scientist from Texas A&M University, who was not involved in the research. He told Carbon Brief:

“I don’t think any single paper will by itself redefine what we think about ECS. Rather, the best-informed views will be reached by multiple lines of evidence, with care taken in relating the inferred ECS from different methods.”

The methods used in the study are “credible,” said professor Steven Sherwood, deputy director of the Climate Change Research Centre at the University of New South Wales. However, it does have its limitations, he said.

For example, the paper does not discuss how natural events, such as El Niño, could impact temperature fluctuations, he told Carbon Brief:

“The approach mixes up natural variability due to El Niño, decadal variations, volcanic eruptions and air pollutants, and we know that models have different biases with respect to each of these. There are also theoretical problems with applying their statistical approach in this way, even though it seems to work. So it is not clear whether to put more weight on this study, or the previous ones suggesting even higher sensitivity.”

In addition, the research may have made “significant” errors in its attempts to reduce uncertainty surrounding climate sensitivity, said Dr. Patrick Brown, a climate scientist from the Carnegie Institution for Science in Stanford, California.

Last month, Brown was the lead author of a Nature paper which found that ECS could be relatively higher than previous estimates have suggested—their central estimate was 3.7°C. Brown told Carbon Brief:

“They appear to be comparing the IPCC ECS ‘likely’ range of 1.5 to 4.5°C to their constrained ECS model range. This is not an appropriate comparison because the 16 models that they use do not span the entire uncertainty range of ECS.

“For example, no model that they investigate has an ECS below 2.2°C. Thus their claim that they reduced uncertainty in ECS by 60 percent comes partly from the coincidence of which models happened to be included in their study.”

However, writing in an accompanying News & Views article, professor Piers Forster, director of the Priestley International Centre for Climate at the University of Leeds, who was also not involved in the research, argues that some published estimates for ECS have “depended on the researchers’ assumptions about ECS, rather than the evidence.” He wrote:

“By contrast, Cox et al started from climate-model values that are at the upper end of the IPCC range and used evidence to effectively rule out catastrophically high values.”

Forster added that the methods used in the present study are “enviably simple” and will leave climate scientists asking, “why didn’t I think of that?” He said:

“In my view, Cox and colleagues’ estimate and the estimates produced by analysing the historical energy budget carry the most weight, because they are based on simpler physical theories of climate forcing and response, and do not directly require the use of a climate that correctly represents cloud.”