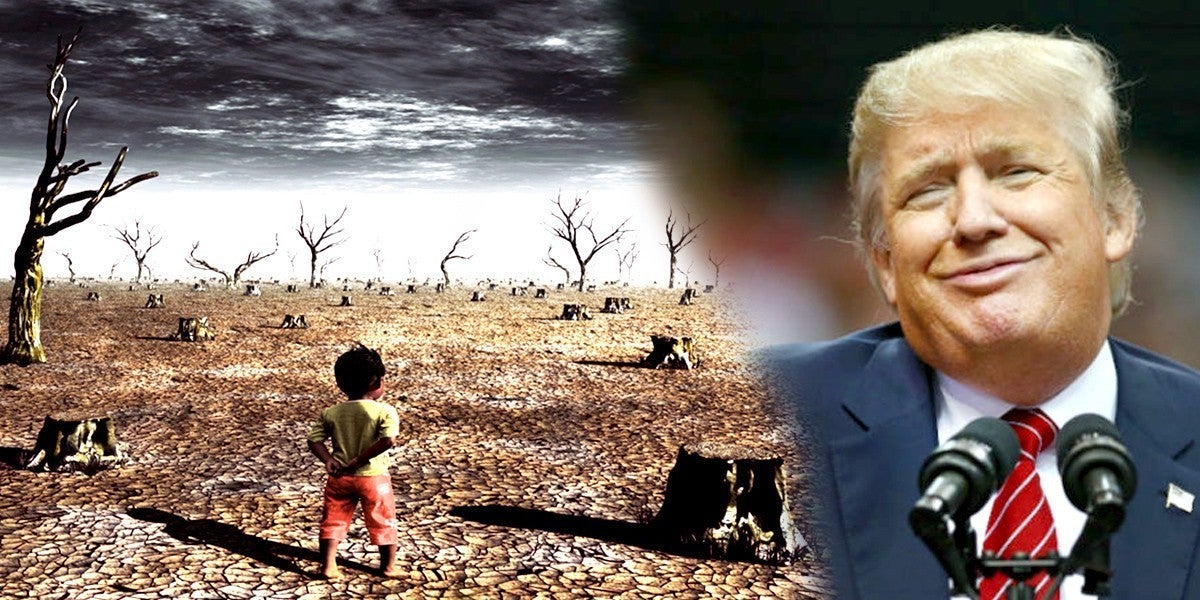 In what’s widely being described as the most shocking upset in U.S. election history, Donald J. Trump has beaten Hillary Clinton to become the 45th president of the U.S.

As one of the world’s largest greenhouse gas emitters, any change at the top of U.S. politics warrants a consideration of what it might mean for the country’s climate and energy priorities.

But given Trump’s comments on the campaign trail, the U.S.’s recent reputation under Barack Obama as a nation serious about tackling climate change now looks to be in peril.

For example, Trump said he thought climate change was a “hoax” perpetrated by the Chinese. In addition, he pledged to end federal spending on low-carbon energy and to pull the U.S. out of the UN’s Paris agreement on climate change. Carbon Brief has been asking climate scientists for their reactions.

Dr. Malte Meinhausen, senior researcher in climate impacts at the University of Melbourne and the Potsdam Institute for Climate Impact Research:

“Trump said a lot of things. It looks like the Trump administration could do anything. From playing a destructive role in international climate protection to just letting others get on with the job … However, despite the momentum for climate protection having, in part, an autonomous motor due to the economics of lower cost renewable energies, a hostile Trump administration towards the Paris agreement could do a lot of damage.

“Trump won’t be able to withdraw from the Paris agreement for three years (Article 28) now that it just entered into force—one of the world’s major success stories. A hostile Trump administration could, however, withdraw from the UNFCCC Convention and thereby also from the Paris agreement indirectly. In theory, that could happen quicker. It’s unlikely that the administration would do so much self-harm, so. But Trump seems to defy conventional wisdom, so we don’t know.

“The Paris agreement without the U.S. would live on, but the spirit and the international focus on one of the defining challenges of our time could get lost. And the economic opportunities for the U.S. will get lost too … Not a good outcome for the U.S. in that respect. Not a good outcome for the climate. Too early to tell how bad it will be, though. One can hear the world gasping for air.”

“President-elect Donald Trump’s stance on global warming is well known. Ironically, he contributed to the popularity of our recent Turn Down the Heat report series for the World Bank by attacking it on Twitter.

“Yet apart from this, science cannot expect any positive climate action from him. The world has now to move forward without the U.S. on the road towards climate-risk mitigation and clean-technology innovation.

“The U.S. de-elected expertise and will likely show a blockade mentality now, so Europe and Asia have to pioneer and save the world. Formally leaving the Paris agreement would take longer than one Presidential term, yet of course the U.S. could simply refuse reducing national emissions which would mean a de facto exit out of international climate policy. Now the U.S. are one of the world’s biggest economies and even just four years of unbridled emission staying in the atmosphere for many hundreds years would make a substantial difference. The climate system doesn’t forget and it doesn’t forgive. The U.S. is prone to potentially devastating climate change impacts. Hurricanes hit U.S. coastal cities, the California drought affected farmers and a state like Florida is particularly exposed to sea-level rise. Sadly, in the long run nature itself might show the U.S. citizens that climate change as a matter of fact is not a hoax. But it might be too late.”

Dr. Rachel James, research fellow in climate modeling at the Environmental Change Institute at the University of Oxford:

Dr. Twila Moon, lecturer in cryospheric sciences at the University of Bristol:

“Having a person in the position of U.S. President who does not acknowledge scientific facts establishing the clear reality of human-caused climate change is a disgrace. This is a sad and scary outcome for science and for action on halting harmful climate change.

“But I am hopeful that the American people—from all parties—are realizing that climate change is happening in our own backyards and the will of the people will push the political needle. I think our response must be to work harder, together to move forward on climate action locally, regionally, and, as best as possible, nationally. As a human being, I think it is our moral obligation.”

“I don’t think anyone knows what this means for U.S. policy on climate science or emissions reductions. I think we all expected that the Clean Power Plan would end eventually up in front of the Supreme Court and its fate there is more doubtful now that Trump gets to appoint the next Justice. On the other hand, renewable power is getting cheap fast and my optimistic hope is that renewable energy gets so cheap that we switch to it without any national government policy. I guess we’ll see!”

Prof. Shaun Marcott, professor in palaeoclimate at the University of Wisconsin-Madison:

“This election in terms of future global climate change was critical as the new president will be making decisions that will have long lasting consequences, both in the policy being set in the homeland and policies that they will help set with their international counterparts.

“Much like Britain and the Brexit vote, the U.S. now finds itself at a crossroad and heading in a direction that, in my opinion, does not appear to be sustainable. This is obvious, I think, to most people. I think the best way I’ve heard it described is that decisions made by this incoming president will set in policies that could have lasting climate change effects extending 10,000 years into the future. The stakes were high and unfortunately both of our leading candidates didn’t even discuss, or did so very rarely, climate change at large in any of the debates.”

“A significant theme of recent political discourse has been the use and misuse of evidence. In moving forward, rather than bemoan a ‘post-truth world,’ those of us who have roles in gathering, curating and disseminating evidence must strive to understand the process of human decision-making better.

“We absolutely need to make policy on climate and other matters that is consistent with the evidence base. But within a democracy, this has to be achieved through the will of the people. That requires broad and deep engagement by us with all sections of the wider society to understand the contextual circumstances and to proactively place the evidence in frames that are relevant to people.

“If we are to meet the objectives of the Paris agreement, it is abundantly clear that a major transformation of society will be required. This is a significant technological challenge, but the political events in the U.S. and UK that have surprised the establishment also serve to remind us the importance of recognizing the implications of change for all sectors of society. If we can learn from this, there is hope that we may be able to successfully navigate the perilous journey ahead of us in responding to the climate challenge.”

“The result of the U.S. presidential election is very worrisome on many counts, including of course for climate negotiations. The Paris agreement is a construct that was many years in the making and is, therefore, extremely fragile. Even though the U.S. cannot formally leave the agreement in the next 4 years, not having the U.S. on board and pushing for the full implementation of the Paris agreement may well affect billions of people for hundreds of years. The outcome of this election is clearly not the end of the world but the consequences for humanity are potentially dreadful.”

Prof. Jason Box, professor in glaciology at the Geologic Survey of Denmark and Greenland:

“To quote James Hansen, I fear this may be game over for the climate.”

Prof. Eric Steig, professor of earth and space science at the University of Washington:

“It’s impossible to know just how far Trump and the Republican controlled House and Senate will want to push an anti-intellectual, anti-science agenda. I suspect there will be more immediate political concerns. In the medium term, I don’t expect there will be major cuts to science funding; I think Trump will likely govern less as an ideologue and more as an opportunist in this respect. It now is exceedingly unlikely, of course, that any international climate change mitigation agreements will proceed; or if they do, it will not be with the U.S on board.”

Dr. Niklas Höhne, professor for mitigation of greenhouse gases at Wageningen University and founding partner of the NewClimate Institute:

“This election result seriously threaten the U.S.’s federal climate action. In the worst case, Trump will work towards reversal of the Clean Power Plan. If the Clean Power Plan was to be permanently stopped, emissions projections would be significantly higher than in its absence and we would be seeing an increasing emissions trend over the next decade—at around 6 percent below 2005 levels in 2025. All eyes are now on the federal states to pursue further climate policies, but the impact on the USA’s overall contribution may be limited. This means that the climate target that the USA communicated as part of the Paris agreement process, the ‘nationally determined contribution,’ will probably not be met and U.S. emissions will remain stable at current levels until 2030.

“In spite of this grave eventuality of no climate action from the new U.S. federal government on the horizon, there is still hope that global greenhouse gas emissions can be reduced. Technological developments can be triggered by transformative coalitions, smaller groups of countries that actively support a technology, to eventually achieve global scale. We have seen this model work for renewable energy. The renewable energy agenda was initially supported by a few pro-active countries such as Germany, which brought the costs down to the extent that renewable technologies are now the ‘new normal’ for new power plants in many places in the world. Similar developments can be seen with electric mobility where Norway, California and, in particular, China are aggressively supporting electric cars. It is fair to believe that these would also become the ‘new normal’ in a few years time.”

“IPCC is a scientific body with 195 countries making up its membership so I don’t expect it to make any pronouncement on political developments. But as a scientist involved in IPCC, I can say that U.S. scientists have made a huge contribution to climate science in general and IPCC in particular across all the assessment reports. This is something that the U.S. can be very proud of. It’s far too early to tell how the next administration will approach these issues. In my experience there has been a remarkable consistency in the U.S. approach to IPCC across different administrations. And, again, with much practical climate action in the U.S. taking place at the city and state level, it’s too early to say how things will pan out in the policy domain.”

“The bright light of hope the Paris agreement shone on the bleak and discouraging landscape of climate change has been dimmed but not extinguished.”