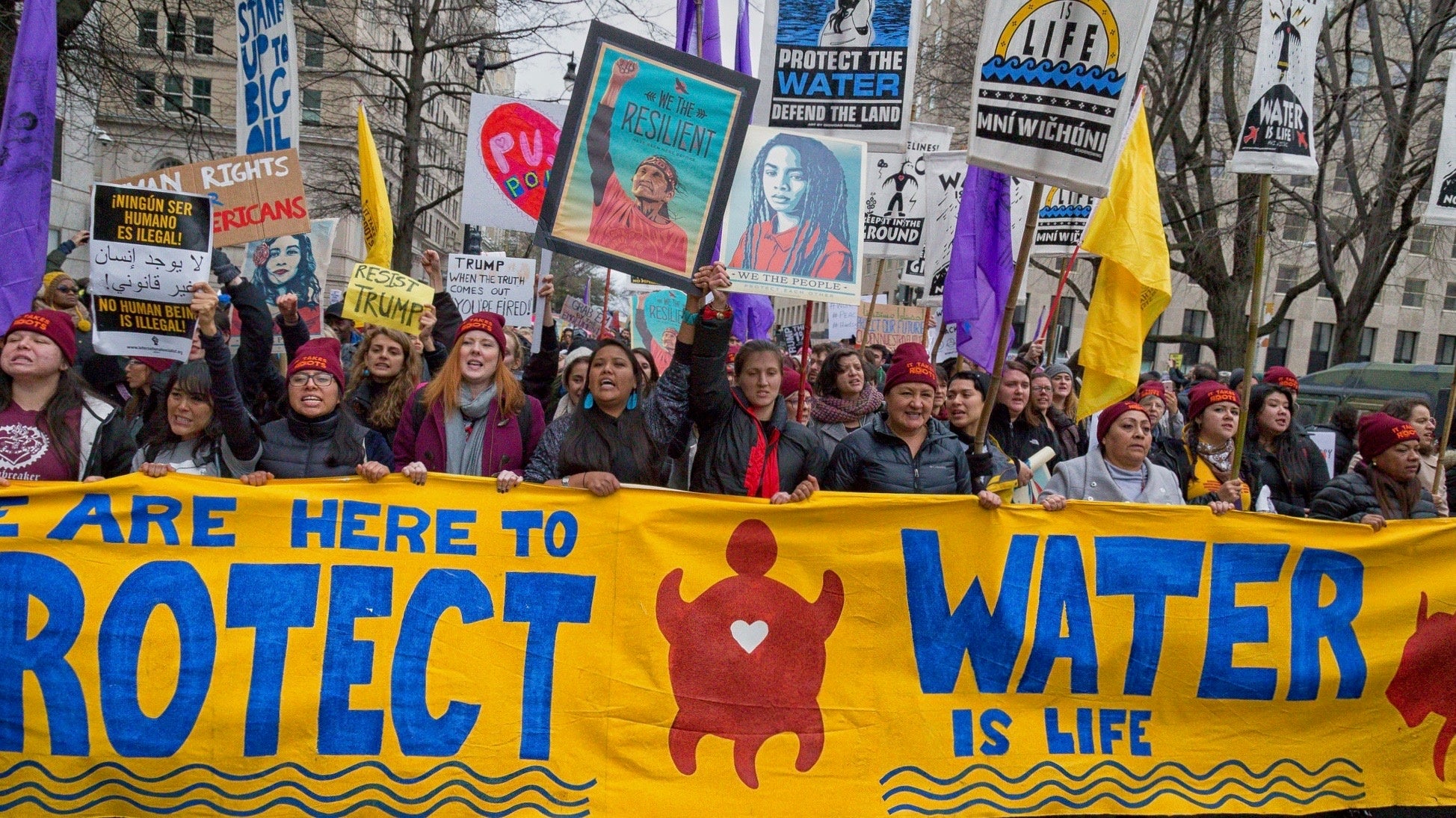 Pro-environment demonstrators on the streets of Washington, DC during the Jan. 20, 2017 Trump inauguration. Mobilus In Mobili / Flickr / CC BY-SA 2.0

One year after the Flint Water Crisis I was invited to participate in a water rights session at a conference hosted by the US Human Rights Network in Austin, Texas in 2015. The reason I was at the conference was to promote efforts by the American Association for the Advancement of Science (AAAS) to encourage scientists to shine a light on how science intersects with human rights, in the U.S. as well as in the context of international development. My plan was to sit at an information booth and share my stories about water quality projects I spearheaded in communities in Bangladesh, Colombia, and the Philippines. I did not expect to be thrown into conversations that made me reexamine how scientists use their knowledge as a public good.

The water rights session was titled Water Justice: Effective Advocacy for Our Right to Water and began with forum speakers discussing environmental justice issues related to water availability, cost, and quality in various regions of the U.S. I heard first-hand accounts of the Flint water supply contamination, the prohibitive cost of water in lower-income communities in Boston, and the scarcity of clean drinking water on Arizona’s Native American Reservations.

The forum led to an audience roundtable discussion that began with self-introductions by the attendees. I introduced myself as an environmental scientist based in Arizona who was interested in their concerns. Immediately after the introduction I was surprised to be told by several individuals that they distrusted scientists and that we were a contributor to their problems. I shared about my life growing up poor in New York City housing projects dealing with problems similar to theirs, and I was able to gain some credibility by relating to their experiences with my own. At that point the approximately 50 attendees, who were affected by water issues discussed in the forum, felt free to explain how their experiences caused them to distrust scientists.

Several residents from Flint, Michigan shared their anger about the scientists from the Michigan Department of Environmental Quality lied to the community about high lead levels in the water. The also felt ignored by scientists from the EPA Region 5 office who should have had more oversight of the water management decision. I am sure this distrust was exacerbated by the 2017 accusations that the Virginia Tech scientists who assisted the community over-exaggerated the harmful effects of water which caused unnecessary panic in the community.

Representatives from the Shiprock New Mexico Chapter of the Navajo Nation discussed how they felt betrayed by EPA Region 6 scientists who failed to recognize contaminated water supplied to the community for use in agriculture and drinking. The Shiprock residents were already critical of the EPA’s handling of a 3-million-gallon release of toxic wastewater into a tributary upstream of the Navajo Native land. A group representing a lower-income African American community of Boston voiced that government scientists and social scientists involved in water infrastructure design are unconcerned about the affordability of drinking water and sewage in lower-income areas.

I used what I learned from the stories about the distrust of scientists as a platform to educate colleagues about how scientists can learn to integrate community-based and interdisciplinary considerations into their work on environmental justice and policy issues and created this one-pager as a guide for scientists who wish to do effective environmental justice work. There are three key components:

Understanding Public Views and Sentiments About Science and Scientists

According to a 2015 study by the Pew Research Center, a random sample of 2,002 adult Americans perceive science as having positive impacts on peoples’ lives. Americans also believe that government funding of science is worth the payoff provided by scientific knowledge and technological applications. But unfortunately, the benefits of science are not always equally distributed to all communities.

Dr. Robert Bullard, one of the most prominent environmental justice scholars, points out in his book Environmental Health and Racial Equity in the United States: Building Environmentally Just, Sustainable, and Livable that many scientific developments for reducing pollution and improving health care do not always make their way into areas affected by discriminatory practices or poverty. Populations that are disproportionately affected by environmental injustices are predominantly communities of color, tribal communities, and low-income communities.

Historically, the benefits of science and technology have not been shared equally as is discussed in the 2016 Nature article Is science only for the rich? A 2018 The Atlantic article Trump’s EPA Concludes Environmental Racism Is Real discusses that at times science has been used against environmental justice communities. In addition, the “Belmont Report”, produced by the National Commission for the Protection of Human Subjects of Biomedical and Behavioral Research, documents a long history of unequal benefits of medical research.

Scientists can play a role in conducting research that is community-driven and in using their social capital and access to scientific institutions and policymakers to make community demands and needs heard directly and with the weight of evidence behind it. For example, from 2007 to 2010, I collaborated with a geology colleague to engage indigent people in the Philippines to develop a sustainable integrated waste and water management system based on stakeholder customs and resources. The communities had no access to affordable resources and were suffering the consequences of no management program. Previous efforts by other entities to improve water management in the community proved ineffective due to a disconnect between the plans of the entities and the needs of the stakeholders.

There is also an inclusivity problem in science — it is not yet representative of the diverse world in which we live. The latest statistics on the ethnicity of scientists show that populations subject to environmental injustice make up less than 15 percent of the U.S. Approximately 70 percent of scientists in the U.S. are white and 72 percent of white scientists are male, and most do not come from low-income backgrounds. Science needs the experiences and expertise of people from impacted communities to ask the questions and work on solutions that better serve the needs of those communities. And people need to see themselves, see people like them, in the scientific community to gain trust that the institution of science represents them too. This disparity creates an incongruity between people affected by environmental injustice and the scientific community.

Scientists need to be aware of how they are perceived when working with community, and slowly and deliberately build relationships and trust with environmental justice and fenceline communities.