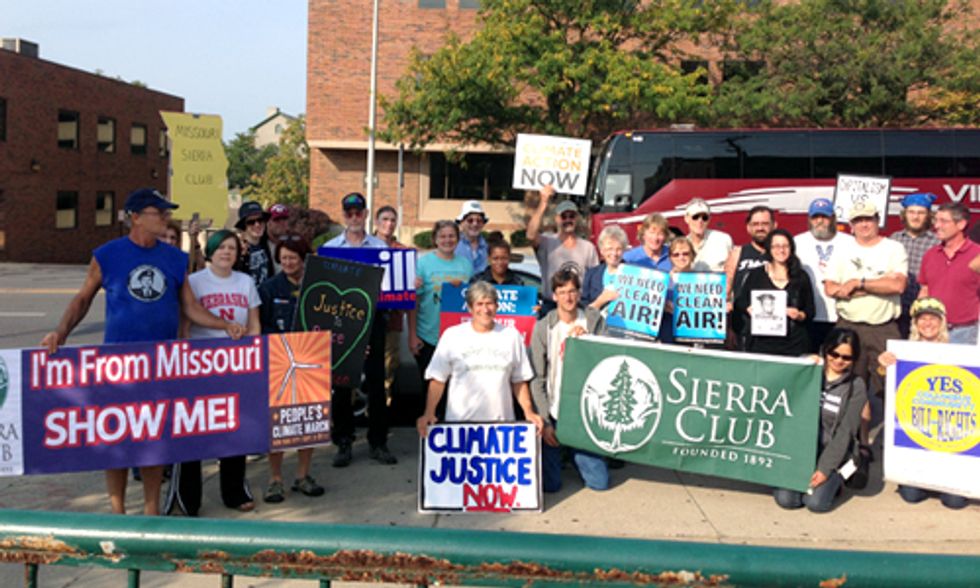 Two vans and a big bus filled with truly great people—the new Climate Riders—on their way to New York City for the People's Climate March pulled up to the First Watch for breakfast this morning in Columbus, Ohio.

Twenty-four hours on the road each way to march for a few hours against the corporations that are killing our planet.

Kansas/Missouri Climate Riders stop for breakfast in central Ohio on their way to NYC. Local author Harvey Wasserman is kneeling in front in his "Solartopia! Our Green-Powered Earth" t-shirt. Photo credit: Samantha Allen

“I hate the Koch Brothers,” one of them tells me over pancakes. “They are wrecking the Earth for all of us.”

Another, Chris, borrows my bike to ride down the street to a bakery, then does it a second time to feed the drivers.

I’ve come just five miles from my house on the east side of Columbus biking about a half-hour on my two-wheeler through the flatlands of Ohio's state capital, where a corrupt, climate-killing legislature has been working to outlaw renewables, ban the sale of Tesla cars, kill passenger rail service, subsidize dying nukes and embrace fracking with all its corporate might.

These good folks have come from Kansas and Missouri. Overnight to Columbus, then all day to Allentown, Pennsylvania, where they’ll stay the night. Then two more hours into the city tomorrow morning. March through the day. Get back on the bus and into the vans around 9 p.m. Then ride a full day back to the far midwest.

Many have taken unpaid days off from work to do this. Some would like to stay a while in New York City but can’t afford it.

But they’ve all come to send a message to the corporate climate-killing billionaires.

“We need to make an impact,” one tells me. “Things gotta change.”

Tonight still more buses will leave for Columbus for the shorter but still grueling overnight haul to Manhattan. Then, after the march, they’ll turn around and come back so folks can get back to work by Monday morning. The folks from Kansas, who left yesterday, won’t get back to work until Tuesday.

At least one trainload with more than 100 people, has been rolling from the San Francisco Bay for days now. They will march in New York City, then turn around and cross the whole country again.

This is a staggering show of concern and commitment. These folks are on the move to fight King CONG (Coal, Oil, Nukes and Gas).  They are clearly willing to pay a serious price to win.

Everybody knows we can now power our planet entirely with renewables.

These folks from Kansas see firsthand the promise of windpower being filled on the prairies where they live.

One works as a solar installer. He put in 500 rooftop systems last year alone. He’s brought his teenaged son, who beams proudly as his dad explains the business.

Another tells me about her job teaching people to do urban gardening. “It takes about three years,” she says. “Then they’re on their own. It really works.”

The chief organizer works in sign language. She tells me about the exciting advances in telecommunicating that now allow the deaf to do conference calling. I’ll send her this article and she’ll forward it on to the rest of the group.

Another bends my ear about bio-char agriculture, and how midwestern farmers have been quietly revolutionizing crop fertilization in ways perfected centuries ago by the native Americans through the use of controlled burn.

Two of the younger riders are handing out fliers about the murder in Ferguson. They are pierced, tattooed and dressed in black. They are also articulate, committed and extremely well-informed.

The Sierra Clubber here is a Marine Corps vet, just out of Ohio State University. Down the table is another Kansan, a factory worker, twice her age, ready for a new career in social change.

And so it goes. Every one of these people with a great story to tell, and an astonishing commitment to saving this planet.

The corporate media likes to make these issues complex and confusing. But nobody on this bus has any doubts. We need to save the planet. We need to convert to renewables. The corporations are in the way.

The corporate media sees us all in terms of numbers.

But these buses are filled with people. Tough, committed, knowledgeable people. Savvy about Fukushima. Inspired by the German transition to green power. Fully informed as to where the green jobs will be and how energy prices will drop once we get them.

The corporations may have their money invested in coal, oil, nukes and gas.

But the truly smart investors are all riding with us.