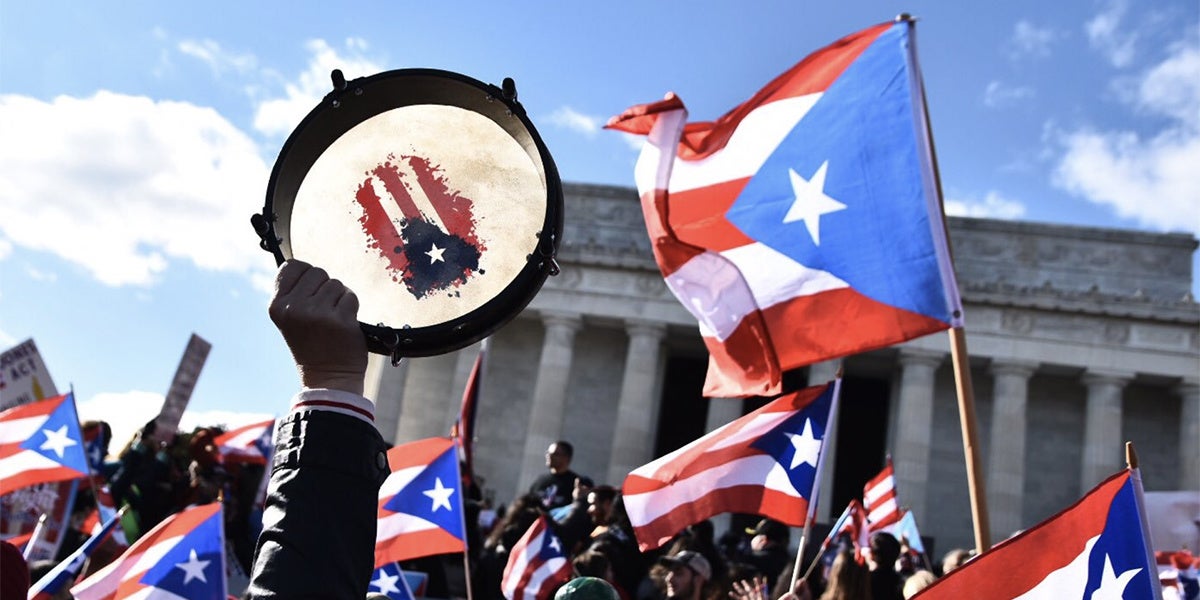 Marámellys Castro-Pérez is a Puerto Rican refugee living in Orlando with her husband and twins after the one-two punch of Hurricanes Irma and Maria. Maria, in particular, scrubbed the island clean of electricity, working toilets and phone service. It dragged Castro-Pérez’s world into the dark ages and pitted the island’s modern, cosmopolitan populace against the once-tamed perils of hunger, biting insects and disease.

“I was very sad because the island was in desolation. It was a hard hit,” Castro-Pérez explained through an interpreter. “It truly hurt to see my home like that: flooded, with no light or water, seeing my children suffering. I’ve cried. I’ve suffered. But hopefully this [move] will make it better.”

Castro-Pérez is now living in Florida, but what happened back on the island still haunts her and will likely reflect in how she votes. And she’s not the only one. A wave of climate refugees fleeing the island to Florida could change the face of Florida politics.

The island’s tropical rainforest climate, she said, is changing before their eyes. Local farmers are adopting drought-tolerant crops. Some have relocated as arable land goes sour from shifting water distribution patterns and rising seas, which drown aquifers. Two years earlier the island saw one of the worst droughts in its history. It spent more than a year grinding farmland into ash, but then broke with a maddening deluge that washed away crops just as delighted farmers were finally planting them. Then came 2017 and its cache of hurricanes.

“So when Irma and Maria hit within two weeks of each other people were like ‘what the—Mother Earth is trying to kill us,'” said Avilés-Vázquez, who is also a researcher for the Center for Sustainable Development Studies at the Universidad Metropolitana in San Juan.

She claims Puerto Rico’s climate-conscious inhabitants knew the value of recycling and a low carbon footprint long before the storms, but that couldn’t stop them from being victimized.

“We’re a small population. We can carbon sink or recycle and bike more and plant all the trees we want, but that won’t change anything on the larger scale,” she said. “We’re bearing the brunt of climate change and we’re not really responsible for it.”

The U.S. stood only behind China as the planet’s chief emitter of carbon dioxide in 2015—accounting for 15 percent of total global emissions from fuel combustion. Embattled Puerto Ricans don’t get a say in the national climate debate, though, because of their commonwealth status. They can only watch as a president, for whom they could not vote, rolls back federal environmental protections while their island boils.

That changes when a Puerto Rican moves to the U.S. mainland, however. As U.S. citizens, islanders can vote as soon as they register in their new location. It’s no different than moving from Albuquerque or Vegas. Knowing this, Puerto Rico’s frustrated governor, Ricardo Rosselló, announced that he was mobilizing relocated Puerto Ricans to register to vote and use their fledgling political voice to rattle the presidential administration for its destructive decisions. Rosselló howled when Trump punctuated hurricane devastation with an untimely tax on U.S. businesses stationed on the island. Trump’s refusal to permanently lift the Jones Act, which doubles the price of island imports, also curdles relations.

Trump alienates Hispanics in general, jeopardizing his party’s dominance in a swingy state like Florida, which elected him by only 113,000 votes. Florida is facing an open gubernatorial race next year, as well as a Senate election and a series of congressional races that could upset Republican control of Congress.

The GOP is in damage control, with business affiliates at Koch Industries ingratiating themselves with P.R. refugees through generous language and civics training courses in Orlando. Anthony Suarez, president of the Puerto Rican Bar Association of Florida, said they have a long way to go.

“Trump’s not getting good political speed out of his actions in Puerto Rico, especially with that towel incident,” Suarez said, recounting unflattering footage of the president visiting storm-torn areas and derisively hurling rolls of paper towels to a crowd.

Some news sources recorded almost 300,000 new P.R. voters in Florida by January, but islanders have been steadily relocating to the mainland for years.

“We got something really big [brewing] here,” he said.

“Puerto Ricans are cognizant of the impact of climate change, but Floridians also are cognizant,” said Jackalone. “We don’t have a lot of (climate) deniers anymore.”

Hurricane Irma made an impact after knocking out power to more than 50 percent of the state. Jackalone said Floridians are also noticing the sea level rise, with saltwater intrusion in reservoirs in parts of Miami and in some parts of the Florida Keys.

It will help that Puerto Ricans are enthusiastic voters back on the island, where turnout is regularly higher than turnout for presidential elections in the 50 states; throughout the late 20th century, voter turnout for the island’s quadrennial elections was 50 percent higher than for mainland presidential contests. On the island, voting is a matter of cultural pride, with an intensity matched only by the ease of the voting process. The island has easy registration, requiring the presentation of state, federal or local government-issued ID and a utility bill proving your place of residence. Registrants receive an “Electoral Identification Card,” which is the only thing required to vote. Juan Rosario, director of Puerto Rico’s State Elections Center for Electoral Studies, said registration is possible the day before the election.

“It’s harder to vote on the mainland than in Puerto Rico,” said Culliton-Gonzalez, minutes after witnessing oral arguments before the Supreme Court regarding Ohio’s discriminatory “use it or lose it” voter purge law.

For starters, new residents will hit an insidious language barrier. More than 70 percent of Puerto Rican adults, like Castro-Pérez, have limited English proficiency. Culliton-Gonzalez argues that this should not be an issue, according to Section 4(e) of the Voting Rights Act of 1965, but still likely will be.

“They have a right to vote with Spanish language ballots, with Spanish language poll workers, and be registered to vote in Spanish, but that’s not something that’s always followed, particularly in the state of Florida,” Culliton-Gonzalez said. “Some won’t be able to understand the ballots, particularly all the ballot measures in Florida. They may understand the main races like the presidency and the vice presidency, but beyond that they just won’t understand it at all. They’ll have to guess, or not vote a complete ballot.”

Other issues facing Florida’s refugees include maddeningly long voting lines, caused by the elimination of polling areas and wonky, aging voting machines. Puerto Rican climate refugees will have it worse in places like Wisconsin, which has birth certificate requirements at registration—made more daunting by the fact that Puerto Rico’s storm-ravaged government won’t be zipping out new birth certificates at record pace anytime soon. Even if it could comply, the application fee costs money, which Culliton-Gonzalez calls a poll tax. Refugees who managed to salvage their certificates from the storm may have wasted that effort, because states with voter ID laws, including Pennsylvania , Connecticut and Wisconsin, will not accept the document if it was issued before 2010.

Florida’s less restrictive ID law may not require a birth certificate to register, but Aviles-Vazquez said Puerto Rican political participation in 2018 will be up against the inevitable distractions that come of being a climate refugee.

“A lot of refugees who are moving to the U.S. are in survival mode. If I’m moving to Florida from a bad situation I’m thinking about my family here and my family back home that still needs help. I need to get a job. I need to get childcare for my kids. There are so many things going on that they may not be thinking about politics. I mean, I could not begrudge them if they are not.”

Castro-Pérez is one of the lucky ones. Her husband nabbed employment at a local Autozone and has temporarily moved the family into his sister’s Orlando home. The kids are settling in, food is on the table, and they have electricity that still escapes about 35 percent of the population they left back on the island. She said they retain ties to their homeland and would eventually like to return, but for now there is plenty of reason to stay in Florida.

And she says she will soon be registering to vote.