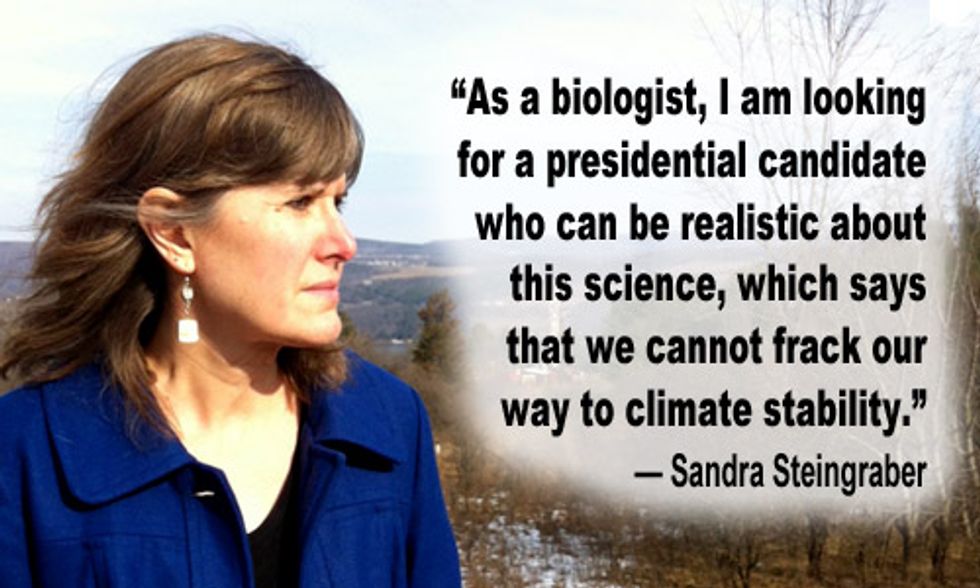 Sanders himself was not on hand—nor was he part of the billing. Nevertheless, more than 1,000 people packed the damp, chilly hall to standing room only capacity to hear from anti-fracking leaders, as well as organizers from the campaign itself, who instructed the audience members in the art of door-to-door canvassing, signed them up for tours of duty, and, when the rally ended, sent them out into the community to knock on doors, phone bank and turn out the vote.

Spirits were high. Excitement was palpable. Chants and ovations were loud and long. It was a moment when elements of the grassroots anti-fracking movement in New York State joined hands with the larger political groundswell behind the Sanders campaign.

“We must abolish the system of oppression known as climate change ... We are out of time. We have to get radical ... We are talking about keeping our planet alive. Our children are our landlords; we are renting from them."

Wright pointed out that fracking disproportionately harms people of color, especially in California where 90 percent of fracking wells are located within one mile of communities of color. A come-from-behind win for Bernie in New York, observed Wright, would serve as wind in the sails of Bernie's later primary race in California, as well as bolster anti-fracking efforts there.

Kelleigh McKenzie, a local delegate from the Kingston area who has been organizing for Sanders in the region, said that with Sanders' campaign, “a political movement has arrived in the Hudson Valley" that stands against “the suicide economy," which fracking and other forms of fossil fuel extraction enable.

The recurring themes of the day—the generational and racial inequities of climate change; the lateness of the hour that makes incremental solutions and half-measures ineffectual; the need for bold political leadership; the multiple perils that fracking poses for climate, water and public health—were made by several speakers, including tribal rights attorney and Honor the Earth campaigns director Tara Houska, 350.org founder Bill McKibben (participating via Skype) and anti-fracking activist and filmmaker Josh Fox.

I also addressed the crowd. Here is a transcript of my remarks:

Hi everybody. My name is Sandra Steingraber and I occupy the anti-fracking wing of the climate justice movement.

I bring you warm greetings from the snowy shores of Seneca Lake where an uprising of brave citizens winemakers, nurses, farmers, teachers, veterans, chefs, moms, dads, granddads and great grandmothers are peaceably standing up to a Houston-based gas company called Crestwood which seeks to turn our beloved lake shore into a massive gas station for the products of fracking.

It's a plan that threatens not only the climate but also a source of drinking water for 100,000 people. That contested lakeshore is our Greensboro lunch counter.

But I left the shores of Seneca Lake to join you on the banks of the mighty Hudson, not as a partisan of that struggle, nor as a co-founder of New Yorkers Against Fracking—which is how you may know me. Today, I am casting off those hats and speaking to you out of two even more fundamental identities—as a biologist and as a mother.

Biology and motherhood are deeply entwined for me. My own mother was also a biologist and, because I was her adopted daughter, she helped me to see that the whole living world—all flora and fauna contained therein—was my family tree.

Thus, my first memory is cracking open fossils with my mom on the front stoop of our home. That project gave me a sense of ancestry. By age six, I had straightened out all of my little friends on the question of where babies came from. By nine, I had my own microscope. With these gifts from my mother, came lessons about the interconnectivity of creation.

In turn, we animals and humans exhale carbon dioxide, which has the ability to trap the sun's heat and so keeps us warm at night, preventing the oceans from freezing over after the sun goes down. It's a perfect balance between plants and animals that allows living organisms to sustain the conditions of life that make more life possible, which is why, as environmental attorney Joseph Guth reminds us, a functioning biosphere is worth everything we have.

Now that I have kids of my own and now that I make my living as a systems ecologist, here's what I can tell you:

By trying to run our economy by shattering the bedrock of our nation to exhume oil and methane via fracking, we are destroying and poisoning the nation's drinking water sources in the aquifers deep below our feet. And because methane is a such a powerful heat-trapping gas that cannot be wholly contained in the piles of rubble left behind, we are also exacerbating climate change in the atmosphere high above our heads—at a time when we urgently need to be coming up to the rescue with renewable energy.

Fracking is not safe and can't be made safe. That's what science shows, and those findings are a direct threat to my own two children, who are 65 percent water by weight. My children's safety depends on safe sources of water. Their future depends on functioning pollinator systems to provide them food and thriving plankton stocks to make oxygen for them to breathe.

I can't do my job as a mother in a fractured America.

I can tell you what I saw in a Romanian village where I was invited to give a lecture on the public health impacts of fracking and where my 12 year old son and I were both pepper-sprayed by military police acting as a private security force for a fracking operation run by the U.S. company called Chevron.

An old woman said to me, “We waited 50 years for Americans to show up here, and you brought Chevron." It was she who explained to me the foreign policy objectives for opening eastern Europe to U.S. fracking operations.

I can tell you what I saw at the climate treaty negotiations in Paris last December. Renewable energy CEOs, and their would-be financiers, urged political leaders to give them a clear, strong signal that indicates the energy revolution has begun. At the same time, the world's climate scientists warned those same political leaders that we're out of time and that signal must come now.

As a biologist, I am looking for a presidential candidate who can be realistic about this science, which says that we cannot frack our way to climate stability.

As a mother, I am looking for a Presidential candidate who can recognize an emergency when they see one, who knows, as the poet Audre Lorde reminds us that “the master's tools will never dismantle the master's house."

As a citizen, I am looking for a presidential candidate who knows a government tasked with ensuring security and domestic tranquility, cannot do so when seawater is sloshing through New York's subway tunnels or when vineyards of wine grapes—the economic goose that lays the golden egg in my part of New York—have to compete with flare stacks compressor stations and pipelines. Or when we keep the lights on by shoveling fossil fuels into ovens and lighting them on fire and so threaten to tear up what Abraham Lincoln called our nation's “salubrity of climate" that makes agriculture possible.

In 1979, my mother and I became became co-cancer patients together. Her advice to me was, “Don't let them bury you before you are dead." She was dealt a very tough prognosis at age 46, and yet she went on to defy all prediction, outlived three oncologists, and is now 85 years old.

So, I offer my own mother's advice to the Sanders' campaign and to all of you.

We are not here to simply express our hope for a strong, clear signal on renewable energy from the executive office. We are here to make it so and change providence itself. That's the spirit that allowed New Yorkers, against all prediction, to evict the frackers from our state and ban fracking now and forevermore.

Against all prediction, fellow New Yorkers, let's help elect the nation's first keep-it-in-the-ground president, willing to defend our bedrock, our water and our climate from those who would thrown our own children under the bus to line their fossilized pockets.

Let's make it so.

Surgeon General's Warning: We Must Act on Climate