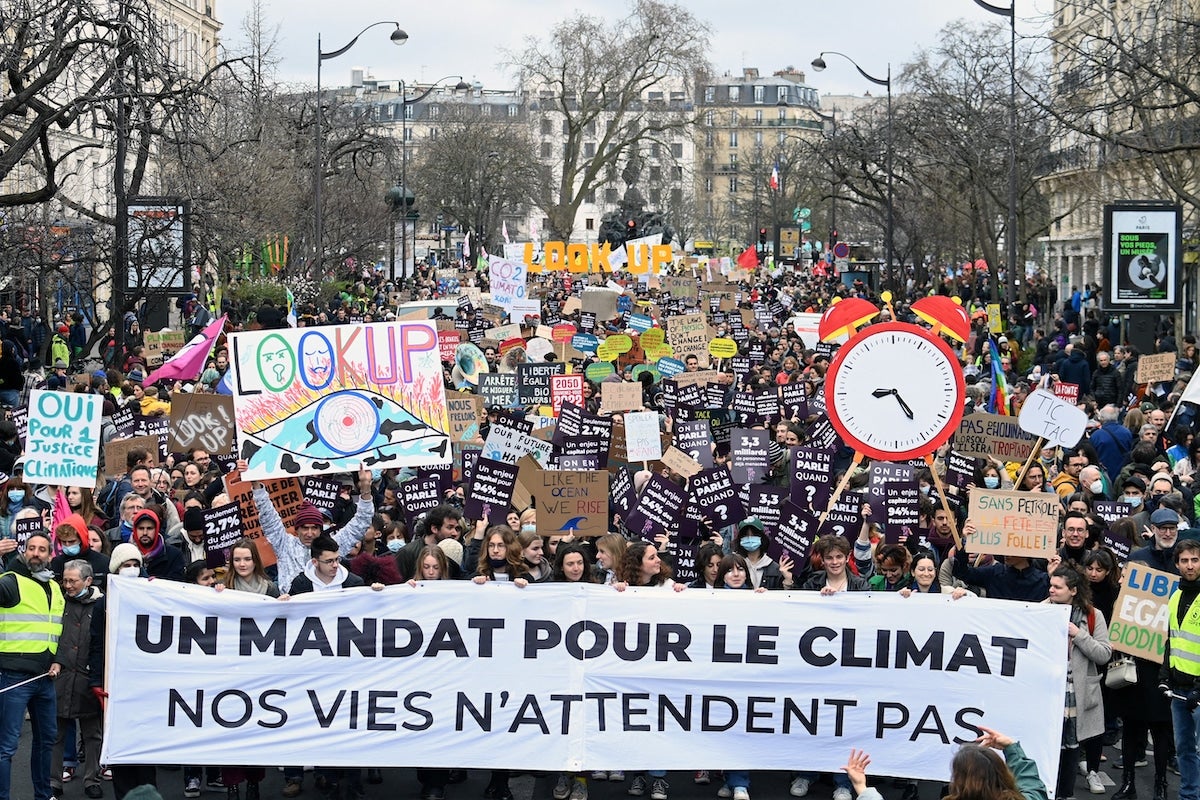 Protesters in Paris, France call on presidential candidates to confront the climate emergency, during a "Look Up" march on March 12, 2022. ALAIN JOCARD / AFP via Getty Images

The 2021 film Don’t Look Up is an account of astronomers trying to warn Earth’s population about a comet barreling toward the planet, a threat they cannot get the U.S. president or members of the media to take seriously. As France’s presidential election approaches next month, tens of thousands of protestors in the country called for action concerning another global menace: the climate crisis.

The nonprofit Alternatiba — which means “Alternative” in the Basque language — nicknamed the climate protests “Look Up Day,” reported Variety.

“[T]he success of the film ‘Don’t Look Up,’ which draws an obvious parallel with the climate crisis, has allowed for crucial issues to make their way into the public debate,” Alternatiba wrote on its website, as Variety reported.

According to a survey conducted by NGOs concerned with climate justice, from February 28 to March 6 just 1.5 percent of media coverage of France’s election campaign dealt with the climate crisis, reported The Guardian.

“In France in 2022, the greatest threat humanity has ever known is being ignored in the middle of an election period, while our future is at stake,” said the organizers of the protests, as The Connexion reported.

In Paris, 32,000 protesters took to the streets to advocate for climate justice, with 80,000 participating countrywide, according to the protests’ organizers, as The Guardian reported. The interior ministry had different figures, saying only about 11,000 protested in Paris, with 40,000 turning out throughout the country.

Adam McKay, the director of Don’t Look Up, learned that the film was going to be the theme of the climate march in February, and, when he saw photos of the demonstrations, he posted “reports are 80 thousand marched in Paris alone. How do you say ‘holy shit!’ in French?” on social media, as reported by Variety.

Lydie Lampin Bernand, a protester in Lille, a city in the north of France, said the climate crisis is “worse than critical,” as The Guardian reported. “I’m only 34 years old, and even I’ve seen the planet slapped in the face with a shovel.”

The climate protests’ organizers said people should not let the inaction of their governments stop them from taking steps to tackle the climate crisis.

“Let us not allow our rights and our future to remain hostage to those who are leading us to disaster. With their irresponsible passivity, governments tell us that there is nothing more we can do. This is not true,” said the protest organizers, as The Connexion reported.