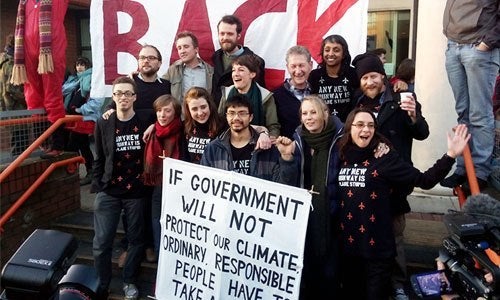 Today 13 individuals who blockaded a runway to protest against expanding Heathrow airport were expected to be sent to prison but ended up receiving six-week suspended sentences instead. They had packed suitcases and set up their “out of office” email messages anticipating to become the first climate activists in the UK to receive a prison sentence.

It is symptomatic of the overwhelming influence of corporate interests over our democracies to threaten peaceful protestors who take action for the greater good with prison sentences, while tolerating the conduct of those that drive us into climate chaos for private gain. Yet, as the climate crisis unfolds, more and more people are preparing for climate disobedience. The promises of the Paris climate agreement require an immediate and massive shift away from burning fossil fuels. There is however a major gap between the words of politicians and their plans for action. It’s now up to ordinary citizens to take action to keep the coal, oil and gas that is cooking our climate in the ground. 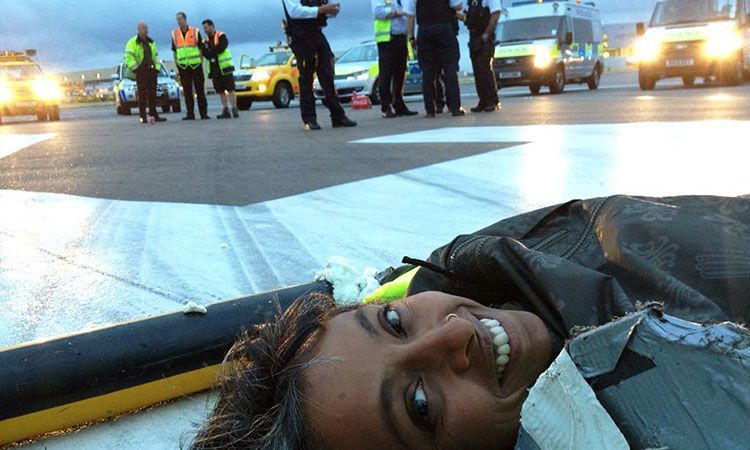 In the case of the Heathrow 13, this is what happened: In July last year, a commission tasked by the UK government recommended expanding the Heathrow airport. Two weeks later, 13 individuals from the direct action network Plane Stupid peacefully blockaded a runway at Heathrow airport in protest at the expanding aviation industry, which causes deaths from air pollution and climate change. Their occupation lasted six hours and delayed or cancelled dozens of flights.

The “Heathrow 13” include a 68-year-old atmospheric physicist and 350.org UK divestment campaigner Danielle Paffard. In court they argued that they feel a moral responsibility to take action as ordinary citizens where democratic, legislative and political processes fail to address the threat the aviation industry poses to the climate and people’s health.

Thirty-two-year-old Melanie Strickland who works for a health charity in London said:

“When the political system is so fundamentally flawed that it is unresponsive to an issue of colossal international importance, such as climate change, then every citizen has a responsibility to act. There is a basic human, moral and social duty to take action to prevent this disaster and to wake people up.”

Aviation currently accounts for about 2-5 percent of global emissions but the industry’s rapid expansion could see that number jump to 22 percent by 2050, according to a recent study by the European Parliament. It is one of the fastest growing sources of emissions, yet aviation remains largely exempt from emission reduction requirements and enjoys tax breaks that keep air travel costs artificially low.

A paragraph on emissions from aviation and shipping in a draft version of the Paris text was taken out of the final agreement and new rules by the UN’s International Civil Aviation Organization are much too weak to have a meaningful impact. Besides fueling climate change, a third runway at Heathrow will cause 150 premature deaths a year by 2030, according to a MIT estimate. 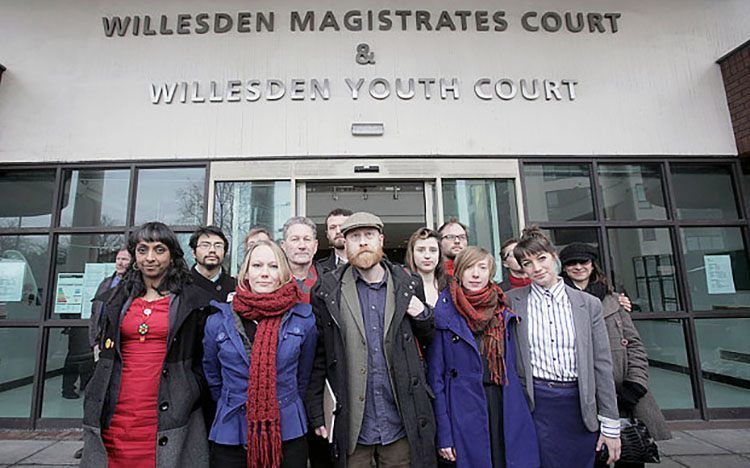 Even though the judge recognized that the Heathrow 13 were “principled and passionate people” and that Heathrow is in breach of EU emission regulations, she found them guilty of “aggravated trespass” and warned them to expect immediate jail sentences when they return to court.