These Corporations Have the Biggest Influence on Climate Policy 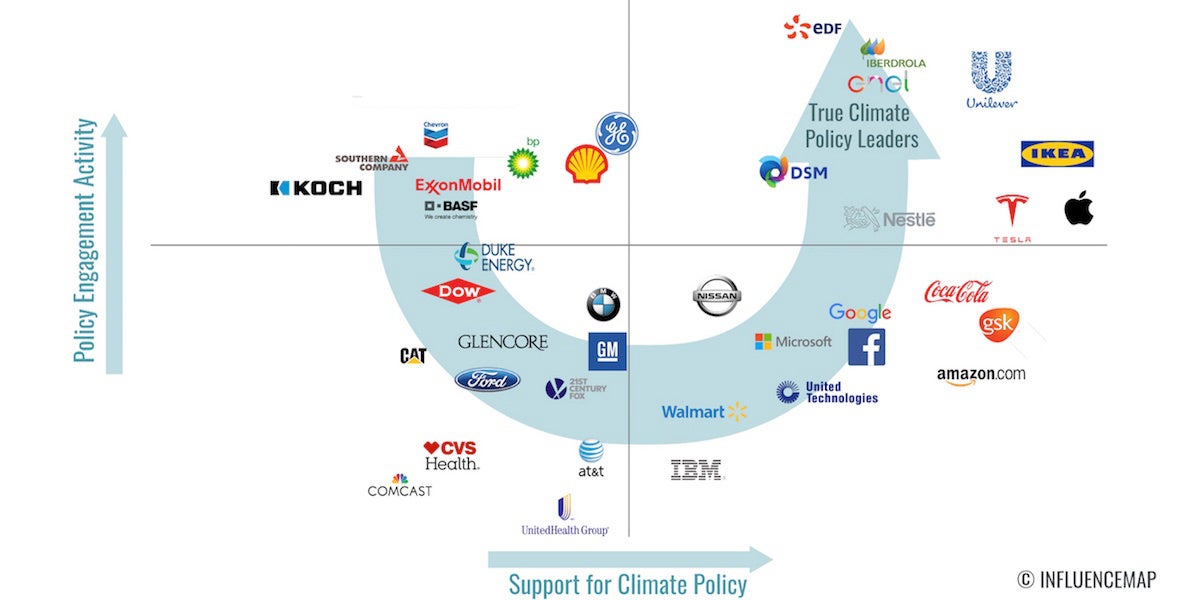 For better or worse, corporations have a major influence on climate change policy. Just look at Koch Industries, a multinational conglomerate owned by conservative billionaires Charles and David Koch that has contributed hundreds of millions to federal candidates and lobbying over the last 25 years.

The “Corporate Carbon Policy Footprint,” a new analysis from U.K. nonprofit InfluenceMap, now ranks Koch Industries as the company with the strongest opposition to the Paris climate agreement and most intensely lobbies against policies in line with the landmark global accord.

The InfluenceMap scoring system does not measure a company’s actual greenhouse gas emissions. Rather, it measures “the extent to which a corporation is supporting or obstructing the climate policy process.”

For the InfluenceMap report, researchers analyzed more than “30,000 pieces of evidence” on 250 global companies and 50 major trade associations on their lobbying records, advertising, public relations and sponsored research, according to Bloomberg.

The research group gave the Wichita-based company an “F” grade for its anti-climate actions:

“Koch Industries appears to be actively opposing almost all areas of climate legislation. In 2014 in the US, they were reportedly active in their opposition to a carbon tax, funding politicians and campaigns to oppose the tax. Similarly, in 2014 they appear to have opposed the U.S. EPA Clean Power Plan in consultation and through direct engagement with policy makers, and boasted about their success in blocking the US Cap and Trade Scheme in 2010. Additionally, they appear to be opposing measures to transition to a low carbon economy, advocating against renewable energy subsidies, and funding groups that have opposed energy efficiency standards, the repeal of fossil fuel subsidies and the need for action on climate change. They seem to be exceptionally active in opposing renewable energy standards across the U.S. Both the organization and its CEO, Charles Koch, appear to have questioned climate change science, and have reportedly funded climate denial. Senior executives are active in both the National Association of Manufacturers and ALEC, which also appear to be resisting climate change related regulations and policies.”

On the opposite end of the spectrum, Silicon Valley tech giant Apple was ranked highest on the list and has an A+ for its support of climate change action and its positive engagement with a number of climate change policy areas.

Here are the report’s key findings:

“The data shows the climate policy agenda, in terms of corporate influencing, is being driven by a small number of massive global corporations,” Dylan Tanner, InfluenceMap executive director, said in a statement. “It also shows a group of powerful of companies in the tech, consumer goods and utilities sectors increasingly pushing for policy to implement the Paris Agreement.”