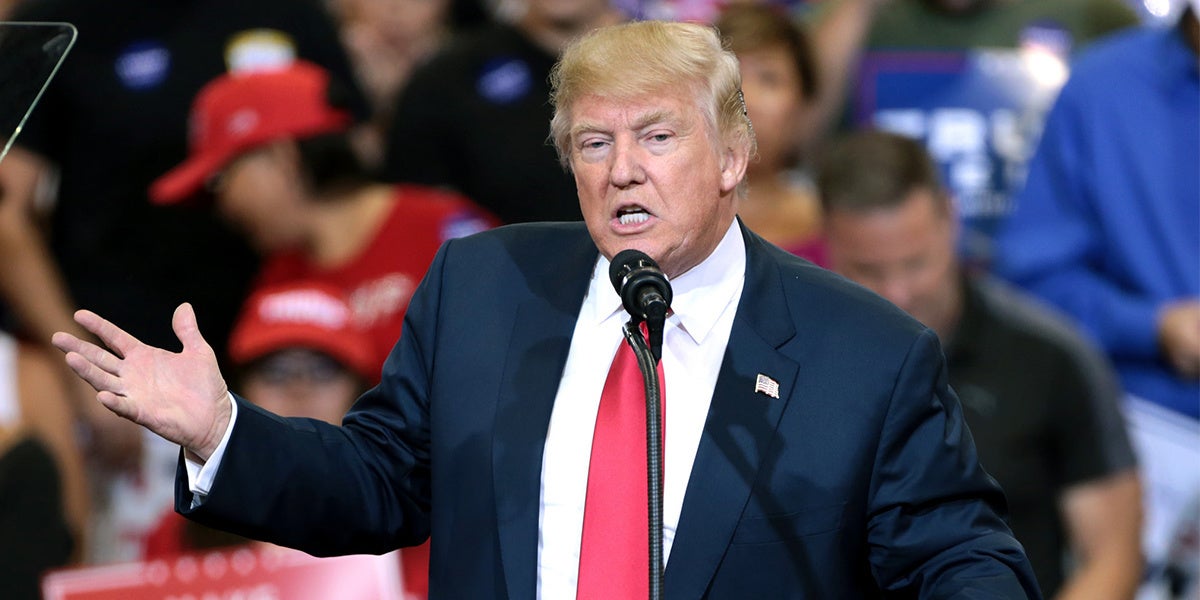 All press is good press—except when it isn’t.

For those who are happy about President Trump‘s attacks on climate science and policy, this will come as bad news. By shining a spotlight on the issue, Trump drove media coverage of climate change last year.

New analysis from Media Matters for America finds that, following a year of lagging coverage of climate change, 2017 saw network news programs scramble to report on Trump’s full-scale assault on federal climate policy. The spike in coverage coincided with an increase in concern about climate change—Americans are now more worried than ever about the carbon crisis.

What’s more, the heightened awareness comes in spite of the fact that broadcasters fell short in several key areas. “Even though corporate broadcast news coverage of climate change increased between 2016 and 2017, the quality of coverage remained poor across the board, primarily because the networks centered their climate coverage around Donald Trump while largely neglecting other important climate stories,” said Lisa Hymas, director of climate and energy programs at Media Matters for America.

Here are the key takeaways from the report.

The nation’s broadcasters didn’t spend a lot of time on climate change last year, but when they did, it was almost always in response to Trump. Segments that dealt with his policies or featured statements from members of his administration accounted for 79 percent of the total time given over to climate change. Roughly half of all climate segments centered on his decision to pull out of the Paris agreement. 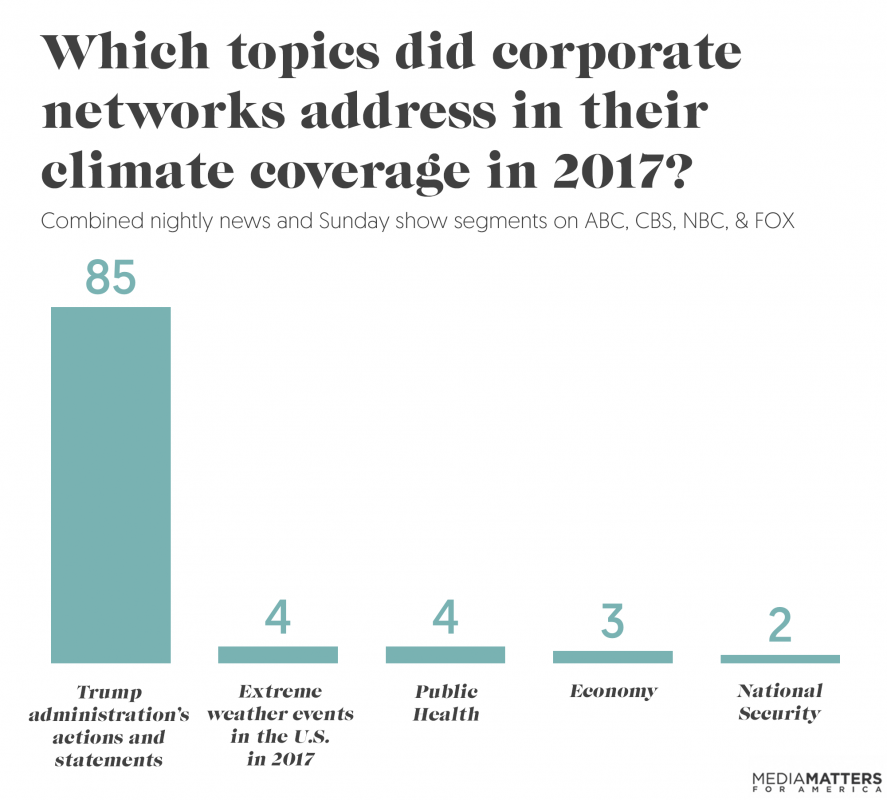 “The networks paid disproportionate attention to the political spectacle Trump made of rejecting the Paris climate agreement, while they largely overlooked crucial stories like the ongoing rollback of the Clean Power Plan and the role of climate change in a year of record-setting weather disasters,” Hymas said.

Broadcasters gave almost no time, for example, to the impact of climate change on public health, national security, infrastructure or the economy—not to mention numerous protests against Trump’s climate policies. For example, broadcasters scarcely mentioned the People’s Climate March, which drew 200,000 people to the National Mall in April.

In a year of record storms, heat waves and wildfires, networks failed to explain how climate change is fueling extreme weather.

2017 was a marquee year for climate change, as rising temperatures exacerbated wildfires in California, heatwaves in the Southwest, and three devastating hurricanes— Harvey, Irma and Maria. Last year’s weather disasters were the costliest in U.S. history. And yet, broadcasters devoted just four segments in total to the influence of climate change on extreme weather, including just two about last year’s hurricanes. 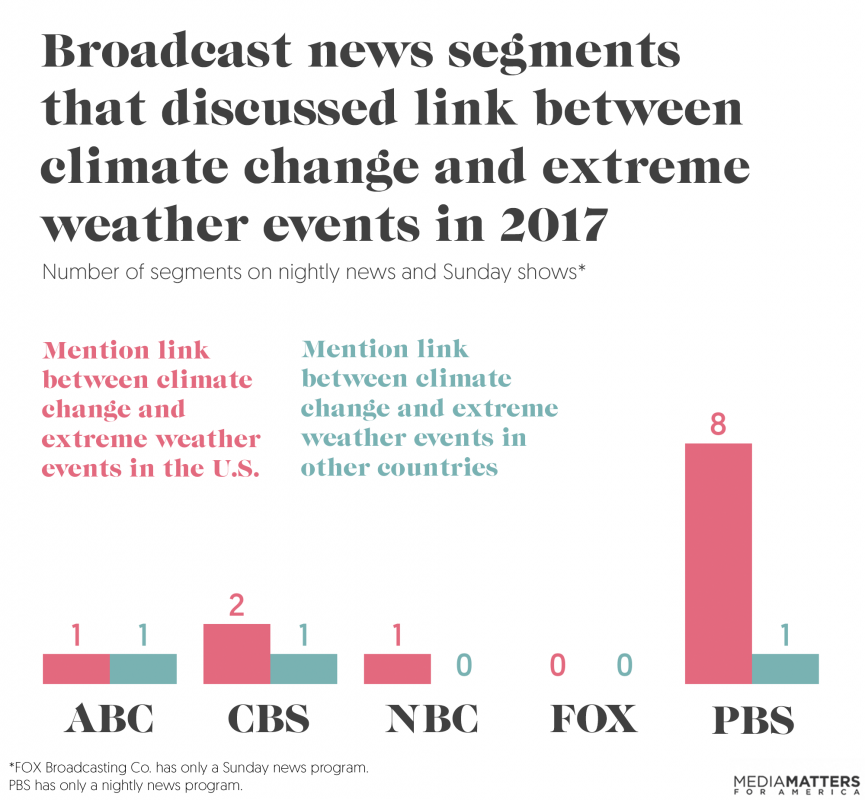 This is not to say the news outlets failed to cover natural disasters, just that they neglected to examine the influence of climate change. To be fair, it can take scientists weeks, months or longer to sift through the data to find the human fingerprint on a particular storm or wildfire. But, amid a record-setting hurricane, for example, broadcasters can invite climate scientists to explain how climate change is contributing to extreme weather more generally. Per usual, PBS far outperformed its peers in this regard, while CBS came in at a distant second.

Broadcasters gave a considerable amount of time to climate deniers in 2017, much of it unavoidable. The president of the U.S. has said human-caused climate change is a fiction, and reporters have to report on what he says. That doesn’t mean, however, that they must do so uncritically.

Reporters have a responsibility to put the president’s remarks in context, explaining that scientists overwhelmingly agree that humans are causing climate change. Yet, in 37 percent of segments noting Trump has called climate change a “hoax,” broadcasters did not challenge his claim. TV news anchors were similarly lax in pushing back on the fallacious claims of administration officials. The report highlighted this exchange between U.S. Environmental Protection Agency (EPA) chief Scott Pruitt and Chuck Todd, host of Meet the Press: 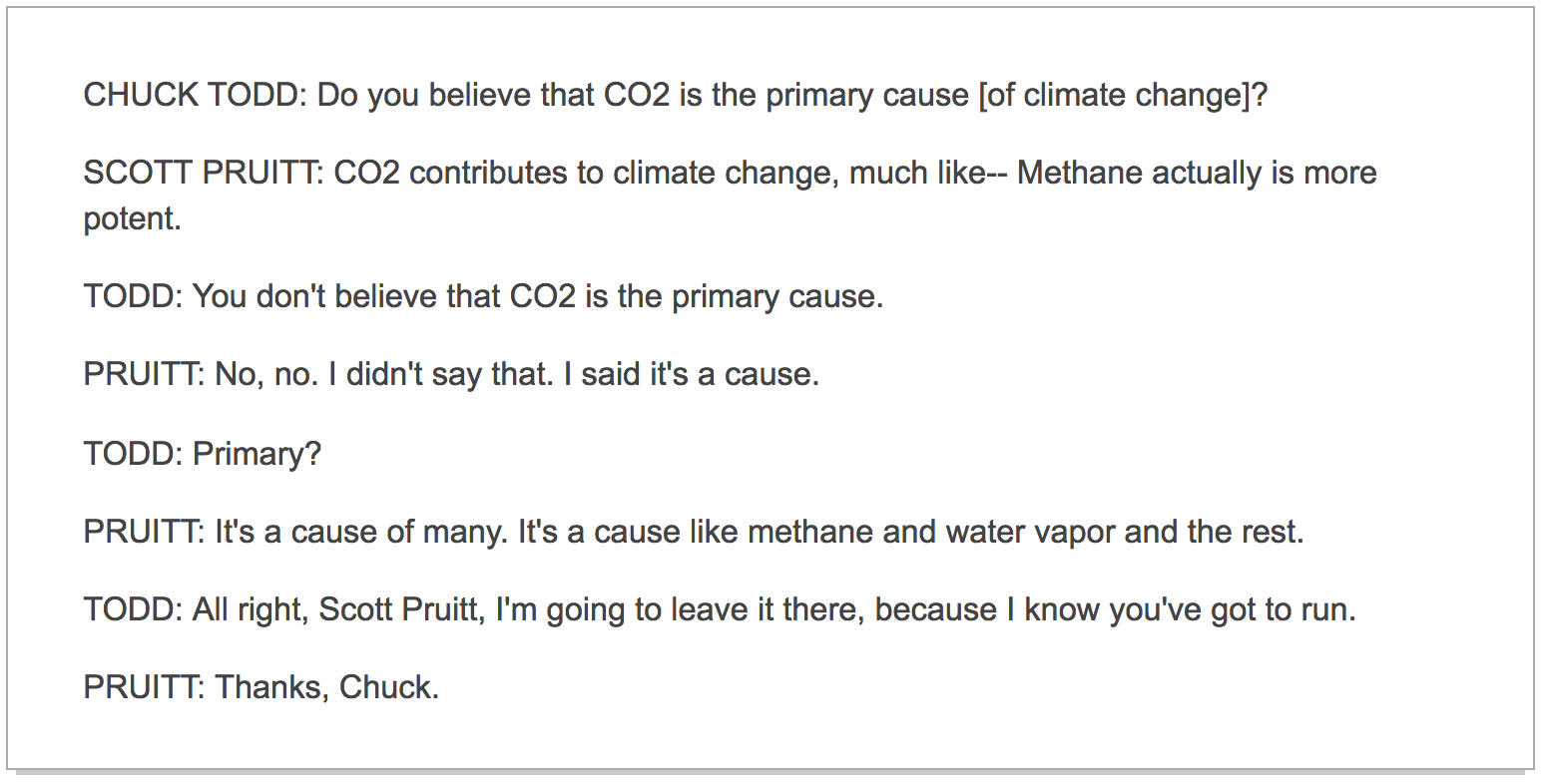 More generally, journalists charged with providing an objective account of the day’s news often settle for a he-said-she-said roundup of political elites. The consequence is that reports from scientists or policymakers about the severity of climate change are often paired with statements from high-profile climate deniers.

Americans are more worried than ever about climate change. Trump may have something to do with it.

There’s evidence the public uses the volume of coverage of a particular issue to gauge the importance of that issue. And study after study after study has found that elites drive what news outlets cover. A 2016 paper, for example, found that “opinion on climate change is directly influenced by media coverage,” and that “the most important driver of media remains elite cues from politicians and movement actors.”

In this way, climate change mirrors several other issues. When this particular president takes a stance—that the press can’t be trusted, or that immigrants are a threat—large numbers of Americans run in the other direction. Just as the public has grown more concerned about the climate, it has also become more trusting of the press and more supportive of immigration.

The retreat from Trump may reflect the president’s habit of playing to his base while antagonizing Democrats and independents. Persuasion is a lost art in this White House. So far, the administration’s repeated attacks on science and policy have pushed broadcasters to cover an issue that, until recently, they were happy to ignore.

Going forward, Hymas argued, TV reporters should take their cues not just from political elites, but from the scientific community, which has made clear that climate change is an existential threat. “As the climate crisis intensifies,
the broadcast networks must report on the real-world effects of climate change and climate policies rather than treating the issue as Trump’s political football,” she said.