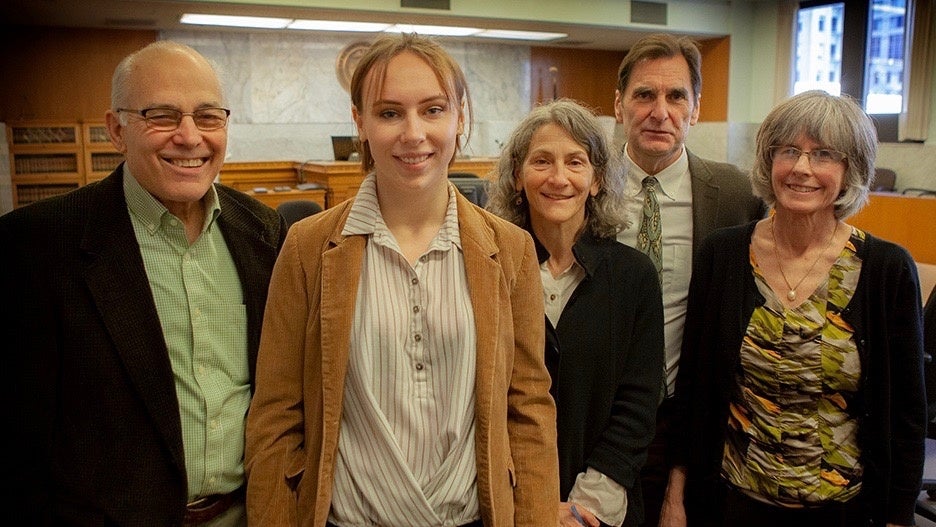 The so-called "Zenith Five" in court. "Zenith Energy Corporation, and the city's inability to shut it down, is the poster child for what is wrong with our system," defendant Margaret Butler said in a statement Thursday. @RickRappaport2020

Environmentalists celebrated a landmark victory in the “fight for a habitable future” after a Portland, Oregon jury on Thursday refused to convict five Extinction Rebellion activists — including valve turner Ken Ward — who presented the climate necessity defense at their trial for blockading a train track used by Zenith Energy to transport crude oil.

The activists emphasized that the win was only partial because the criminal trespassing case ended in a mistrial rather than a full acquittal. Just one of six jurors voted to convict the activists while the five others voted to acquit.

But Ward said the jury’s refusal to convict even when presented with video evidence of the trespassing “is a vindication of our call for climate activists to use a climate necessity defense,” which states that it is at times justified to break the law to combat the planetary crisis.

“When citizens are told the truth about the climate crisis—which is the first of Extinction Rebellion’s demands—they take appropriate and responsible action, as our jury did, and we thank them,” said Ward.

The five activists were arrested last April for building a garden on the tracks of Houston-based Zenith Energy’s railroad terminal in Portland to protest expansion of the fossil fuel infrastructure.

“The activists had been protesting the expansion of the oil terminal at a time when they say we should be dismantling fossil fuel infrastructure, not creating more,” the local radio station KOPB-FM reported at the time. “A few small mounds of soil extend onto the rail line—not much, but apparently enough to make it unusable. Activists also sat on the tracks.”

There’s a group of, at this point, 25 or so people on NW Front, at a “Victory Garden” protest blocking part of railroad tracks used by, among others, Zenith Energy. pic.twitter.com/8ItOclxUYj

“Zenith Energy Corporation, and the city’s inability to shut it down, is the poster child for what is wrong with our system,” defendant Margaret Butler said in a statement Thursday. “We need to take note of the lessons learned by the labor movement—mass civil disobedience works. The climate crisis is a workers issue, we need to unite to shut down business as usual. Right now.”

Lauren Regan, lead attorney for the group of activists, said it is now up to the Multnomah County district attorney’s office to decide whether to re-prosecute the climate campaigners.

“The jury’s inability to convict the activists,” said Regan, “reflects the prevailing community consciousness which is unlikely to punish climate defenders for acts of nonviolent resistance.”