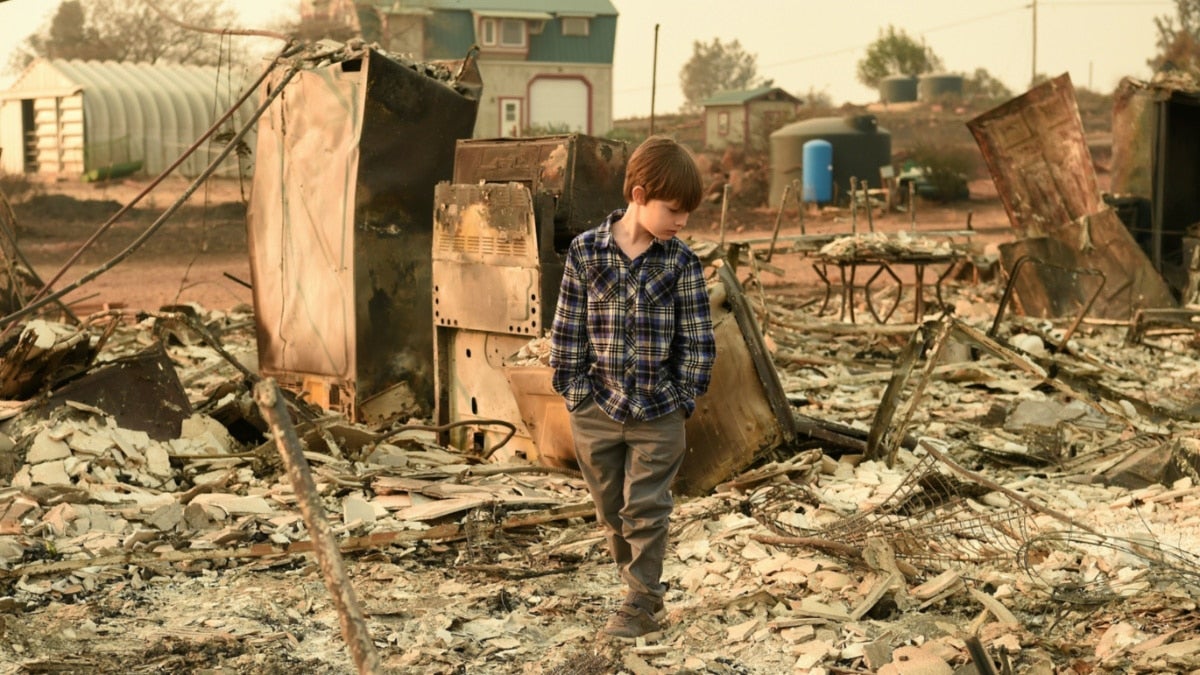 Jacob Saylors, 11, walks through the burned remains of his home in Paradise, California on November 18, 2018. The family lost a home in the same spot to a fire 10 years prior. Josh Edelson / AFP / Getty Images

Potentially millions of people in the U.S. will be displaced as the climate crisis makes certain regions increasingly uninhabitable, prompting new migrations that will reshape the country, a new report shows.

The story published Tuesday is the second installment in a series on global climate migration that stems from a collaboration between ProPublica and the New York Times, with support from the Pulitzer Center.

While the first article in the series focused on the movement of climate refugees across international borders, the latest story focuses on how climate migration within the U.S. will reshape the country.

As report author Abrahm Lustgarten explains, “In much of the developing world, vulnerable people will attempt to flee the emerging perils of global warming, seeking cooler temperatures, more fresh water and safety.”

But here in the U.S., many people have for years “avoided confronting these changes in their own backyards,” he writes.

“The decisions we make about where to live are distorted not just by politics that play down climate risks, but also by expensive subsidies and incentives aimed at defying nature,” Lustgarten adds in the report. “People have largely gravitated toward environmental danger, building along coastlines from New Jersey to Florida and settling across the cloudless deserts of the Southwest.”

In light of a summer in which millions of people have endured the devastating combined effects of a pandemic, wildfires, hurricanes, and heatwaves, the journalist wonders: “Might Americans finally be waking up to how climate is about to transform their lives? And if so—if a great domestic relocation might be in the offing—was it possible to project where we might go?”

New: Wildfires rage in the West. Hurricanes batter the East. Droughts and floods wreak damage throughout the nation. Life has become increasingly untenable in the hardest-hit areas, but if the people there move, where will everyone go? https://t.co/o2UWPsgbRX

America's climate crisis is here. And it will change how — and where — people live. Supported by @pulitzercenter, @NYTmag and @ProPublica mapped out how climate change will displace millions of Americans.

Read part two of our series on climate migration: https://t.co/yfC5eh5HZP

Lustgarten argues that the U.S., where 162 million people—nearly one in two—will “most likely experience a decline in the quality of their environment” in the coming years, is “a nation on the cusp of a great transformation.”

“The changes could be particularly severe” for 93 million Americans, and “if carbon emissions rise at extreme levels, at least four million Americans could find themselves living at the fringe, in places decidedly outside the ideal niche for human life,” according to the analysis.

The story is accompanied by a set of maps depicting likely shifts in the niche of human habitability, and the scenarios “suggest massive upheavals in where Americans currently live and grow food.”

Several factors are driving changes in the suitability of different environments, researchers note. These include extreme heat and humidity—the collision of which will create what scientists call “wet bulb” temperatures that will “disrupt the norms of daily existence”—as well as larger and more frequent wildfires, rising sea levels, declining crop yields, and economic damages related to higher energy costs and lower labor productivity.

According to the analysis, the greatest climate risk exists in counties throughout the Southeast and the Southwest where the perils are likely to intermingle and generate “compounding calamities.”

“The cost of resisting the new climate reality is mounting,” the report states. Public officials in Florida “have already acknowledged that defending some roadways against the sea will be unaffordable,” explains Lustgarten. Furthermore, “the nation’s federal flood-insurance program is for the first time requiring that some of its payouts be used to retreat from climate threats across the country.”

If “it will soon prove too expensive to maintain the status quo”—as Lustgarten argues it will—then what might we expect?

The author paints a grim picture of the possible consequences of mass relocations between now and 2070, arguing that such a population shift is:

likely to increase poverty and widen the gulf between the rich and the poor. It will accelerate rapid, perhaps chaotic, urbanization of cities ill-equipped for the burden, testing their capacity to provide basic services and amplifying existing inequities. It will eat away at prosperity, dealing repeated economic blows to coastal, rural and Southern regions, which could in turn push entire communities to the brink of collapse.

Mobility itself, global migration experts point out, is often a reflection of relative wealth, and as some move, many others will be left behind. Those who stay risk becoming trapped as the land and the society around them ceases to offer any more support.

While a growing number of citizens consider climate change a top political priority, Lustgarten argues that “policymakers, having left America unprepared for what’s next, now face brutal choices about which communities to save—often at exorbitant costs—and which to sacrifice.”

Lustgarten devotes considerable attention to what he describes as the negative effects of the country’s property insurance system, which has distorted perceptions of risk and incentivized real estate development in locations vulnerable to disasters. The experts he talked to anticipate shocks to the financial system and the upending of “entire communities” once “all the structural disincentives that had built Americans’ irrational response” to the threats posed by climate change begin “reaching their logical endpoint.”

“Until now,” the report notes, “market mechanisms had essentially socialized the consequences of high-risk development. But as the costs rise—and the insurers quit, and the bankers divest, and the farm subsidies prove too wasteful, and so on—the full weight of responsibility will fall on individual people.”

“And that’s when the real migration might begin,” says Lustgarten.

Past experiences with socio-environmental disasters in the U.S. raise concerns about the welfare of people who are displaced as well as those who are left behind. When the Dust Bowl “propelled an exodus of some 2.5 million people” from Oklahoma, Texas, Arkansas, and Missouri, “they were funneled into squalid shanty towns” in California, the author writes.

Experts told Lustgarten that similar problems are likely to arise in the 21st century, as hundreds of thousands of climate refugees move to cities already struggling with poverty, inequality, and “long-neglected” infrastructural systems “suddenly pressed to expand under increasingly adverse conditions.”

In the 1930s, “Colorado tried to seal its border from the climate refugees,” the report notes. And “the places migrants left behind never fully recovered.”

Barring a reorientation of economic priorities and resources through far-reaching legislation like the Green New Deal, Lustgarten suggests that the decisions made by policymakers “will almost inevitably make the nation more divided, with those worst off relegated to a nightmare future in which they are left to fend for themselves.”