Can Fragile Cities Cope With an Influx of Climate Migrants? 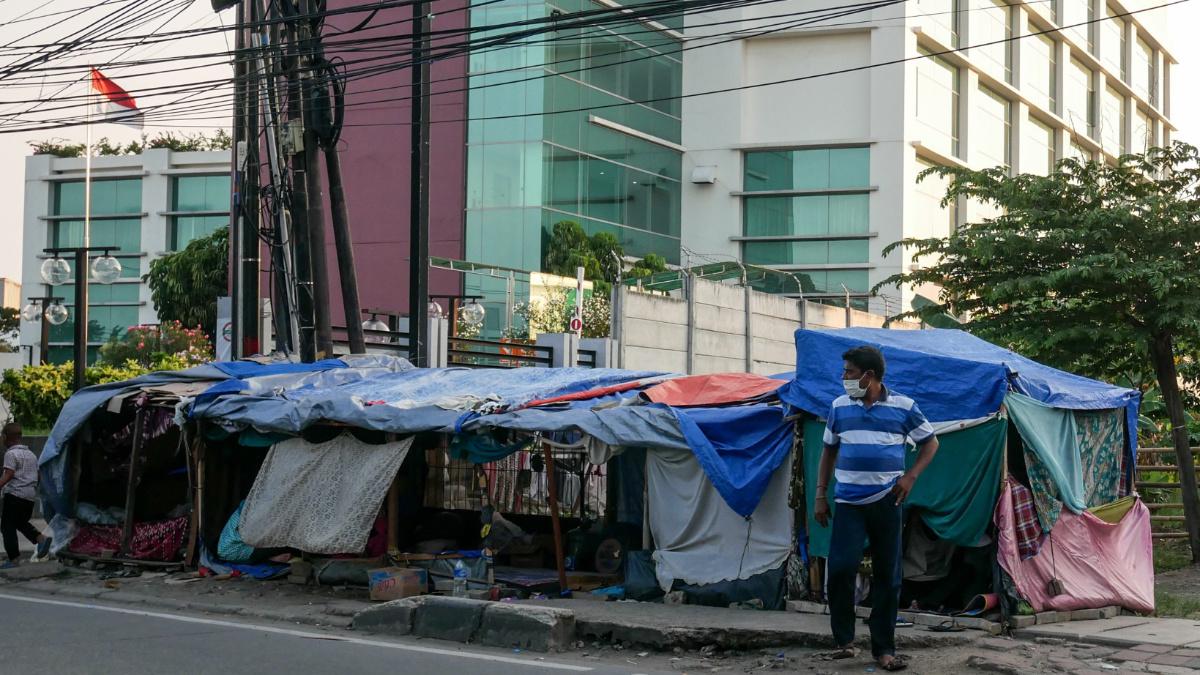 When the rains never arrived in the East African nation of Somalia in 2016, nor in 2017, hundreds of thousands of rural residents were forced to abandon their lands and livelihoods due to one of the most severe droughts in decades. Then, in 2019, from September to December, heavy rains led to severe flooding there, displacing hundreds of thousands of people from their homes in rural areas and towns in the districts of Belet Weyne, Baardheere and Berdale.

These climate migrants traversed barren and dusty landscapes, or traveled through torrential rains, in search of food and shelter. Many ended up in refugee camps in urban areas such as Badbaado, a sea of makeshift tents on the outskirts of Mogadishu that is now home to tens of thousands of internally displaced persons.

The challenges they face are profound, says Ben Mbaura, national emergency response and disaster risk reduction coordinator at the International Organization for Migration (IOM), including inter clan conflict, poor sanitation, limited education and insufficient access to food. On top of that, many “do not have the necessary skills to match labor market needs, which also results in high levels of unemployment and exclusion,” Mbaura notes.

The response to internal displacement like this has long been to provide emergency or short-term assistance. In recent years, however, with so many internally displaced persons living in protracted displacement, humanitarian organizations have increasingly recognized the need to empower them to move toward greater self-reliance. As a result, in 2016 the U.N. and the government of Somalia created the Durable Solutions Initiative (DSI) as a way to introduce long-term solutions for internally displaced persons in Somalia. The DSI gives these people a voice in decision-making processes that shape their future — and offers a model for other cities that are, or soon will be, in similar circumstances.

Every year, millions of people around the world are forced to abandon their lands, livelihoods and communities due to the effects of climate change. And the rate of climate-induced migration is increasing — with most taking place in the form of rural-urban migration within countries.

According to a recent World Bank report, “internal climate migrants” could number more than 143 million by 2050, mainly in sub-Saharan Africa, Latin America and South Asia. If the past is any indication, most will be forced from their homes by extreme weather events. Others will move from rural areas to cities due to slow-onset climate-related events, such as desertification.

Pablo Escribano, a specialist on migration and climate change in Latin America for the IOM, says this migration will create “urban hot spots” where displaced persons converge in search of shelter, food and jobs.

Climate migrants who arrive in cities are likely to move to informal settlements, and many of these hot spots will occur in rapidly expanding cities in low- and middle-income countries with weak governance and limited capacities to provide social services and infrastructure.

“In Asia, recent estimates of the increase in sea-level rise have strong implications for cities like Jakarta, Bangkok and Dhaka,” Escribano says.

In Latin America, he says, Rio de Janeiro, Lima, La Paz and Mexico City will experience migration pressure from sea-level rise, melting glaciers and other climate-change effects. “Fast-growing cities in Africa, such as Lagos, Luanda and Kinshasa are also considered to be city hot spots,” he adds.

Urban development expert Robert Muggah has dubbed these urban settings as “fragile cities.” As the co-founder and research and innovation director of the think tank Igarapé Institute in Brazil, Muggah developed 11 indicators that determine urban fragility, including crime, inequality, lack of access to services and climate change threats.

“As cities expand, many municipal governments are overburdened. They are not able to keep up with increasing demand for basic services, like housing, jobs, electricity and transport,” he says. “The climate crisis is an additional challenge on top of this. Flooding, heat waves, water shortages and more powerful storms tend to affect new migrants and already vulnerable populations most severely.”

The goal of the DSI is to strengthen the ability of government at all levels — local, state and federal — to help internally displaced persons integrate into society. It has mobilized funding from donors such as the World Bank, U.N. agencies and the Peacebuilding Fund (the U.N.’s financial resource for supporting peace in areas experiencing or at risk of conflict) to support initiatives that allow internally displaced persons to present their ideas for community infrastructure projects along with strategies to become self-reliant.

Teresa Del Ministro, the DSI coordinator for Somalia, says the DSI is a response to a growing global awareness of the limitations of traditional humanitarian approaches to deal effectively with internally displaced persons. “With that trend increasing worldwide, it appeared that multi-stakeholder partnerships are needed at all levels,” she says.

The DSI is considered particularly innovative because it lets internally displaced persons articulate the kinds of solutions they need to move toward self-reliance.

“A participatory, locally owned approach is one of the programming principles for the DSI,” says Isabelle Peter, the DSI’s coordination officer.

One example is the Midnimo I project supported by the Peacebuilding Fund with the IOM and UN-Habitat as partners.

With support from Midnimo I (“midnomo” means “unity” in Somali), climate migrants and other displaced persons in southern and central Somalia met with representatives of their host communities, along with city and national government officials, to develop creative solutions to the many challenges they face. Among other things, the initiative sought to help communities define and drive their own recovery — most prominently through community action plans (CAPs), documents that lay out local priorities for community-driven recovery.

As part of Midnimo I, the IOM trained Somali government representatives to engage displaced persons in visioning exercises to help them articulate their short-term needs and present ideas on strategies to move toward greater self-reliance.

Ali Hussein camp on the outskirts of Burao, Somaliland, is home to numerous families displaced by conflict and drought. Photo courtesy of Oxfam East Africa from Wikimedia, licensed under CC BY 2.0

Midnimo I was implemented in the cities of Kismayo and Baidoa, home to more than 450,000 internally displaced persons.

“Together they would come up with priorities for infrastructure investments or other types of investments. If a project didn’t have funding for these priorities, the government would convene other actors and ask for their support,” says Del Ministro.

According to an evaluation report by the IOM, the Midnimo I project created short-term employment opportunities, led to the construction of community infrastructure projects and contributed to the establishment of a land commission and to improved relations between authorities and displaced communities. Nearly 350,000 people directly benefited from the Midnimo I project as a result of constructing or upgrading community-prioritized schools, hospitals, water sources, police stations, prisons, airports and more, according to the IOM’s Mbaura.

The DSI in Ethiopia

The DSI also has been implemented in Ethiopia, where a drought that began in 2015 left millions dependent upon emergency food aid. The government of Ethiopia, with support from U.N. agencies, governments, donor agencies and non-governmental organizations, launched its own DSI in December 2019. As in Somalia, the focus is on long-term self-reliance.

“The scale of the displacement surprised many in the international community, and there was recognition that collectively we needed to support Ethiopia,” says Hélène Harroff Atrafi, the DSI coordinator in the U.N. Resident Coordinator’s Office. “In doing so, we looked at international good practices, including in neighboring Somalia.”

At this point, the governance structure for the DSI is being established with the government of Ethiopia in the lead. “We have agreed on the vision forward, we have brought together all of the partners who want to work together. Now the operational rollout must begin,” says Atrafi.

In the Somali region, one of 10 regions in of Ethiopia, the DSI is now at the stage of detailing the options that internally displaced families have: urban and rural relocation, return to the location of origin, and potential integration in the settlements where the displaced individuals currently reside.

According to the World Bank report “Groundswell: Preparing for Internal Climate Migration,” the number of climate migrants in Ethiopia could close to triple by 2050, with Addis Ababa set to become an urban hot spot for climate induced migration. Smaller cities, such as Jigjiga and Deri Dawa, are also expected to receive increasing waves of climate migrants.

In February 2020, Ethiopia ratified the African Union Convention for the Protection and Assistance of Internally Displaced Persons (IDPs) in Africa, a legally binding instrument for protecting internally displaced persons in Africa. There is hope this will bring greater awareness about the need to support innovative, participatory initiatives for internally displaced persons there.

Around the world, fragile city governments can partner with international humanitarian organizations, NGOs, research institutions, the private sector, U.N. agencies and other city governments to strengthen their capacities to tackle challenges at the intersection of urbanization, climate and migration.

For the Internal Displacement Monitoring Center (IDMC), a think tank based in Geneva, multi-stakeholder partnerships play a crucial role in gathering information about internally displaced persons.

“We start with the people affected — internally displaced persons and host communities — and from there, we build up the agenda, collaborating with national governments, U.N. agencies, NGOs, academia and research centers,” says Pablo Ferrández, a research associate with the IDMC.

Andrew Fuys, senior director for global migration at the nonprofit Church World Service, says that one of the priorities for research is to identify how the risks climate migrants face are similar to, or differ from, those of other internally displaced persons in cities so that organizations can provide the appropriate services for climate migrants.

Del Ministro and Peter say the long-term success of the DSI in Somalia will depend on overcoming a number of challenges. Organizers will need to ensure there are sufficient resources for community-led initiatives, overcome obstacles to coordination, and strengthen the capacities of city governments.

“Stronger capacities are needed in human resources in city planning,” Peter says. “There is a need to have financial resources available. Developing the skills and knowledge of people who are equipped to deal with challenges in cities is needed.”

“Despite the well-designed programmatic approach to implement durable solutions, unless a climate change adaptation strategy is delivered at the regional and local levels, we may expect further climate change–induced displacement,” says Baloi. “Accessing climate financing for large scale interventions to ensure adaptation and displacement prevention remains a challenge.”

Ferrández says there is also a need for decentralization so towns and smaller cities receive adequate resources to support internally displaced persons.

“Bringing efforts to achieve durable solutions from the national to municipal level also means intervening beyond areas such as Baidoa, Kismayo and Mogadishu, where the international presence is strong, to secondary cities and rural areas,” he says.

With the coming years, climate-induced migration to “urban hot spots” is likely to intensify. As it does, collaborations across sectors can help fragile city governments deliver a more effective humanitarian response in times of crisis while empowering internally displaced persons to play a central role in efforts to fully integrate into society. The hope is that, when climate migrants are given a voice in decision-making processes in fragile cities they can devise solutions that will lead to a more secure future not only for themselves and the cities in which they live, but for future generations.