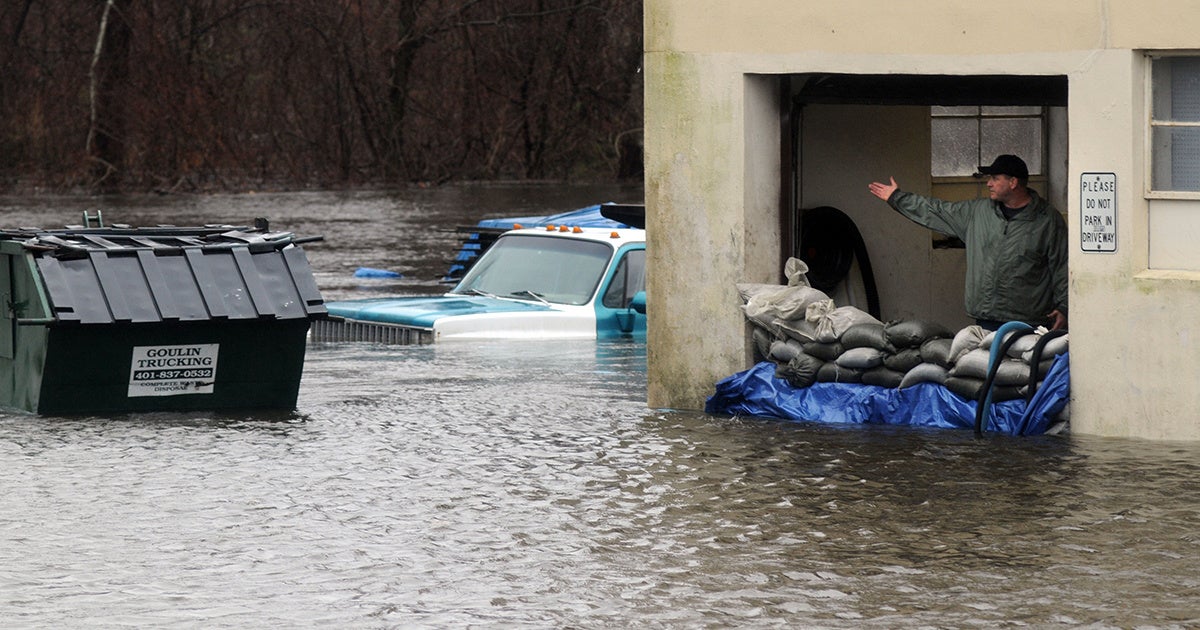 Pawtuxett River flooding on March 30, 2010 in Warwick, Rhode Island. National Guard troops were activated in Massachusetts and Rhode Island where a state of emergency was declared. Darren McCollester / Getty Images

In what one advocate called a “big win” for climate liability litigation, a federal judge on Monday remanded Rhode Island’s lawsuit targeting 21 fossil fuel giants to state court, where the oil and gas companies are more likely to be forced to pay for their significant contributions to the global climate crisis.

Last July, Rhode Island became the first state in the country to file suit against dirty energy companies — including BP, Chevron, ExxonMobil and Shell — seeking to hold them accountable for knowingly contributing to a climate emergency that is “causing catastrophic consequences to Rhode Island, our economy, our communities, our residents, our ecosystems.”

The Ocean State accused fossil fuel producers of “externalizing the responsibility” for the consequences of the human-caused crisis — such as sea level rise, drought, extreme precipitation, and heatwaves, and the damage those events cause — by expecting taxpayers to foot the bill.

The case was filed in state court. In response, the fossil fuel industry employed a strategy of trying to move climate liability suits filed by municipalities or states to federal court, where the companies are more likely to win — in part because of differences in case law.

Judge William Smith of the U.S. District Court for the District of Rhode Island delivered a blow to the industry’s strategy in his Monday ruling. Smith wrote that “because there is no federal jurisdiction under the various statutes and doctrines adverted to by defendants, the court grants the state’s motion to remand.”

“Climate change is expensive, and the state wants help paying for it,” the judge wrote. He also pointed out that the defendants, collectively, “have extracted, advertised, and sold a substantial percentage of the fossil fuels burned globally since the 1960s.”

“This activity has released an immense amount of greenhouse gas into the Earth’s atmosphere, changing its climate and leading to all kinds of displacement, death (extinctions, even), and destruction,” he continued. “What is more, defendants understood the consequences of their activity decades ago, when transitioning from fossil fuels to renewable sources of energy would have saved a world of trouble.”

“But instead of sounding the alarm, defendants went out of their way to becloud the emerging scientific consensus and further delay changes — however existentially necessary — that would in any way interfere with their multi-billion-dollar profits,” Smith added. “All while quietly readying their capital for the coming fallout.”

Ann Carlson — an environmental law professor at UCLA’s Emmett Institute on Climate Change and the Environment who has done pro-bono consulting for municipality cases — explained to Climate Liability News that “the district court’s decision to send Rhode Island’s case back to state court is important because what the oil companies are really after is dismissal of the case under federal law.”

According to Carson, “They want a big substantive outcome — to get rid of the case altogether.”

Rhode Island Democratic Attorney General Peter Neronha, who took over the state lawsuit filed by his predecessor, welcomed the judge’s ruling. He said in a statement that “as the federal court recognized, the state’s lawsuit contains no federal question or cause of action, rather, contains only state law causes of action regarding damage to Rhode Island’s resources that are better suited to resolution in the state courts.”

Smith’s decision was also celebrated by Richard Wiles, executive director of the Center for Climate Integrity, who told The Hill that “this is more bad news for Exxon and a welcome sign for taxpayers and local governments seeking just compensation for climate damages oil and gas companies knowingly caused.”

“Big oil and gas producers are desperate to stay out of state courts where tobacco lost and and opioid manufacturers are on the ropes,” said Wiles. “But now a third federal district court has ruled that state courts are where climate liability cases belong.”

Summarizing the other two wins Wiles referenced, Climate Liability News reported that “a federal judge in Maryland recently remanded Baltimore’s suit to state court and a group of California communities won a decision by U.S. District Court Judge Vince Chhabria that their cases belong in state court, a decision under appeal to the Ninth Circuit.”