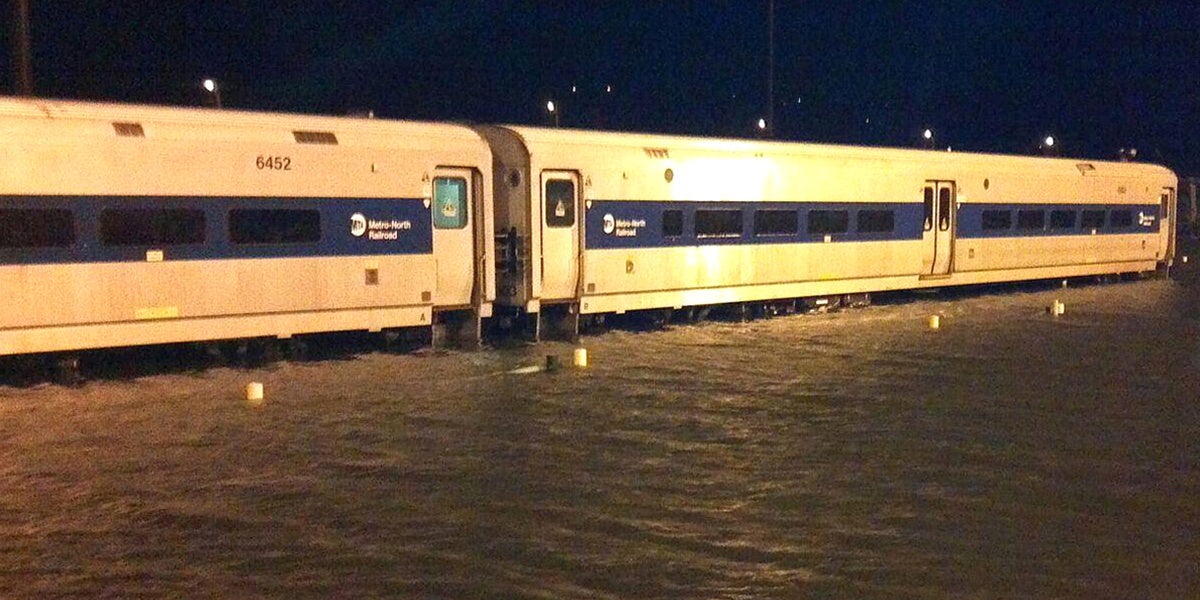 A train at Metro-North Railroad's Croton-Harmon station, in the aftermath of Hurricane Sandy on Oct. 30, 2012. Metropolitan Transportation Authority of the State of New York / CC BY 2.0

A federal judge ruled on Thursday in favor of a motion by five big oil companies to dismiss a lawsuit brought against them by New York City, which demanded they pay the costs of adapting the city’s infrastructure to climate change, The New York Times reported.

The ruling comes nearly a month after a federal judge in San Francisco dismissed a similar case brought by the cities of Oakland and San Francisco.

In his decision Thursday, Judge John F. Keenan of United States District Court for the Southern District of New York echoed the reasoning of Federal Judge William Alsup when he dismissed the San Francisco and Oakland case.

While both judges acknowledged the reality of climate change, they thought that crafting policy around it was too large an issue for the courts to settle.

“Global warming and solutions thereto must be addressed by the two other branches of government,” Keenan wrote in his decision.

But environmentalists pointed out that fossil fuel companies like the defendants had done everything in their power to stop the other branches of government from acting.

“There is a grave irony here. The fossil fuel company defendants claimed in court—and the judge apparently agreed—that it is entirely up to Congress and the President to address climate change. But these same defendants and their trade groups have fought successfully against even modest laws and regulations to cut the carbon pollution from burning fossil fuels that causes global warming,” Union of Concerned Scientists President Ken Kimmel said in a statement reported by Climate Liability News.

“The mayor believes big polluters must be held accountable for their contributions to climate change and the damage it will cause New York City. We intend to appeal this decision and to keep fighting for New Yorkers who will bear the brunt of climate change,” he told The New York Times.

The city had argued that the defendants―Chevron, ConocoPhillips, ExxonMobil, BP and Royal Dutch Shell―had known about the risks posed by burning fossil fuels since the 1950s and had “engaged in an overt public relations campaign intended to cast doubt on climate science,” an argument Keenan acknowledged in his decision.

The cases brought by New York, San Francisco, Oakland and other municipalities attempt to sue oil companies using state public nuisance law that allows courts to find defendants liable for interfering with the use of property, according to The New York Times.

Attempts to sue oil companies over climate change under federal nuisance law led to a Supreme Court decision in 2011 ruling that the Clean Air Act displaced nuisance law on the federal level and put the U.S. Environmental Protection Agency (EPA) in charge of dealing with the issue.

The new batch of lawsuits argues state nuisance law still applies, but Keenan rejected the idea that state law would apply to the city’s lawsuit, saying climate change was an area of “federal concern,” The New York Times reported.

“The cases that are either filed in federal court or—as with the San Francisco and Oakland cases—removed to federal court are decided under federal law,” University of California Los Angeles environmental law professor Ann Carlson told Climate Liability News. “Federal nuisance law is much less favorable for the cities and counties than state law is. The state courts are where we are likely to see interesting and perhaps surprising rulings.”