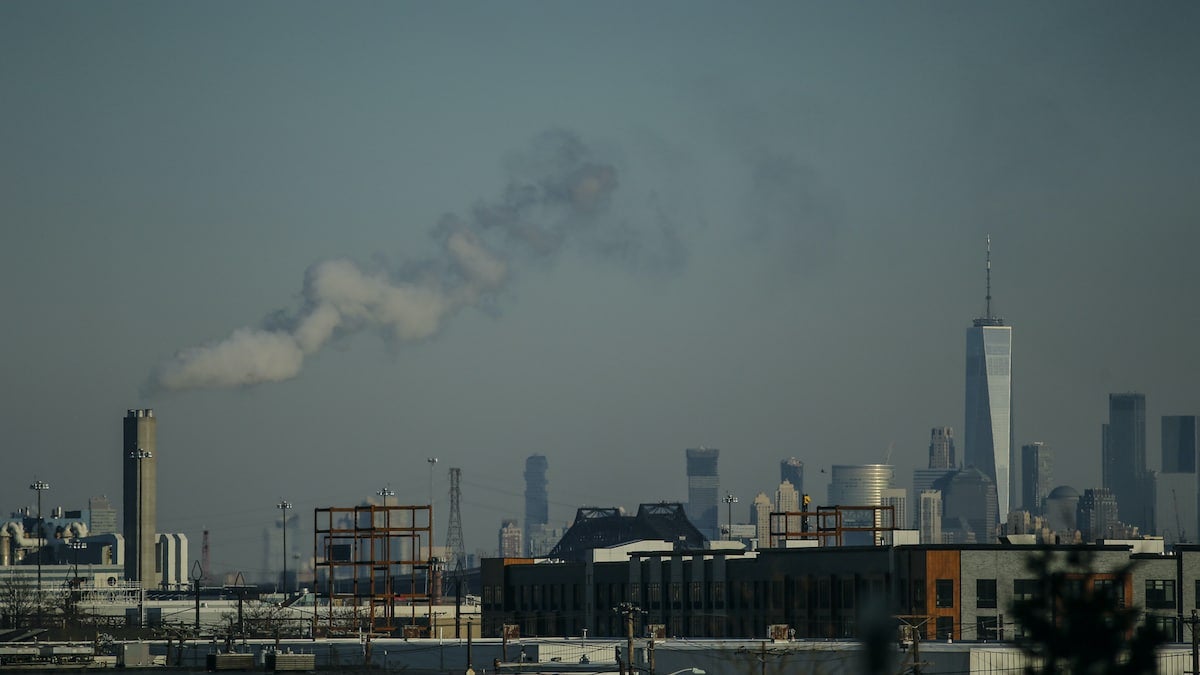 A factory in Newark, N.J. emits smoke in the shadow of NYC on January 18, 2018. Kena Betancur / VIEWpress / Corbis / Getty Images

These rule suspensions ended last month, but they almost undoubtedly caused an increase in pollution rates, as one preliminary study already found. What’s worse is that we’ll likely never know the full extent of the damage, as the agency also suspended rules for self-monitoring (and even before the pandemic monitoring was already limited). Analysts at the Environmental Data and Governance Initiative found that, in March and April, industrial polluters conducted 40 percent fewer tests compared to the same time in 2019, according to self-reported data.

In a country where pollution impacts are disproportionately impactful, the suspension of pollution rules in the middle of a respiratory illness outbreak is unconscionable — several studies have found that higher pollution exposure can lead to higher rates of death due to COVID-19.

But, given the stark differences between racial groups when it comes to pollution exposure and effects, the temporary policy is downright racist. A 2018 study from the EPA itself found that, respectively, Black and Latinx communities were exposed to 1.5 and 1.2 times more particulate matter, a pollutant that can cause damage to the respiratory system, than white communities. Another study published in the New England Journal of Medicine in 2017 found that Black people were three times more likely to die from exposure to particulate matter than the overall population.

Under Trump, federal climate policy has only become less and less stringent — The New York Times has documented 100 environmental rollbacks thus far. Such rollbacks are bad news for everyone, but they’re especially harmful for Black and minority communities, which have borne the brunt of pollution for decades.

The fact that Black and brown people suffer most under environmental degradation is not news. But the dilemmas remain in the environmental justice community as they have for many years: How do we lessen the climate burden on Black and oppressed communities? How can we achieve equitable and drastic emissions reductions and transform our entire economy before the window of opportunity to prevent irreversible climate change closes?

For decades, one of the only legal tools available to an environmental justice advocate was the National Environmental Policy Act, or NEPA, was written in the late 1960s in response to historical disasters like oil spills and injustices like the destruction of poor neighborhoods to build highways. Over the years, NEPA has been an extraordinary useful framework for communities to lessen or prevent environmental impacts of federal projects — in 2018, a judge cited NEPA when they blocked the Trump administration’s attempt to fast-track the Keystone XL pipeline.

While NEPA has helped countless communities in protecting against potentially harmful impacts, however, it also has major limitations. Though NEPA forces agencies to consider the potential impacts of a project, it doesn’t require stopping or even mitigating those impacts. This is partially what has allowed polluters to choke out disproportionately Black communities like Louisiana’s “Cancer Alley” and New York City’s “Asthma Alley” in the past decades. Early this year, the Trump administration radically rewrote NEPA so that it would give more power to polluters, limiting public input on projects and eliminating the consideration of cumulative impacts.

“A big challenge is the way that NEPA intersects with other racist policies like redlining and things that existed prior to NEPA,” says Sally Hardin, who formerly worked on the council that oversees NEPA and is the interim director on energy and environment at the Center for American Progress (CAP). While NEPA is a tool that communities can use to challenge projects such as the construction of a new oil refinery, the process requires time and resources that many can’t afford; poor neighborhoods that can’t afford to hire lawyers to review legalese or where citizens don’t have time to show up to public hearings are more likely to find themselves with a new refinery than a wealthy neighborhood.

When communities do have the time and resources to oppose a project, though, states will find a different way to get around them. Legislators in Louisiana, for instance, who often receive financial incentives from oil and gas companies and chemical manufacturers, have attempted to outlaw protests against these projects.

So, while environmental advocates can use NEPA as a tool to further justice, entrenched racial and class disparities in the U.S. will be extremely difficult to undo, no matter the policy or politician. To Peggy Shepard, the executive director of WE ACT for Environmental Justice, the problem presents itself before NEPA can even come into the equation. Part of the issue, Shepard says, lies in permitting.

Yet another issue lies in unequal enforcement of certain laws, especially along financial lines — a 2009 study found that agencies did not enforce crucial pollution laws in poor counties as much as richer counties.

And, in some ways, unequal enforcement can be built into the laws themselves. For instance, as Climate and Energy Policy director at the Union of Concerned Scientists Rachel Cleetus raises, the Army Corps determines and allocates resources for defensive measures for such events as flooding using a cost-benefit analysis. That analysis benefits richer communities because the market value of the property being lost is higher.

“There are lots of ways in which you can have neutral-sounding laws, but if you don’t get out some of these underlying things and specifically target resources to set them right in some way, you’re gonna end up with skewed outcomes,” says Cleetus.

In Congress, some legislators are working to solve some of these problems at a federal level. Last month, Rep. Alexandria Ocasio-Cortez (D-New York) and Sen. Kamala Harris (D-California) introduced the Climate Equity Act, which would introduce the Office of Climate and Environmental Justice Accountability within the Office of Management and Budget and require relevant agencies to appoint a director of environmental justice. It would also require environmental legislation to come with an “equity score” that rates the impact of the legislation on frontline and poor communities.

“The difficulty [with the equity score] comes in defining who those communities should be and how (and that definition should ABSOLUTELY be created by, and with, the impacted communities themselves),” says Hardin in an email to Truthout. The Climate Equity Act was crafted from advice from environmental justice coalitions, and though the bill likely won’t pass soon, coalitions and communities most impacted must have a say in the process.

Though there are many hurdles to yet to clear, environmental justice movements have been making big moves across the country in the past few years. Initiatives like the Equitable and Just National Climate Platform and the Environmental Justice for All Act have gained momentum among Democrats; and local groups are getting the attention of politicians to address some of the largest hurdles — permitting, unfair lawmaking and gaining grassroots political power.

Last week, Gov. Phil Murphy (D-New Jersey) signed an environmental justice law unlike any other in the country: Despite powerful industry opposition that stalled the bill for years, the new state law will require permits for projects like power plants and landfills to be rejected if they are to be cited in an already overburdened neighborhood. Other states require agencies to merely consider cumulative impacts in the permitting process with no mandate to act on that consideration — formerly, NEPA required all government-funded projects to consider cumulative impacts, but the Trump administration, in its gutting of NEPA this year, rolled that rule back.

The bill was passed due to the tireless work of grassroots activists and environmental justice groups — Ironbound Community Corporation, New Jersey Environmental Justice Alliance and Clean Water Action — who fought chemical and waste industry lobbyists and Murphy’s administration to push the bill through.

Grassroots and activist groups have helped Joe Biden better his climate platform, too, as he unveiled a new plan in July — his environmental justice plan is surprisingly good for candidate whose climate plan as a whole got an “F” from the Sunrise Movement last year. The plan includes creating and elevating climate justice divisions in the federal government and the White House, mandate pollution monitoring in frontline communities — which is currently notoriously terrible — and spend 40 percent of the overall investments in the climate plan on disadvantaged communities.

But Trump has reversed much of the progress on climate that the country has made not only since the Obama administration, but also from decades ago — including outright eliminating funding for environmental justice at the EPA. From here, as the climate crisis rages on, progress will be ever more vital to make. And, despite Biden’s progress in climate over the course of the election, climate activists have their work cut out for them – no matter who’s in office come January.

This story originally appeared in Truthout and is republished here as part of Covering Climate Now, a global journalism collaboration strengthening coverage of the climate story.