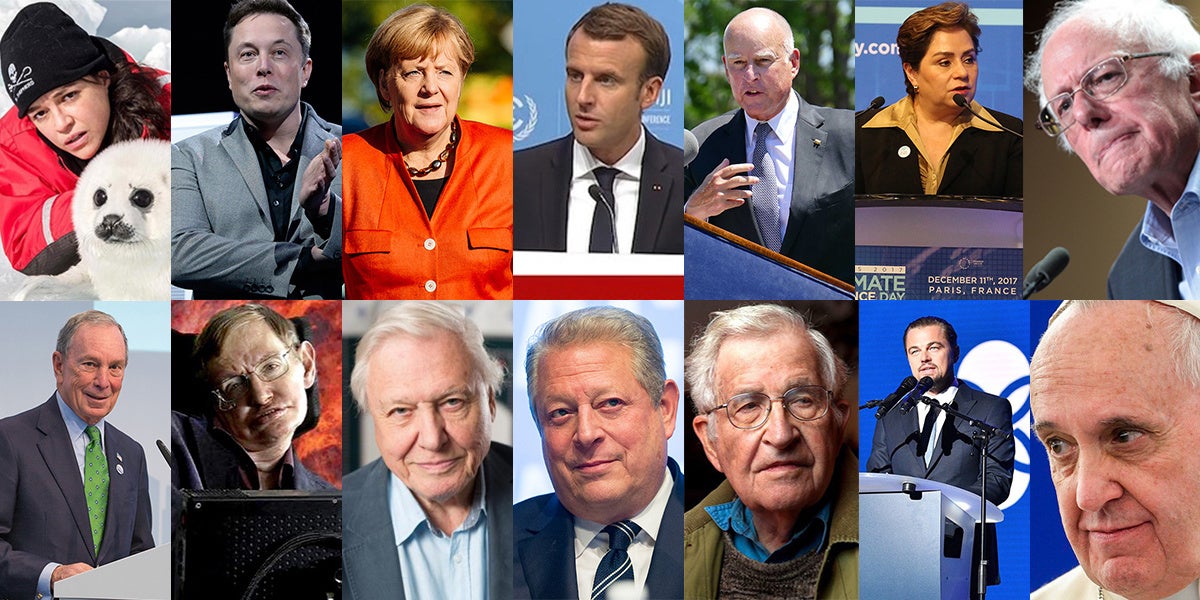 This was a year of tug-of-war for the environment. With Donald Trump becoming president of the U.S. at a time when wildfires, hurricanes, and floods were devastating the country, it was challenging for scientists, activists and concerned citizens to get their voices heard. But several stood out as global leaders on climate and helped give rise to those who were silenced. Below are 14 of the most notable influencers of 2017 and how they fought for a cleaner, safer environment for all. 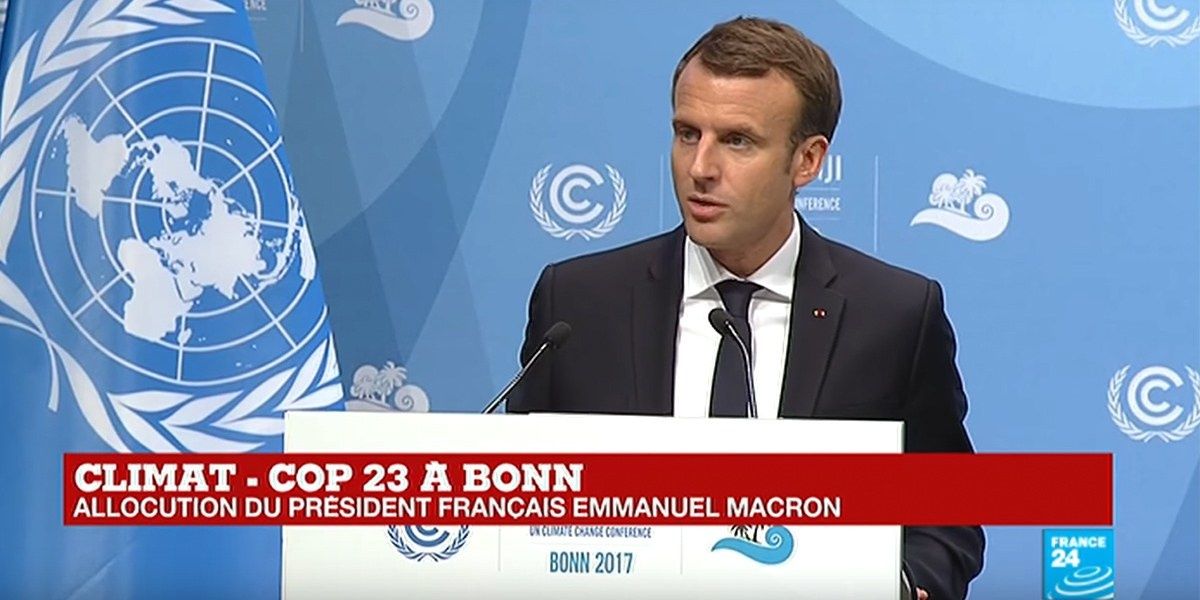 After his inauguration as president of France, just a few months after U.S. President Donald Trump, Emmanuel Macron made immediate waves. He started off by addressing Trump’s withdrawal from the Paris agreement with a “Make Earth Great Again” slogan and welcoming American climate scientists to France to continue their research. He forged on, offering multi-year grants totaling $70 million. Macron also hosted the One Planet Summit where 20 international companies announced they would phase out coal. With his continued criticism of Trump’s decisions regarding the planet, Macron has proven himself a global leader on climate change and has set the stage for progress in 2018. 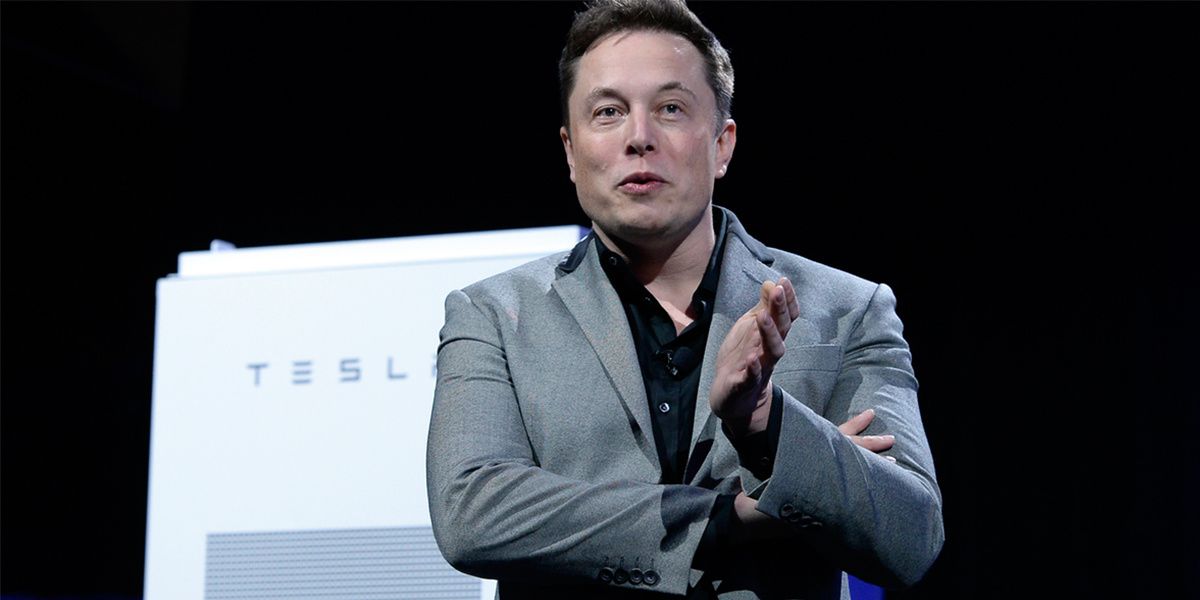 Elon Musk, entrepreneur and founder of several companies including SpaceX, Tesla and SolarCity, began 2017 with a seat on President Trump’s economic advisory council. Musk made multiple attempts to reverse Trump’s stance on climate change, but after Trump’s decision to withdraw from the Paris agreement, Musk left the council on June 1, causing a huge media storm. Then in October, when Hurricane Maria devastated Puerto Rico and left the islands without power, Musk swooped in and began building a solar grid. He started with restoring a children’s hospital in San Juan and has continued delivering and installing Tesla battery systems since. Musk has also made huge strides in green technology with his push for electric vehicles and renewable energy in the U.S., despite the Trump administration’s favoritism towards the fossil fuel industry. 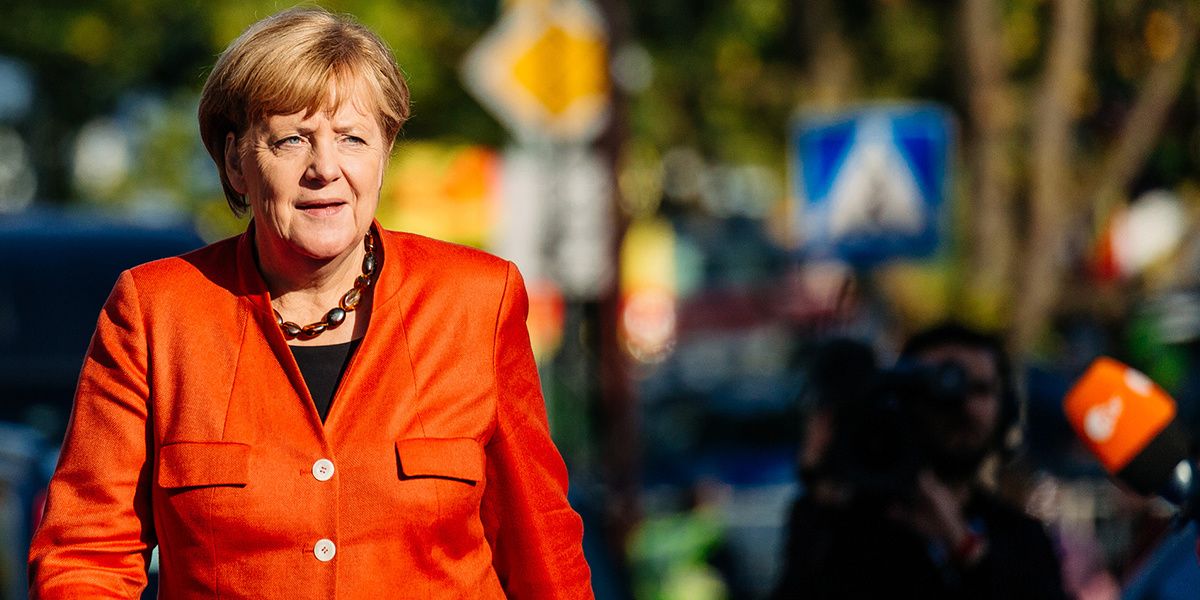 German Chancellor Angela Merkel has stepped up to the plate as one of 2017’s female leaders on climate in a multitude of ways. Nicknamed the “Climate Chancellor,” Merkel has outwardly expressed her differences with Trump, calling his stance on climate change “regrettable.” She reassured the UN that Germany would uphold its targets for the Paris agreement, despite the U.S. change of heart. She has also made significant progress in ensuring sustainable growth in Germany with the G20 Hamburg Climate and Energy Action Plan for Growth. Then, in November at the COP23 in Bonn, Germany, Merkel sent a strong message to all global leaders, saying “we will not be able to adhere to the 2°C or 1.5°C target with the current national commitments. That is why each and every contribution is incredibly important.” 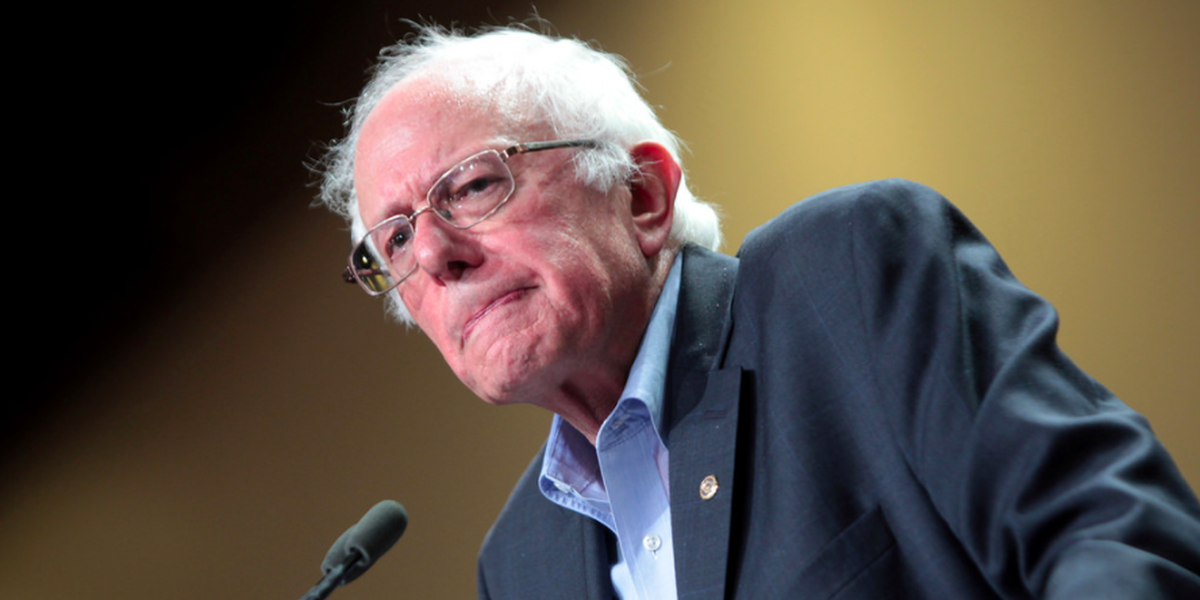 Senator Bernie Sanders didn’t let his loss in the 2016 presidential race stop him from speaking out on climate. In 2017, Sanders relentlessly criticized Trump’s rejection of the Paris agreement and his outright denial of climate science. He is one of the few politicians who has spoke out about the Energy and Natural Resources Act of 2017, which aims to expand the fossil fuel industry. He also introduced a $146 billion recovery package for Puerto Rico, after Hurricane Maria hit and Trump neglected to provide relief. The package would rebuild Puerto Rico’s infrastructure with sustainable resources. He also helped to introduce the 100 by 50 Act, which would support workers in the fossil fuel industry while simultaneously phasing out fossil fuels by 2050. 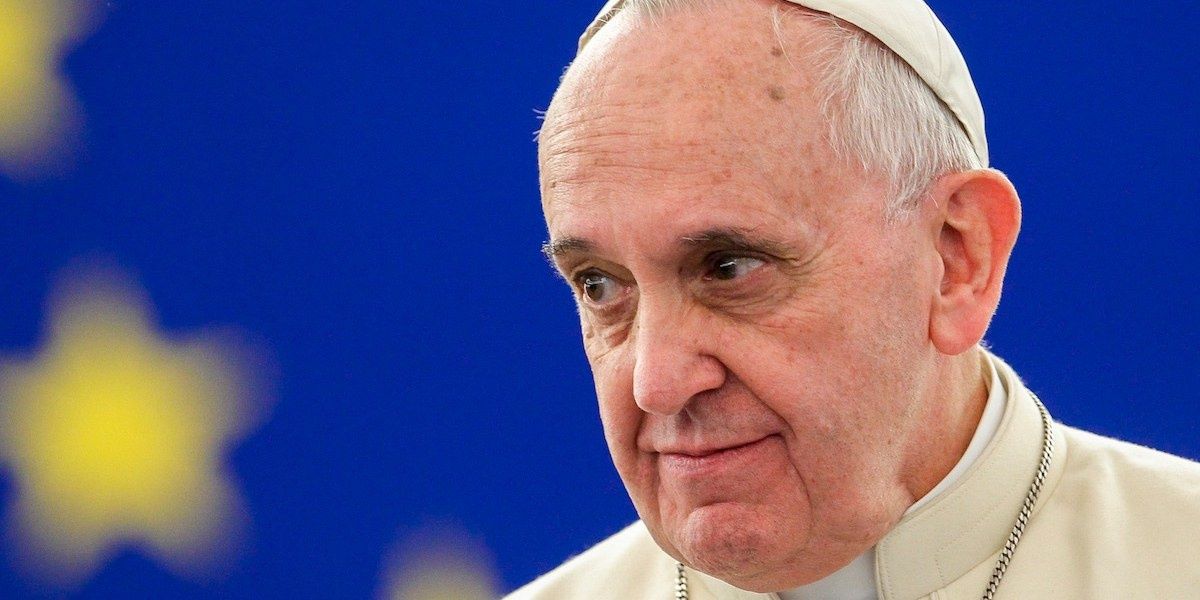 Pope Francis has openly condemned climate change deniers for years, but 2017 might have been the most radical year yet for the sovereign. In February, the Pope spoke up for indigenous peoples and their right to consent when it comes to government activities on their sacred lands. The strong words came shortly after President Trump signed two executive orders calling for the approval of the Dakota Access and Keystone XL pipelines in January, though the Vatican said the timing was coincidental. On World Food Day in October, the Pope urged governments to mitigate climate change, as it is a lead driver of the increase in world hunger. And in November at COP23, he outlined four “perverse attitudes” that are preventing climate action. To top it off, he also acquired an electric car. 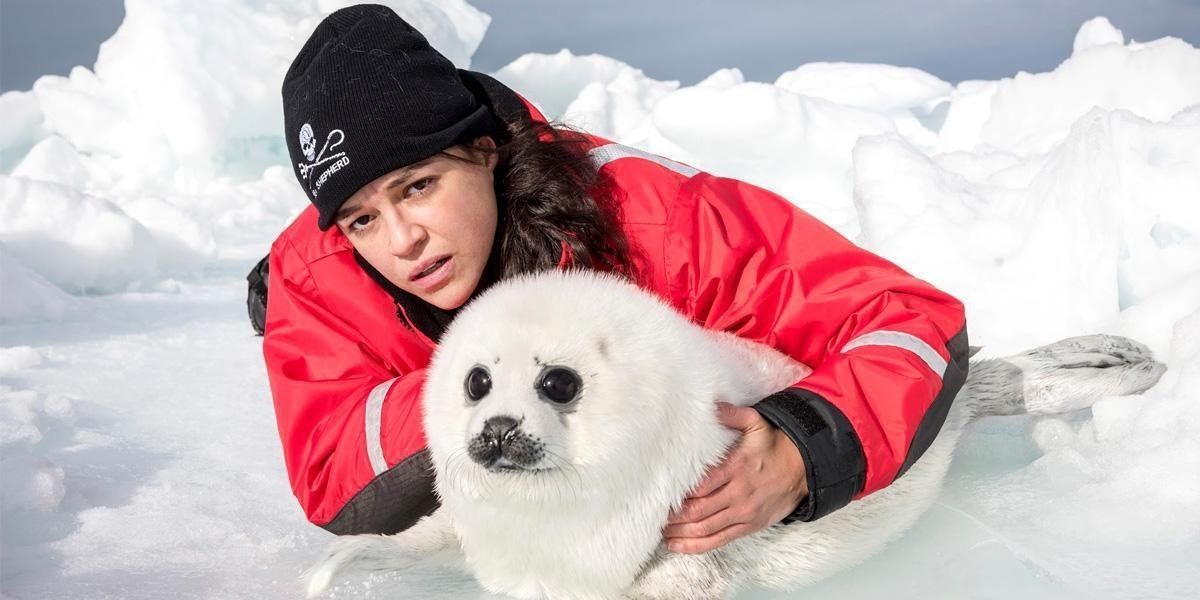 Actress and climate activist Michelle Rodriguez is one of the newer voices of the climate movement. In March, Rodriguez joined an all-woman survey team known as Operation Ice Watch on an expedition to the Gulf of St. Lawrence in Canada where the seal population is under siege by hunting and ice loss caused by climate change. Led by the Sea Shepherd Conservation Society and Animal Justice, the crew surveyed the ice, or lack thereof, while filming a documentary to raise awareness about the “ecological catastrophe.” Rodriguez also partnered with Operation Taino Spirit Promise and Sea Shepherd to provide relief to Puerto Rico after Hurricane Maria struck and start a campaign for a sustainable rebuild. 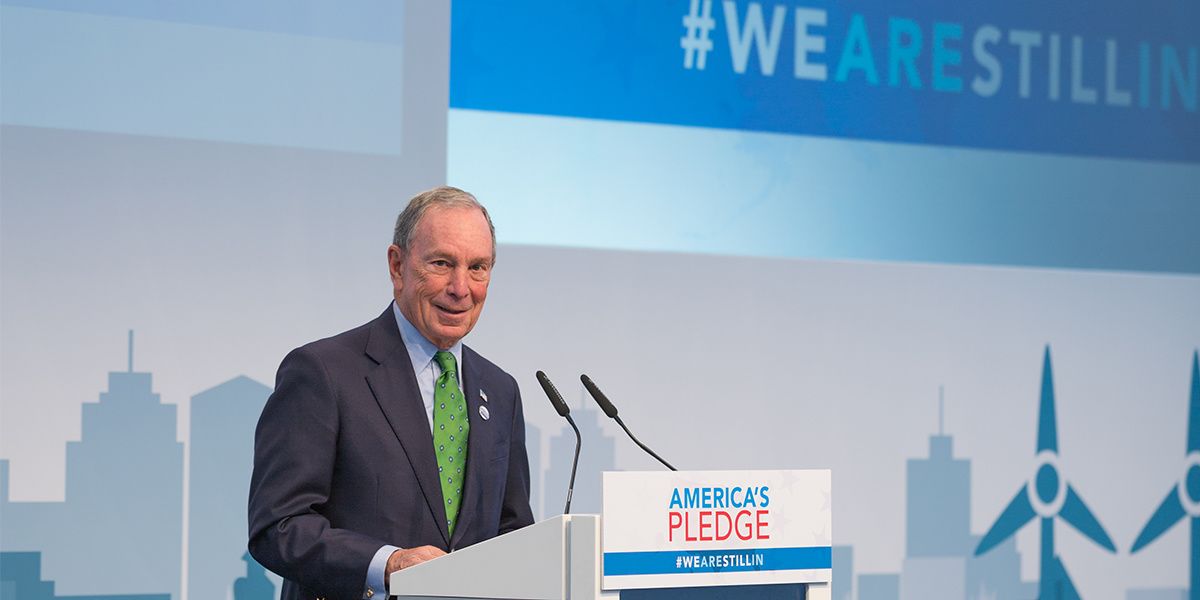 Former New York City Mayor Michael Bloomberg was also a notable influencer of 2017, representing the U.S. at COP23 where he, alongside Governors Jerry Brown of California and Jay Inslee of Washington introduced the We Are Still In coalition, a network of U.S. politicians who support climate action despite Trump’s withdrawal from the Paris agreement. In October, Bloomberg also announced that his charity would donate $64 million to the retirement of U.S. coal plants, greatly impeding Trump’s efforts to revive the American coal industry. 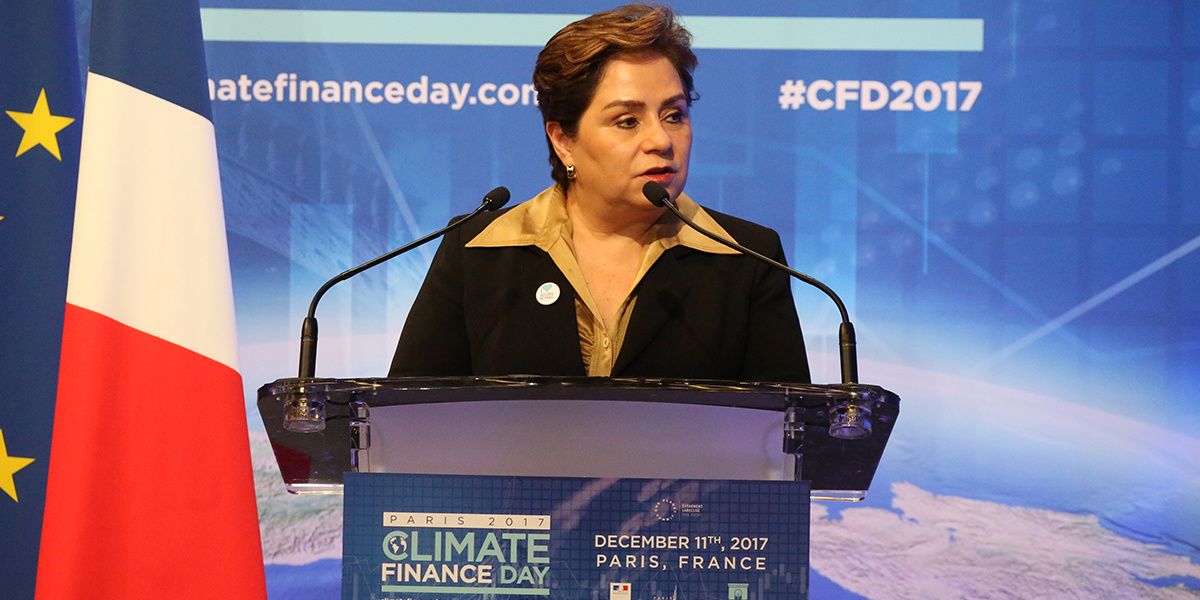 Mexican politician and current executive secretary of the United Nations Framework Convention on Climate Change, Patricia Espinosa made significant progress on shifting the dialogue surrounding climate action in 2017. In February, she said getting fossil fuel companies “on board” is a critical factor in combating climate change. She also used her position to direct the climate conversation away from technology and toward security, arguing that security officials “understand that our current crisis pales in comparison to what is coming if climate change is left unchecked.” She also spoke about women’s involvement at COP23 and introduced the Gender Action Plan to promote meaningful participation by women in the climate movement. 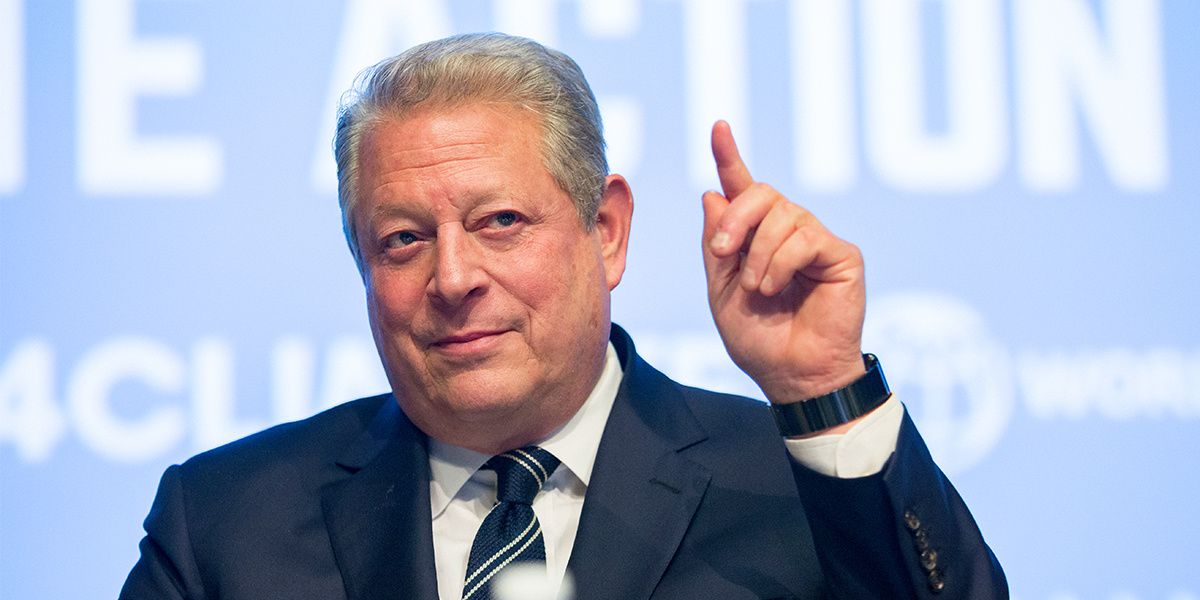 Former vice president and environment activist Al Gore is known for his stance on climate change. But in 2017, with the release of his newest documentary “An Inconvenient Sequel: Truth to Power,” Gore found another big spotlight. In July, he boldly predicted that the U.S. would still meet the targets of the Paris agreement, despite Trump’s about-face in June. On Dec. 4-5, Gore also hosted the Climate Reality Project’s “24 Hours of Reality,” where he highlighted citizens taking action all across the globe to inspire others to do the same. The program reached more than half a billion viewers on TV and 32 million online, making it the world’s largest social broadcast on climate to date. At almost every turn for the past 365 days, California Governor Jerry Brown has undermined President Trump. In June, almost immediately after Trump’s withdrawal from the Paris agreement, Brown partnered with Chinese President Xi Jinping to continue expanding green technology and trade. In July, Brown extended California’s climate legislation to reduce greenhouse gas emissions, to 40 percent below 1990 levels by 2030. And as wildfires have raged through the state and region, Brown said he was “linking with other similar-minded people all over the world” and “pushing forward even as Trump blusters.” 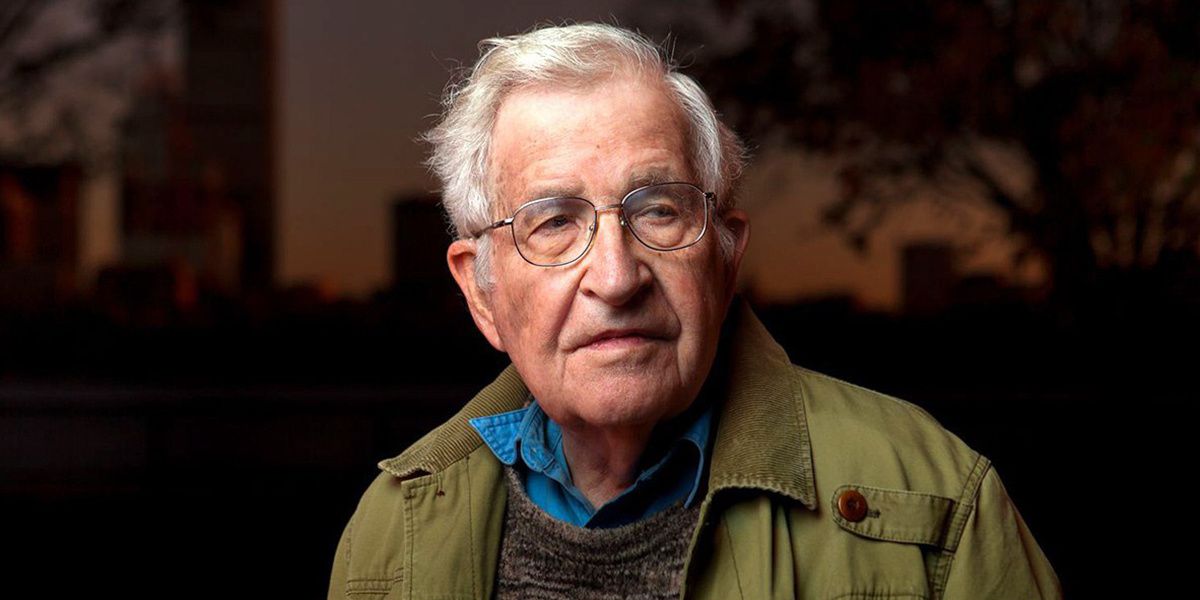 Well known linguist and scientist Noam Chomsky spoke out numerous times in 2017 for the sake of the environment. In an interview with Truthout in March, Chomsky called out the Trump administration for cutting federal spending to the U.S Environmental Protection Agency and the Department of Energy, stating that his actions are an “attack against future generations.” In May he spoke out again, telling BBC Newsnight that the Republican Party’s denial of climate change has made them the most dangerous organization “in human history.” Chomsky’s criticisms opened up an intellectual dialogue for conservative voters and encouraged the scientific community to weigh in. 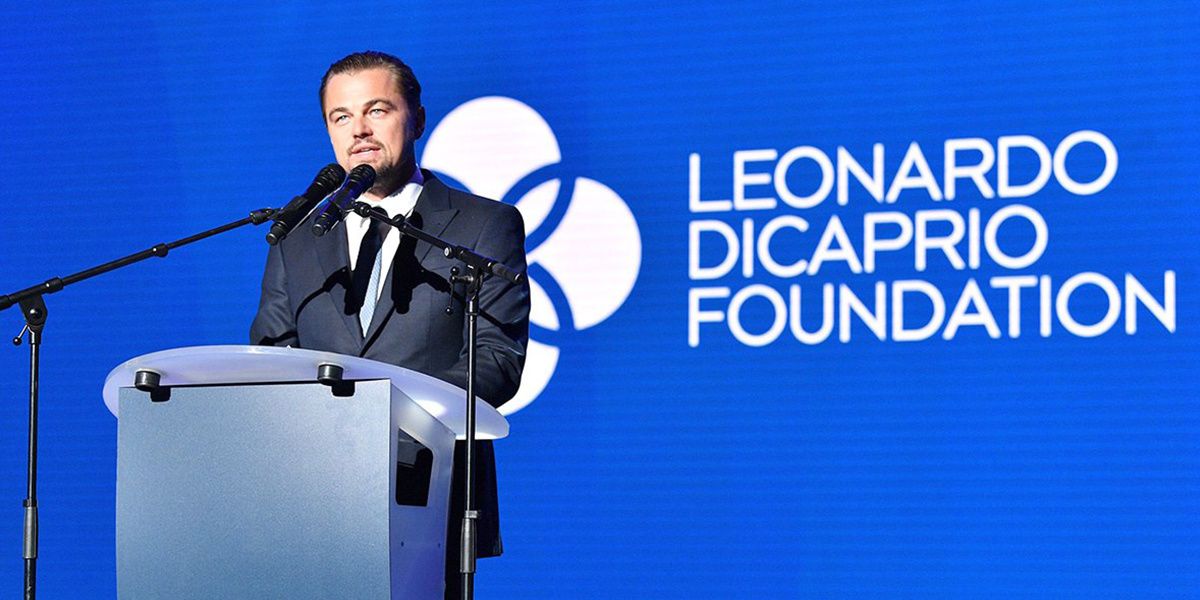 Actor and philanthropist Leonardo DiCaprio made impressive strides on climate action in 2017, including investing in the entirely plant-based food company Beyond Meat and a farm-raised seafood company LoveTheWild. In June, DiCaprio also partnered with Mexican President Enrique Peña Nieto to conserve the Gulf of California for the vaquita porpoise, classified as the most endangered marine mammal in the world. Most recently, at the Yale Climate Change Conference in September, DiCaprio announced that his foundation will be awarding $20 million in grants to more than 100 environmental organizations. 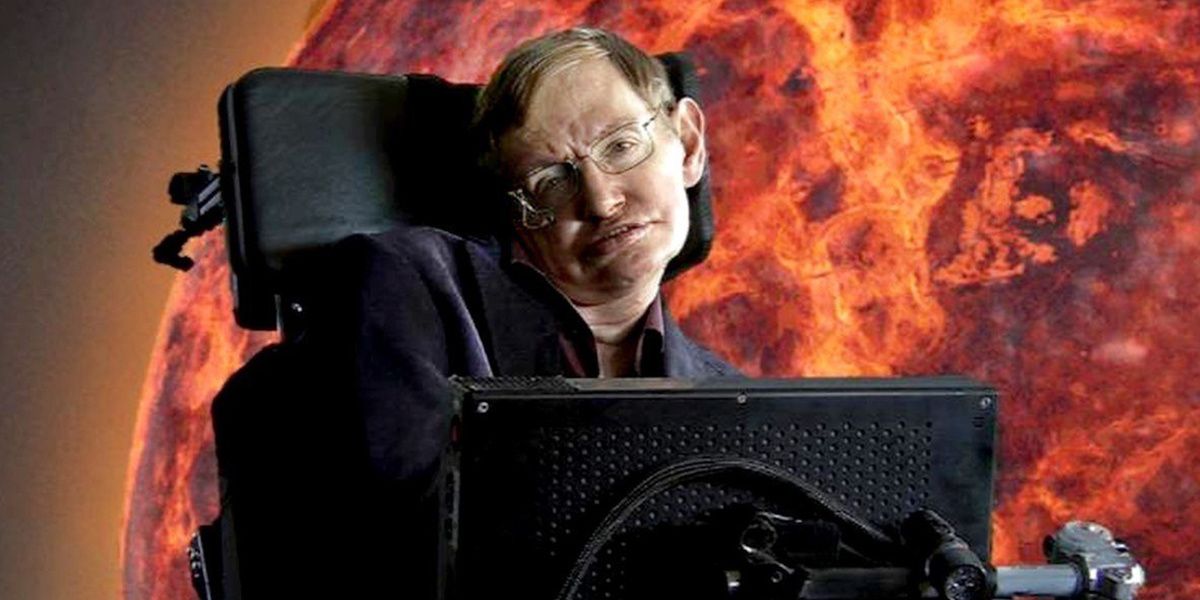 World-renowned theoretical physicist Stephen Hawking represented the majority of the scientific community in 2017 on several occasions, urging Trump to stop denying evidence of climate change. In June, Hawking had a few choice words about the U.S. withdrawal from the Paris agreement, warning that “we are close to the tipping point where global warming becomes irreversible.” And in November, Hawking once again pushed Trump to stop denying climate change and take action. Hawking nearly gave up on Earth altogether, telling WIRED UK that “our Earth is becoming too small for us, global population is increasing at an alarming rate and we are in danger of self-destructing.” 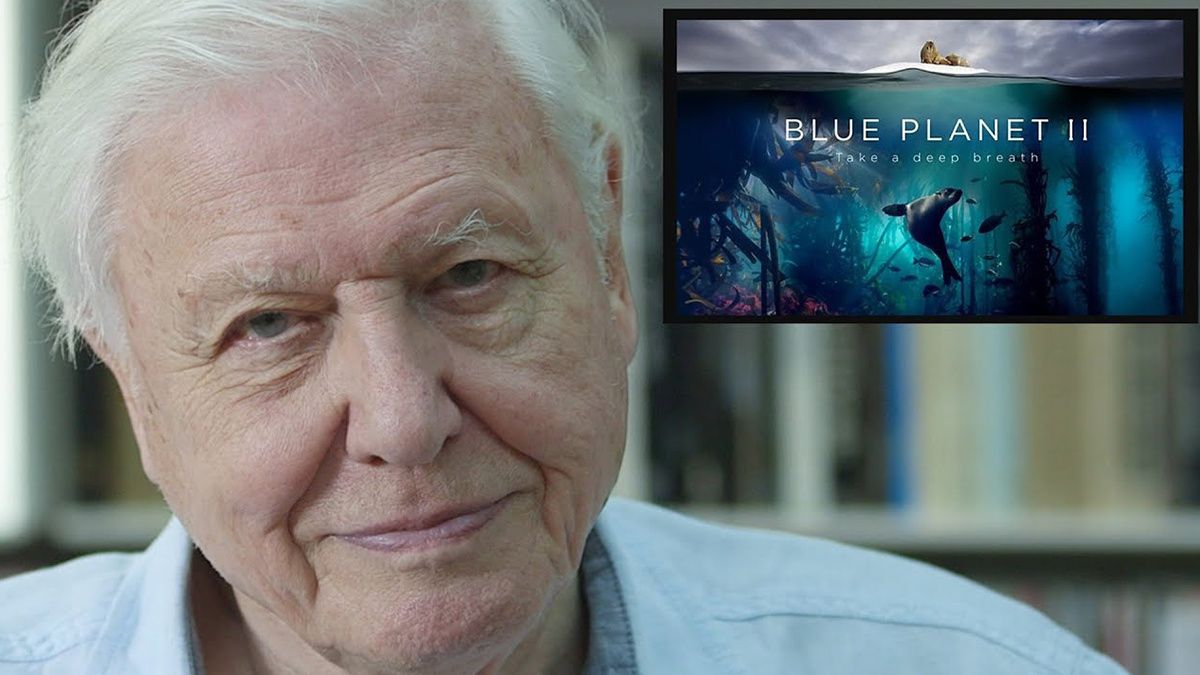 English documentary filmmaker and naturalist David Attenborough, whose series Blue Planet II began in October, spoke out several times on plastic pollution in 2017. In September, Attenborough told Greenpeace of the “heartbreaking” footage he recorded of mother birds feeding their babies plastic, an iconic moment for him that pushed him to speak up about plastic pollution in oceans., and tell Trump to reconsider his withdrawal from the Paris agreement. He emphasized that “never before have we been so aware of what we are doing to our planet—and never before have we had such power to do something about it.”