Cutting Emissions in Buildings Is Critical to Fighting Climate Change 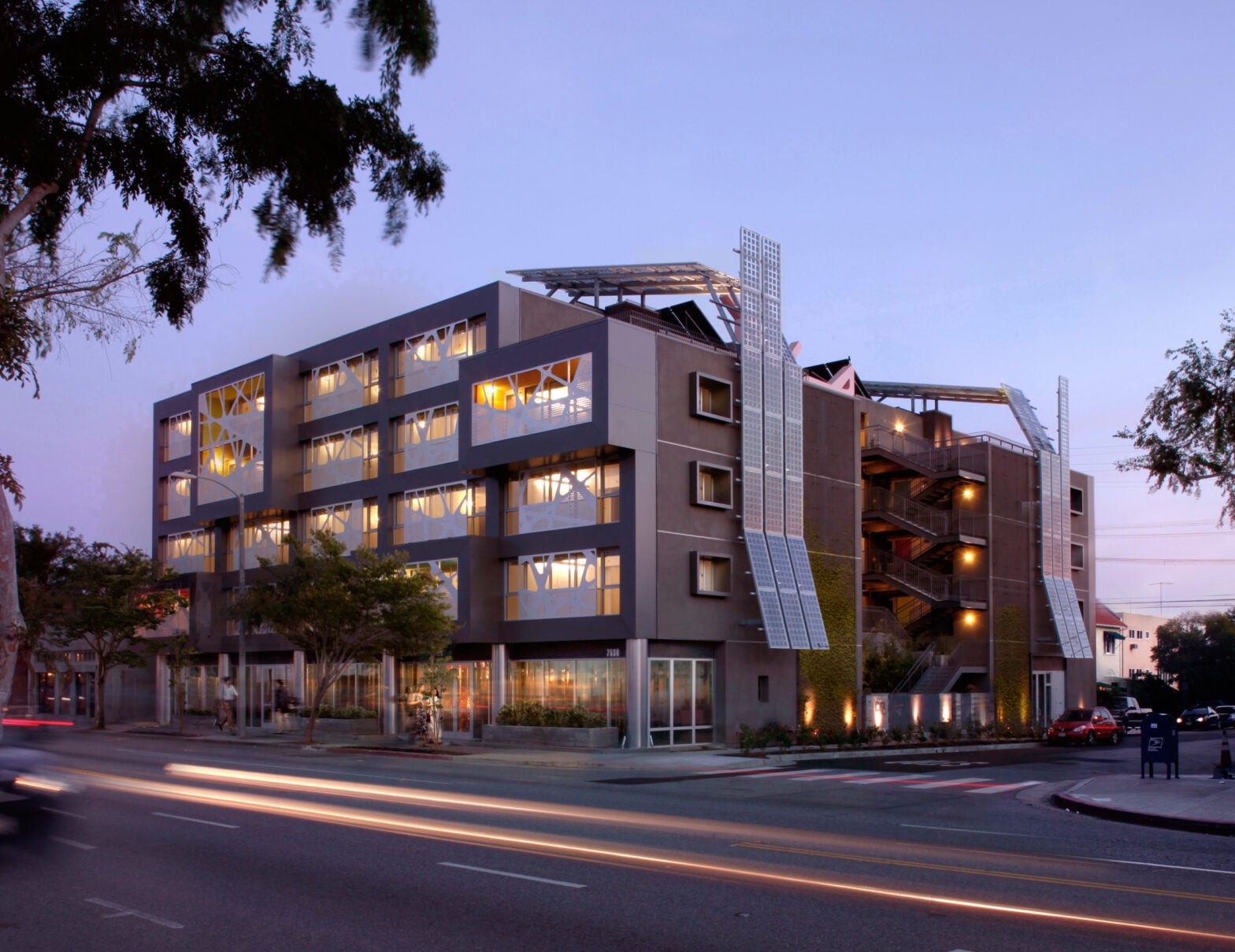 The Sierra Bonita mixed use housing project in West Hollywood, California is a sustainable building. Patrick Tighe/CC BY 3.0

Reducing pollution from direct use of fossil fuels in buildings—such as burning natural gas, propane, and fuel oil in furnaces and water heaters—is critical to helping us stave off dangerous climate change and cut harmful pollution.

It lays out a bold yet achievable strategy for slashing U.S. carbon emissions by 80 percent by 2050 from 1990 levels, an amount that scientists say is necessary to prevent the worst effects of a warming planet.

The report spotlights the importance of “decarbonizing” direct energy use in buildings, an often overlooked, but critical strategy to reduce carbon pollution. It must be pursued much more aggressively as fossil fuel use in buildings represents about 28 percent of U.S. building energy-related emissions.

There are three main interrelated strategies for achieving deep cuts in carbon emissions from energy use in buildings:

1. The first is energy efficiency aka smarter energy use. Better insulated buildings and more efficient equipment within them are critical to achieving the study’s carbon goals. But these are not sufficient;

3. Third, cleaning up the remaining fuels still used in buildings by replacing them with renewable fuels, including sustainably produced biogas produced from landfills, wastewater treatment plants or farms; and synthetic natural gas (aka “power-to-gas”) produced by using renewable electricity to electrolyze water and then converting the resulting hydrogen to methane.

NRDC’s Pathway scenario calls for roughly 90 percent of U.S. residential and commercial buildings to use electric space- and water-heating appliances by 2050, up from just under half today. The transition would occur as existing buildings are upgraded, and appliances reach their end life and can be replaced with a high efficiency electric model.

We chose electrification as the primary strategy in buildings in our modeling of how to reach the “80 by 50” emissions reduction target because sustainable sources of biogas are limited, and power-to-gas is prohibitively expensive today—the prospects of renewable synthetic gas becoming competitive with electrification in buildings are possible, albeit a long shot. We therefore prioritized the use of scarce and more expensive biofuels and renewable synthetic fuels, in sectors that are more difficult to decarbonize than buildings, such as industrial boilers, long-distance trucks, and planes.

We recognize that this is not the only pathway to decarbonize buildings, and other routes that include higher use of renewable fuels in buildings may also be an option, depending on how technology and the market develop over the coming decades.

The NRDC report comes at a critical time. With President Trump recklessly shrugging off the urgent threat of climate change and rolling back progress we have made in reducing carbon pollution, it has become imperative for cities, states and businesses to confront the crisis.

Among the actions presenting significant pollution reduction opportunities is a large-scale shift to high-efficiency electric alternatives over fossil fuel-fired equipment in residential and commercial buildings.

Remarkably, space heating constitutes the greatest portion of fossil fuel use in buildings, including roughly a quarter of household energy use, and it tends to influence the fuel choice for other domestic appliances such as water heaters, stoves, and clothes dryers. Hot water production is the second-largest component of home energy consumption at 13 percent.

In California, natural gas alone, when burned in furnaces and water heaters, is responsible for roughly half of all carbon emissions associated with energy use in buildings. This is due to both a high reliance on natural gas for heat in buildings, and a relatively clean grid which makes electric end uses a smaller share of overall emissions than the national average.

We already have seen progress in making buildings and household appliances more efficient in California and elsewhere through building energy codes and efficiency standards. But we also can convert space and water heating systems that currently rely on fossil fuels to electricity generated by clean sources such as solar and wind power.

For example, heat pump water heaters are 2.5 to 3 times as efficient as conventional electric models, and cut emissions by half or more compared to the most efficient gas water heaters.

Building decarbonization represents a paradigm shift, as NRDC’s report notes. But it’s a shift that is both necessary and sensible. To achieve our decarbonization goals, NRDC’s scenario calls for electricity to supply about 45 percent of all end-use energy, up from about one-fifth in 2015.

Despite its potential to save energy and reduce carbon pollution, challenges remain to rapidly decarbonize buildings. They include low consumer awareness, limited contractor expertise, and higher upfront costs for high-efficiency products as compared with less efficient models.

In California, NRDC was among a diverse group of 27 organizations that asked the state Public Utilities Commission to revise a policy that currently restricts the use of energy efficiency incentives for projects that involve switching between types of energy; for example a rebate to help pay for switching from a minimum efficiency gas water heater to a super-efficient electric water heater. We’re eagerly waiting for a decision.

The technology exists today to significantly reduce fossil fuel use inside buildings. But we must get to work right away. As the NRDC report notes, if we fail to act, we will lock ourselves into a dirtier energy system and may not be able to thwart the most dangerous impacts of fossil energy use to our health, our economy and our environment. The shift to cleaner energy promises to reduce harmful pollution, generate jobs, strengthen the grid, and save consumers money. It’s really a no-brainer.