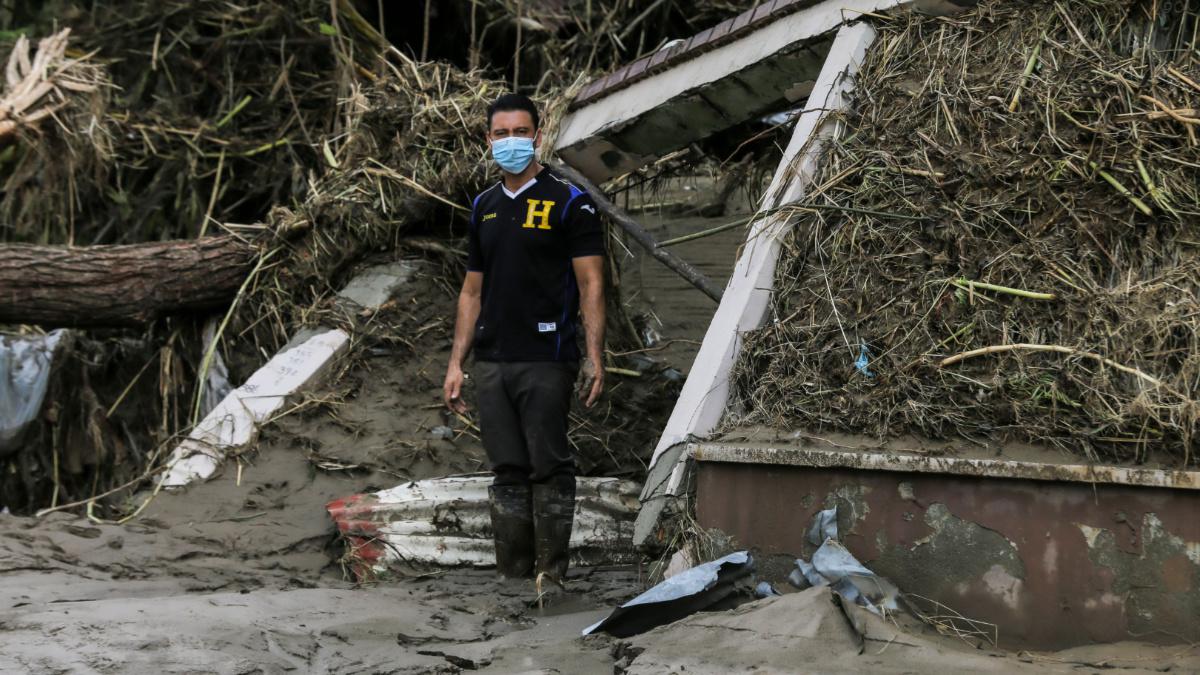 A man stands in front of what is left of his home following Hurricane Iota in Honduras on November 20, 2020. Wendell Escoto / AFP / Getty Images

One year after over 11,000 scientists from 153 countries came together to declare a climate emergency and urge ambitious action, the Oregon State University researchers who launched that effort said on Wednesday that an urgent massive-scale mobilization is necessary to address the human-caused global crisis.

As Common Dreams reported last year, William Ripple, distinguished professor of ecology in OSU’s College of Forestry, and postdoctoral scholar Christopher Wolf co-authored a paper in BioScience. Backed by thousands of scientists, they wrote that greenhouse gas missions “are still rapidly rising, with increasingly damaging effects on the Earth’s climate” and “an immense increase of scale in endeavors to conserve our biosphere is needed to avoid untold suffering due to the climate crisis.”

Ripple and Wolf—along with William R. Moomaw of Tufts University, Thomas M. Newsome of the University of Sydney, and Phoebe Barnard of the University of Cape Town—reiterated those messages in The Climate Emergency: 2020 in Review, published Wednesday in Scientific American. As they put it:

The climate emergency has arrived and is accelerating more rapidly than most scientists anticipated, and many of them are deeply concerned. The adverse effects of climate change are much more severe than expected, and now threaten both the biosphere and humanity. There is mounting evidence linking increases in extreme weather frequency and intensity to climate change…

Every effort must be made to reduce emissions and increase removals of atmospheric carbon in order to restore the melting Arctic and end the deadly cycle of damage that the current climate is delivering. Scientists now find that catastrophic climate change could render a significant portion of the Earth uninhabitable consequent to continued high emissions, self-reinforcing climate feedback loops and looming tipping points.

“As we move into 2021 and beyond, we need a massive-scale mobilization to address the climate crisis, including much more progress on the six steps of climate change mitigation,” the five experts argued, detailing various priorities for energy, short-lived pollutants, nature, food, economy, and population.

Echoing messages from the new review, Ripple said in a statement Wednesday that “young people in more than 3,500 locations around the world have organized to push for urgent action… And the Black Lives Matter movement has elevated social injustice and equality to the top of our consciousness.”

“Rapid progress in each of the climate action steps we outline is possible if framed from the outset in the context of climate justice—climate change is a deeply moral issue,” added Ripple, director of the Alliance of World Scientists. “We desperately need those who face the most severe climate risks to help shape the response.”

Alongside the written review, the scientists put out a video about their “six steps”:

Ripple noted that “the year 2020, one of the hottest years on record, also saw extraordinary fire activity in the western United States and Australia, a Siberian heatwave with record high temperatures exceeding 100 degrees within the Arctic circle, an Atlantic hurricane season resulting in more than billion in damages, and deadly floods and landslides in South Asia that displaced more than 12 million people.”

Last year also featured the ongoing coronavirus pandemic, which as of Thursday morning has killed nearly 1.9 million people worldwide. As the pandemic has raged on, experts around the globe have warned that humanity must heal its broken relationship with nature to prevent similar public health crises in the future.

“Lockdowns associated with the pandemic resulted in a decrease in CO2 emissions of 7% in 2020 but this reduction is probably not going to be long-lived because there has been no major concurrent shift in the way we produce energy,” Ripple pointed out. “This drop in emissions is a tiny blip compared to the overall buildup of greenhouse gases, which has resulted in all five of the hottest years on record occurring since 2015.”

Group of scientists in 2020: "We are in a climate emergency." Same scientists in 2021: "We are concerned that no major industrialized country is on track to limit warming to 1.5 degrees C, the target of the Paris Agreement." https://t.co/f7V88EVzWw

Faced with concurrent crises, communities and governments of various sizes around the world have made climate emergency declarations—often as a first step to start taking whatever action they can to limit future emissions and deal with the pollution that’s already driving up temperatures.

“People are frightened—an illustration of that is the more than 1,800 climate emergency declarations issued around the world, by jurisdictions encompassing more than 820 million people,” said Wolf. “We’re at the point of needing a massive-scale mobilization to address the climate crisis.”

“A year ago, we were worried about poor progress on mitigating climate change. Now we are alarmed by the failure of sufficient progress in 2020,” he added. “But aggressive, transformative change, framed against the backdrop of social justice, can ignite an enormous deployment that will let us avert the worst of the climate emergency.”