Climate Change Is a Planetary Emergency — How Can We Avert Disaster? 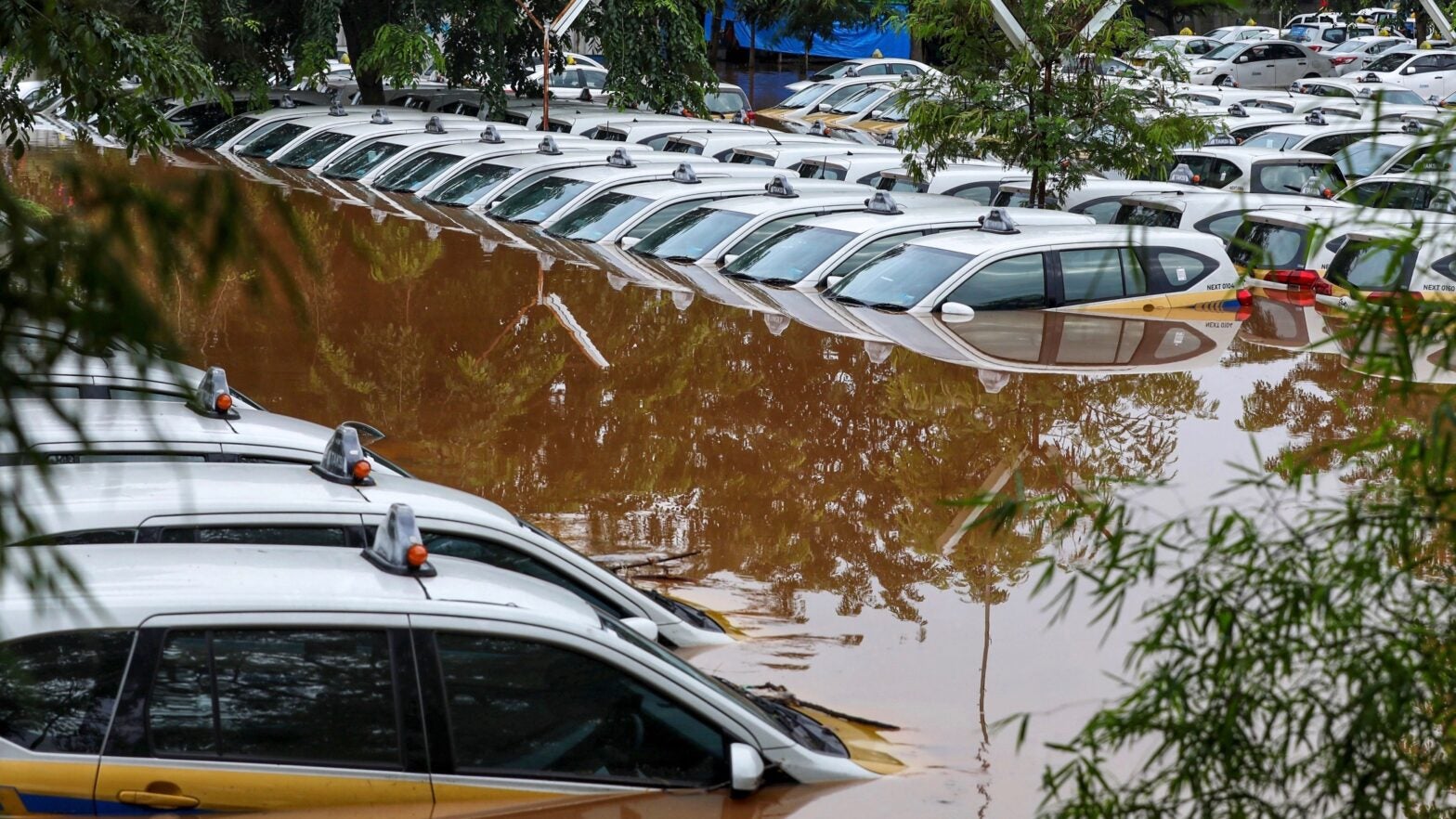 By Sandrine Dixson-Declève
While politics continue to cripple efforts to fight the planetary emergency, the science remains as unequivocal and irrefutable as ever.

We have already crossed a number of ‘tipping points’ in the Earth system; vital thresholds beyond which irreversible and catastrophic consequences for all life on this planet will ensue. The impacts of climate change and ecological destruction are more severe and are manifesting themselves earlier than many scientific predictions in previous decades had foreseen. Without major interventions, the risks will soon reach a critical stage.

For 10,000 years, human civilization has grown and thrived because of the Earth’s remarkable climate stability and rich biological diversity. Astonishingly, every year since the Industrial Revolution, land-based and ocean ecosystems have absorbed close to half of all our emissions from fossil-fuel burning. That’s because the climate, and the natural ecosystems which regulate it and all life on earth, are inextricably linked. In fact, species diversity and ecosystems integrity play a fundamental role in regulating the climate, water cycles, carbon sequestration and food production. Without nature’s ability to absorb and store our GHG emissions, we would have already exceeded 2 C of warming, with potentially disastrous consequences decades ago.

The simple fact is, we don’t know how to reconstruct the cryosphere, the hydrological cycle, the rainforests, coral reefs and other life-support systems on Earth. Once the emergency fully manifests, it will simply be too late to reverse the breakdown. Collapse will cease to be something we can control. Collapse will no longer be a mere hypothetical; it will be a near certainty. Put bluntly, this is the greatest existential risk facing modern human civilization.

It is, without doubt, our patterns of economic growth, development, production and consumption which are pushing the Earth’s life-support systems beyond their natural boundaries. We depend so fundamentally on these ecosystems. And yet it is we who are the very drivers of their demise. It is we who are pushing the systems which support life on Earth beyond their natural boundaries. It is we who are causing severe changes in weather patterns and wreaking untold destruction in the shape of wildfires from the Amazon to Australia, and violent storms from Mozambique to Barbados, to name but a few. And while a great majority of governments and corporations continue to twiddle their thumbs in what amounts to outright denial of the facts, the risks of collapse 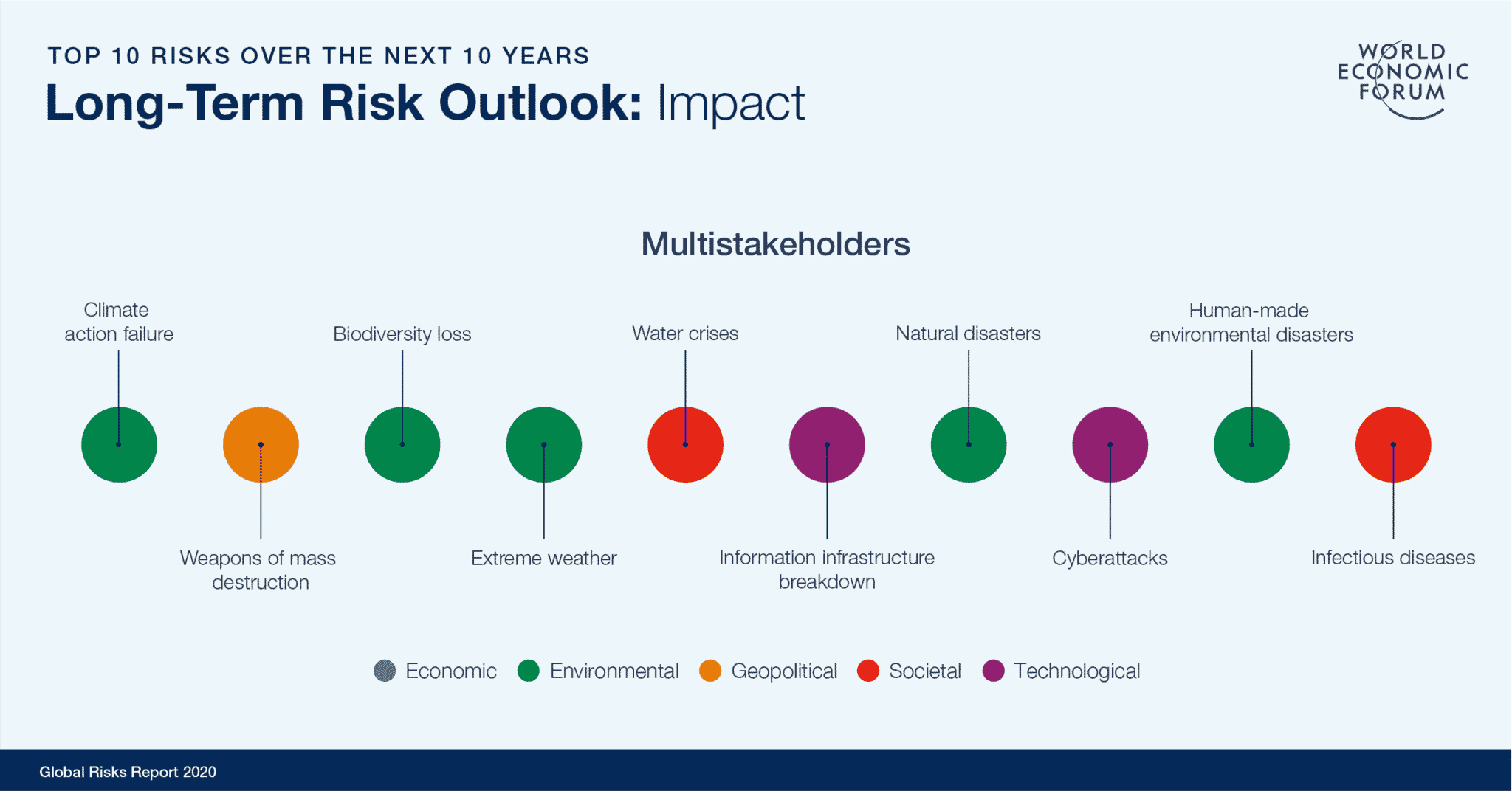 Climate change is a risk to us all. World Economic Forum

It is time for another reality check: our unhealthy consumption and growth habits have not only ‘tipped’ ecosystems but have also created severe ‘socio-economic’ hotspots and greater inequality in both mature and emerging economies. The emergency is not just about ecological breakdown. It is also about societal breakdown and acknowledging that as we urgently address the climate and biodiversity risks, we must simultaneously build new economic, social and financial systems which foster well-being and regeneration rather than unbridled economic growth and consumption at all costs.

Calls for a new growth paradigm and growth indicators were already made in the 1960s by President John F. Kennedy and Senator Robert Kennedy. In 1972, the seminal work by The Club of Rome, The Limits to Growth, laid out the price of progress from socio-economic, financial to environmental tipping points. These are predictions which hold true today.

Governments and businesses around the world habitually set out emergency response plans to protect their economies, jobs, cities and other crucial assets from potential disaster. All leaders must now do the same. They must acknowledge that this is the greatest existential risk facing humanity, while showing that we can emerge from emergency. The Club of Rome’s Planetary Emergency Plan provides a new compass for nations as they navigate through 2020 — a critical year for international policy action with key decisions due on climate change, biodiversity, the oceans, and the SDGs — and beyond.

The Plan calls for the implementation of 10 commitments to safeguard and restore our global commons, from halting the decline of critical land-based and ocean ecosystems to providing financial mechanisms for shifting to regenerative land-use practices and enabling indigenous and local communities to secure their livelihoods. It also highlights the need for a new multilateral Planetary Emergency Fund to rapidly address elements of the crisis, as unavoidable impacts manifest. Crucially, it then outlines 10 key levers of change for transforming energy systems, shifting to a circular economy and guaranteeing a just and equitable society founded in human and ecological well-being.

History has shown humanity to be remarkably resilient. We are well adapted to respond to impending risks through cooperation and innovation. What’s more, the opportunities to not only mitigate risks and avert disaster, but also to rebuild, improve and regenerate are readily available. The Planetary Emergency Plan comes at a crucial moment. A moment when the world can bend the curve, avert the impending disaster and opt instead to embark on the fastest and most exciting social and economic transformation in human history.

Sandrine Dixson-Declève is Co-President of the Club of Rome, a member of the Climate-KIC Advisory Council, and Ambassador for the Energy Transitions Commission (ETC).

The Club of Rome is an organization made up of notable scientists, economists, business leaders, civil society members and public figures, aims to promote understanding of the global challenges facing humanity and to propose solutions through scientific analysis, communication and advocacy.