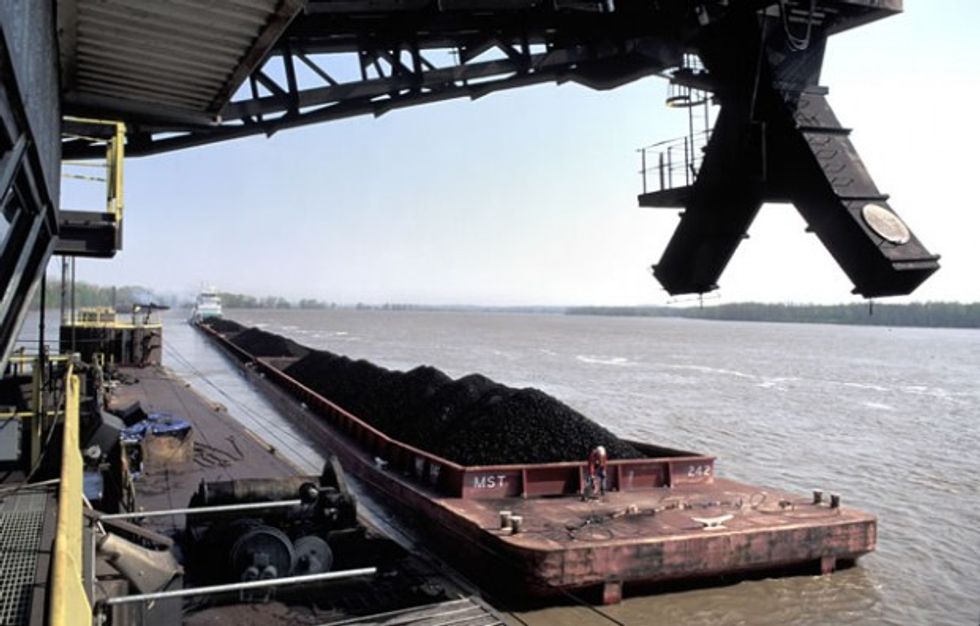 Gov. Quinn, once hailed by the Sierra Club as "the clear choice for Illinois voters who want to move to a clean energy economy and protect our drinking water and wild places," despite the fact that he had received huge contributions from the coal industry, declared:

"Illinois coal is in high demand overseas and we have the resources and infrastructure to take advantage of this opportunity for economic growth," Gov. Quinn said. "Our rail lines and river ports, which we continue to improve under the Illinois Jobs Now! capital construction program, give us a unique export advantage over other states in the region."

Never mind that CO2 emissions will reach an alarming 400 parts-per-million (ppm) for the first time in 3 million years.

Never mind that last year's historic drought and climate destabilization had nearly brought the Mississippi River to a standstill.

Never mind that world coal consumption, thanks in part to U.S. coal exports, will keep coal-fired plants as the lead source of CO2 emissions, according to the U.S. Energy Information Administration.

Never mind that Illinois' own rogue coal industry and state regulatory agencies have failed to protect coal miners, waterways and watersheds, farms and forests, and communities from deadly and costly toxic pollution.

Never mind that the job-robbing union-busting heavily-mechanized economic-diversification-blocking coal industry has left Illinois' historic coal mining counties at the bottom of the charts in entrenched poverty, hopeless unemployment and ruin.

As Illinois Department of Commerce and Economic Opportunity Assistant Director Dan Seals said, "It is truly an unbelievable achievement."

As a historian, I do give Gov. Quinn credit for following in the great tradition of coal exports in Illinois. In 1810, a black slave named Peter Boon shoveled and loaded the outcroppings of coal along the south bank of the Big Muddy River in Jackson County, Illinois. Pushing off toward the Mississippi River in their flatboat, William Boon, a captain in the mounted rangers, and his slave Peter transported the first commercial barge of coal in the heartland.

Despite Peter Boon's presence on the slave schedules, virtually every history book and modern news report of this historic event failed to recognize his enslavement, or the fact that William Boon purchased a "voluntarily indentured" servant as late as 1822. One text geared toward children referred to Peter as Boon's African American friend. As a former lead miner from Kentucky and Missouri, Boon engineered the first commercial slope mine in Illinois.

He and his slave embarked on six epic voyages down the Mississippi to New Orleans, where they were paid in European currency for coal and loads of forest and farm products. Boon's efforts attracted attention. As the first state legislator from southwestern Illinois, he also played a role in shaping the laws that allowed for slave labor to assist his work. He would also set the precedent for the entrepreneurial coal foundations in government office—effectively, the first coal lobby in cahoots with the statewide government.

And the coal ships move on.