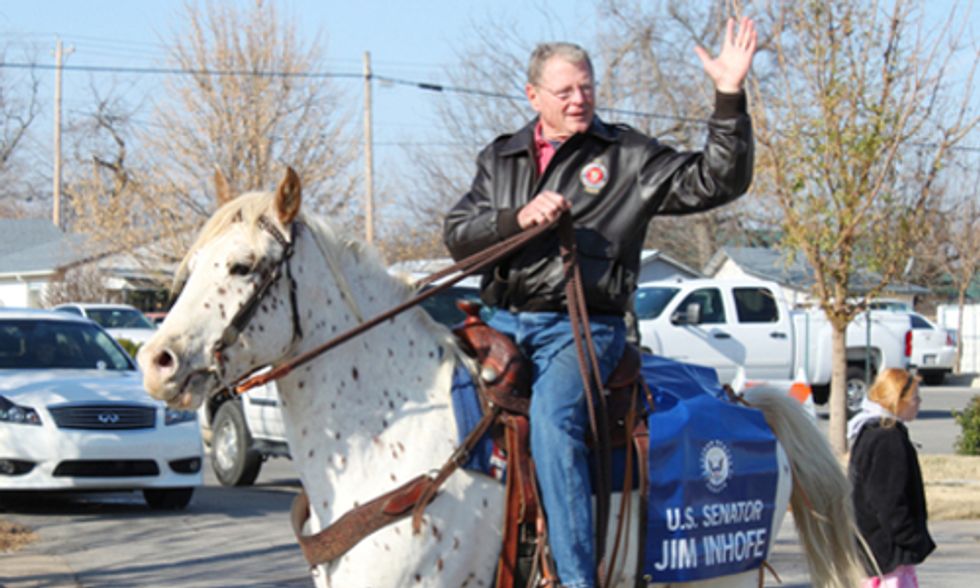 Oklahoma Senator James Inhofe, the author of the 2010 tome The Greatest Hoax: How The Global Warming Conspiracy Threatens Your Future, is in line to become the new chairman of the Senate Environment and Public Works Committee and climate denier-in-chief.

“With all of the hysteria, all of the fear, all of the phony science, could it be that man-made global warming is the greatest hoax ever perpetrated on the American people?" said Inhofe. "It sure sounds like it."

Clearing addressing something he believes is a "hoax" won't be at the top of his to-do list. Crippling the U.S. Environmental Protection Agency (EPA) and its ability to enforce regulations such as the Clean Air and Clean Water acts will be likely priorities, since he has compared the EPA to "Gestapo" and said the movement to address climate change reminds him of the "Third Reich" and the "Big Lie." That's a reference to a term invented by Hitler to describe a lie so extreme that people believe it must be true or no one would say it.

Inhofe's record of trying to block, hamstring or delay messages to address climate change isn't pretty. In 2012, he sponsored a bill to overturn an EPA-issued regulation to cut certain toxic emissions such as mercury from coal-fired plants. It garnered a majority of votes, including several from Democrats, but not the 60 required to pass legislation in the Senate. In September he demanded a delay in action on curbing methane emissions from the oil and natural gas industries, claiming the EPA was using outdated information to implement them and that there needed to be more discussion i.e. more time of doing nothing. In October, he demanded that the EPA refrain from looking into the risks fracking posed to water supplies and what states were doing to handle those risks.

“Genesis 8:22 said that as long as the Earth remains there will be springtime, harvest, cold and heat, winter and summer, day and night," he said. "My point is, God's still up there, and the arrogance of people who think that we, human beings, would be able to change what he is doing in the climate is to me outrageous.”

That's the platform on which he builds a larger argument, accurately described by a commenter at Amazon.com accurately as "Red Scare Meets Green Scare," about political forces trying to use the climate change "hoax" to seize control of the world, take over the U.S. and limit our freedoms. He sees a plot to pretend climate change is happening in order to tie the hands of business and impede economic growth with an endless pile of regulations.

Probably not coincidentally, his biggest campaign donors are the oil and gas industries, which have donated millions of dollar to his campaigns since he entered the U.S. Senate in 1987. Koch Industries, Oklahoma-based oil and natural gas producers Devon Energy, ExxonMobile and Ohio coal company Murray Energy were among his most generous benefactors.

“I expect we are going to see less headline-grabbing efforts on the EPA and more of simply throttling their budget,” Miller told the London Guardian. “If he touches climate denial at all he is going to be ridiculed in public and in the media. If he is smart, he is going to be very quiet publicly, and it will be death by a thousand cuts in the kind of budget battles that people like Jon Stewart don’t pay attention to."

How smart or how restrained he is remains to be seen.