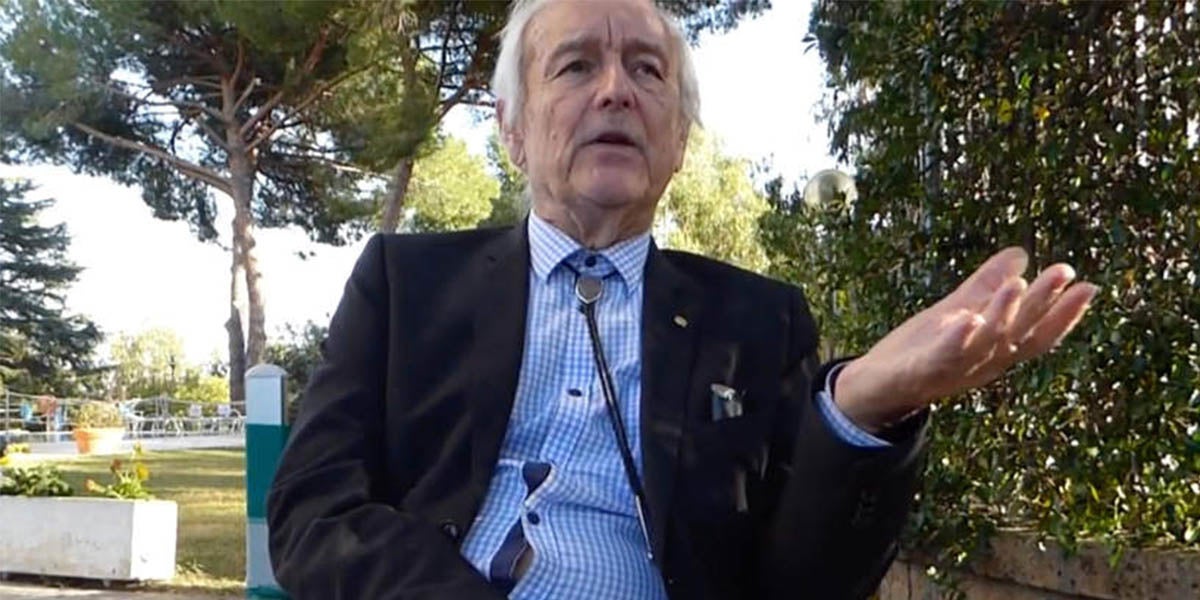 Nils Axel-Morner gives an interview on the fringe of a meeting in Rome in October 2017. YouTube

A climate science denial group with links to President Trump‘s administration has been funding work to sow doubt that low-lying islands in the Pacific are at risk from rising sea levels.

The two researchers being funded—one of which is a well-known climate science denier—have targeted little known “open access” journals with dubious quality controls to get their work published, DeSmog has found.

The CO2 Coalition funded the work and in March 2017 sent well-known climate science denier Nils-Axel Mörner to Fiji with Pamela Matlack-Klein, who has described herself as having a degree from the “Oceanographic Center of Nova Southeastern University, Dania, Florida, in 1983” and writes a weekly newspaper column.

Among the CO2 Coalition’s members is Kathleen Hartnett White—an energy and environment fellow at the Texas Public Policy Foundation who is Trump’s nominee to chair the Council on Environmental Quality, a White House group that helps coordinate environmental policy across the administration.

Trump has renominated Hartnett White, who also rejects any risk of human-caused climate change, after Senate hearings failed to confirm her for the post. Democratic Senator Sheldon Whitehouse has said she is “wildly unqualified” for the role because she “outright rejects basic science.”

"White is a disastrous candidate who will have a profoundly destructive effect on our climate and wildlife if given this job in the Trump administration," said Stephanie Kurose, endangered species policy specialist at @Centerforbiodiv. https://t.co/WpPSqaqvwW

Retired Princeton physics professor William Happer, a director of the CO2 Coalition, was touted as a possible chief science advisor to the Trump White House. Happer also denies that increased levels of CO2 will be a problem for the planet. The CO2 Coalition was caught in a sting by Greenpeace, in which Happer offered to route money from work for a fictitious fossil fuel company through the organization.

Telling Fiji Not to Worry

Mörner has produced at least six journal articles on the back of the Fiji trip, several co-written with Virginia-based researcher Matlack-Klein, and acknowledged the funding of the CO2 Coalition on several occasions. Matlack-Klein’s affiliation is given as the “Portuguese Sea Level Project, Appomattox, Virginia” but DeSmog could find no public record of the project. Klein did not respond to emails.

Mörner used his research to claim that concerns that Fijians had about rising sea levels were misplaced, and used the then-approaching United Nations climate talks hosted by Fiji (but held in Germany) last fall to publicize his work, writing an open letter to the country’s Prime Minister, Frank Bainimarama.

DeSmog sent emails to Mörner, Klein and Happer, who signs the CO2 Coalition’s tax forms, with questions about the research, but received no responses.

One leading Australian scientist, the geophysicist professor Kurt Lambeck, reviewed several of the papers and said in his view, none would have been accepted to a recognized scientific journal with solid peer-review procedures.

Mörner has been targeting fringe journals with official-sounding names but highly questionable quality controls, in order to publish the papers.

All the journals are “open access,” which means the scientists pay for their work to be published and the results are available to the public for free.

In October 2017, Mörner presented his findings alongside Matlack-Klein, at a climate meeting in Rome which, as DeSmog revealed, was hijacked by Mörner, who was on the organizing committee, and who listed several climate science deniers as speakers.

Kurt Lambeck, professor of Geophysics at the Australian National University, said all of the papers had appeared in journals “of little academic standing” and that “none would have passed the reviewing process for more reputable journals.”

He said that two papers which appeared in journals published by a company called “Scientific Research Publishing” were “trivial” and added “no insight into either the evidence for sea-level change nor on coastal erosion processes” beyond what was already well known.

He said: “It is well understood that human influences are one of the most important contributors to changes in coastal erosion and does not need restatement in a scientific paper.”

A third paper was published in a little-known online journal with the title International Journal of Earth & Environmental Sciences. Lambeck said this paper should have been “rejected out of hand” because Mörner had presented no evidence to back up his claim.

In the paper Mörner argued that ocean levels were being driven by changes in solar winds that changed the rotation of the earth, causing ocean masses to shift towards or away from the poles depending on conditions on the sun. This, Mörner claimed, was the likely explanation for ocean levels around Fiji for 500 years.

Lambeck said he first heard Mörner make this general argument in 1979 during a symposium presentation where it was pointed out to him that the impacts of his proposed mechanisms were “improbable” but, even if they were present, were “orders of magnitude too small” to be effective on sea levels.

Lambeck said that significantly, in order for Mörner to make his arguments about changing sea levels, he had ignored other well-known research in respected journals. In particular, Mörner overlooked the findings that major changes in sea level had historically been driven by melting ice sheets and glaciers and also, in more recent times, by thermal expansion of the oceans.

A fourth paper reads more like an angry email to a colleague than a scientific journal article. It starts with a reference to a story in “The Mail” that Mörner claimed had shown that global temperature records held by the National Oceanic and Atmospheric Administration (NOAA) were being manipulated to show global temperatures were rising.

Mörner is referring to claims supposedly made by a former NOAA employee, John Bates, and reported in the Daily Mail. Mörner does not refer to the many scientists who dismissed the claims of fraud—including Bates himself. He also ignores how the Independent Press Standards Organization ruled that the Daily Mail had “failed to take care over the accuracy of the article” and “had then failed to correct these significantly misleading statements,” a ruling which resulted in a 659-word correction to the article.

In this paper Mörner goes on to claim that sea level records derived from satellite measurement are also being nefariously and unethically manipulated, but offers no evidence.

Lambeck said that in this paper, Mörner quotes mainly from his own writings and ignores other multiple technical analyses that have carefully considered how issues with satellite and tide gauge measurements have been identified and checked. He also ignores the specific rebuttals by recognized experts in the field, refuting the very conclusions he had made.

“To simply compare the globally average trend with a few short tide gauge records is something that no reasonable person would consider,” Lambeck said.

Lambeck concluded that Mörner was “not handicapped by knowledge of physical processes, not interested in testing his hypotheses even by simple order of magnitude calculations, nor in trying to understand what others may have written.”

Many journals are based in either China or India and have names that resemble other, more legitimate journals.

Some people have characterized these journals as “predatory” due to the fees involved, in return for copy-editing services that are of questionable quality and, judging from the quality of some of the work which appears, a peer-review system that exists in name only.

Academics submitting research to these journals have to pay a fee for them to appear, creating a potential conflict where the publisher earns more cash when they encourage more researchers to publish.

This has seen journals spamming researchers around the world, encouraging them to submit articles, join editorial boards, or speak and attend conferences.

To avoid academics being caught out, many organizations have issued guidelines to members, such as the Council of Science Editors, The Royal Society of New Zealand, the World Association of Medical Editors and the International Committee of Medical Journal Editors.

In addition, academics have reported being named on editorial boards without their knowledge. One major publisher, OMICS International, based in Hyderabad, India, claims to run more than 700 peer-reviewed journals.

Mörner targeted five publishers for his work on the “Fiji New Sea Level Project,” which he wrote was “supported by a kind grant from the CO2 Coalition.”

The International Journal of Engineering Science and Invention offers to publish papers for just $75. The journal has no contact address, but is published by “Invention Journals” and has a Gmail address as a contact. The journal’s website and the publisher’s website were registered by a “Chetan Sharma” in Uttar Pradesh, India.

One Mörner paper, repeating identical arguments and observations from other papers, appeared in the Journal of Aquaculture & Marine Biology, published by MedCrave Group.

One MedCrave journal—Urology & Nephrology Open Access Journal—was exposed in a sting operation in April 2017, when an editor wrote a fake case report based on an episode of Seinfeld using the name of a character that appeared in the TV show. The paper was accepted and published by the journal, but was later removed.

Juniper Publishing Group, which published another of Mörner’s Fiji papers, lists a residential property in Simi Valley, California, as its contact address. The website was registered using a privacy service, concealing the name of the website creator. Beall has described Juniper as “rotten to the core” and a publisher “to be avoided by all researchers.”

Juniper was caught in another hoax, this time from Australian public health professor Mike Daube who created a fake academic profile based on the credentials of his pet dog and an affiliation with a fake veterinary school. Juniper’s “Global Journal of Addiction and Rehabilitation Medicine” was one journal to accept “Dr. Olivia Doll” as a member of its editorial board.

Daube provided a picture of “Dr. Doll” to the journals—an image of Australian pop star Kylie Minogue. On its website, Juniper says, “Juniper publishers have been established with the aim of spreading quality scientific information to the research community throughout the universe.”

Another journal targeted by Mörner was the International Journal of Earth & Environmental Sciences, published by Graphy Publications, which gives an address in Bangalore, India, as a contact.

A barely legible webpage describing the journal’s aims says, “We encourage authors, who always have shown more interest to publish his work in the prestigious journals, and avail them the freely to the scientific community.”

Both Mörner and Matlack-Klein gave presentations to a conference for climate science deniers held in London in 2016 which was organized by the so-called Independent Committee on Geoethics (a group apparently set up to investigate climate scientists for fraud).

Mörner was a founder of that group, which includes as members two other Australia-based climate science deniers who reject the evidence of rising sea levels and have similarly targeted obscure journals with their work.