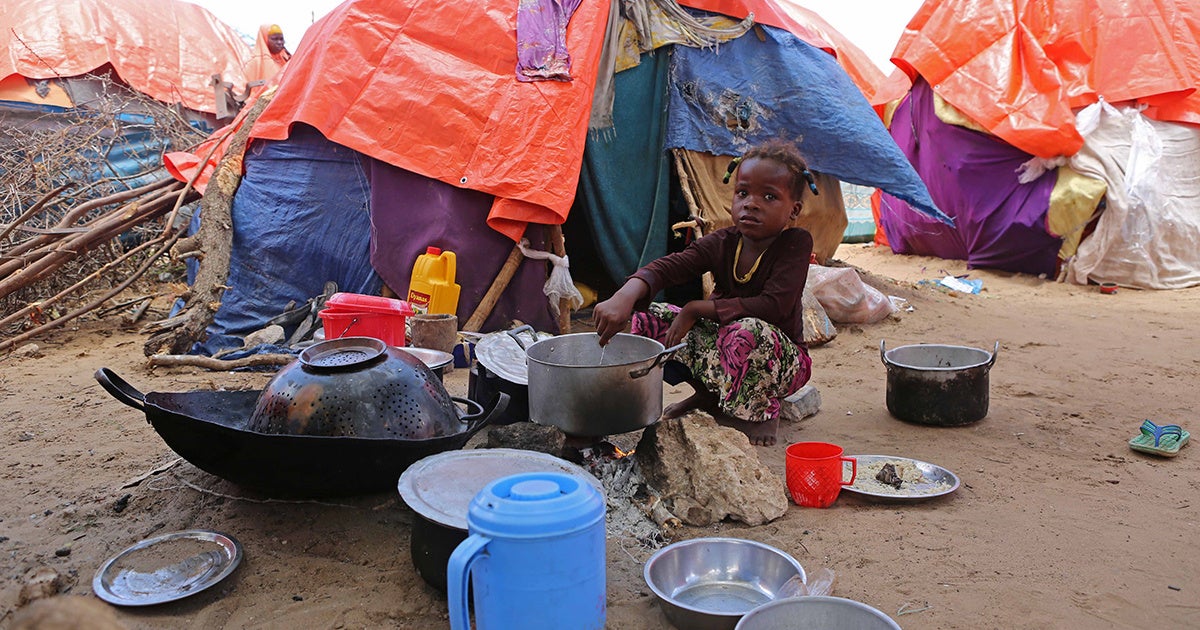 Somalians fight against hunger and lack of water due to drought as Turkish Ambassador to Somalia, Olgan Bekar (not seen) visits the a camp near the Mogadishu's rural side in Somalia on March 25, 2017. Sadak Mohamed / Anadolu Agency / Getty Images

World hunger is on the rise for the third consecutive year after decades of decline, a new United Nations (UN) report says. The climate crisis ranks alongside conflict as the top cause of food shortages that force more than 821 million people worldwide to experience chronic hunger. That number includes more than 150 million children whose growth is stunted due to a lack of food.

The UN’s Sustainable Development Goals of eradicating hunger and all forms of malnutrition faces growing roadblocks as the climate crisis worsens and triggers conflicts over resource management. In fact, the report calls the ambitious target an “immense challenge,” as the number of hungry people rose by 10 million in the last year.

“We will not achieve zero hunger by 2030,” said David Beasley, head of the World Food Program, one of the UN agencies contributing to the report, as Channel News Asia reported. “That’s a bad trend. Without food security we will never have peace and stability.”

Beasley also criticized the media’s obsession with Brexit and Donald Trump, rather than using its influence to highlight children dying of hunger. He went on to warn that extremist groups will weaponize food supplies, using it to recruit new members and divide communities, according to Channel News Asia.

“Climate change is having far-reaching effects on agricultural productivity and food security,” William Lacy Swing, the UN Migration Director General, in a statement. “It is among the main reasons for the record numbers of people compelled to migrate from rural areas to towns and cities around the world.”

This year has seen food stocks drop from flooding, early and high heat near the arctic and tropical storms.

In Zimbabwe, for example, an already suffering economy is starting to shrink from sustained and drought and from a devastating cyclone.

“Fuel remains difficult to access,” said Nathan Hayes of the Economist Intelligence Unit analysis agency, as Deutsche Welle reported. “There are major shortages of bread, as domestic maize production has been decimated and the country cannot afford to pay for imports.”

Drought also has Kenya in the crosshairs of food insecurity. “The long rain season is normally from March till end of May,” said Peter Abiya Ochola of the National Drought Management Authority in Kenya. “This year, for example we had very poor rain season. It started late in April and lasted just three weeks with some little rain showers.”

Drought years are increasingly common in Kenya, happening once every two or three years, as opposed to the more normal every five years, said Ochola. He estimated that 1.5 million people in Kenya are affected by this year’s drought — particularly farmers whose fields or livestock depend on rain.

“The impact on food security is bad,” said Ochola, as Deutsche Welle reported.

While the drift towards increasing global hunger is disturbing, the UN report remains optimistic that zero hunger is still achievable with the right political commitments, bolder action and intelligent investments.

“Our actions to tackle these troubling trends will have to be bolder, not only in scale but also in terms of multisectoral collaboration,” the heads of the UN Food and Agriculture Organization (FAO), the International Fund for Agricultural Development (IFAD), the UN Children’s Fund (UNICEF), the World Food Program (WFP) and the World Health Organization (WHO) urged in their joint foreword to the report, according to a UN Climate Change statement.