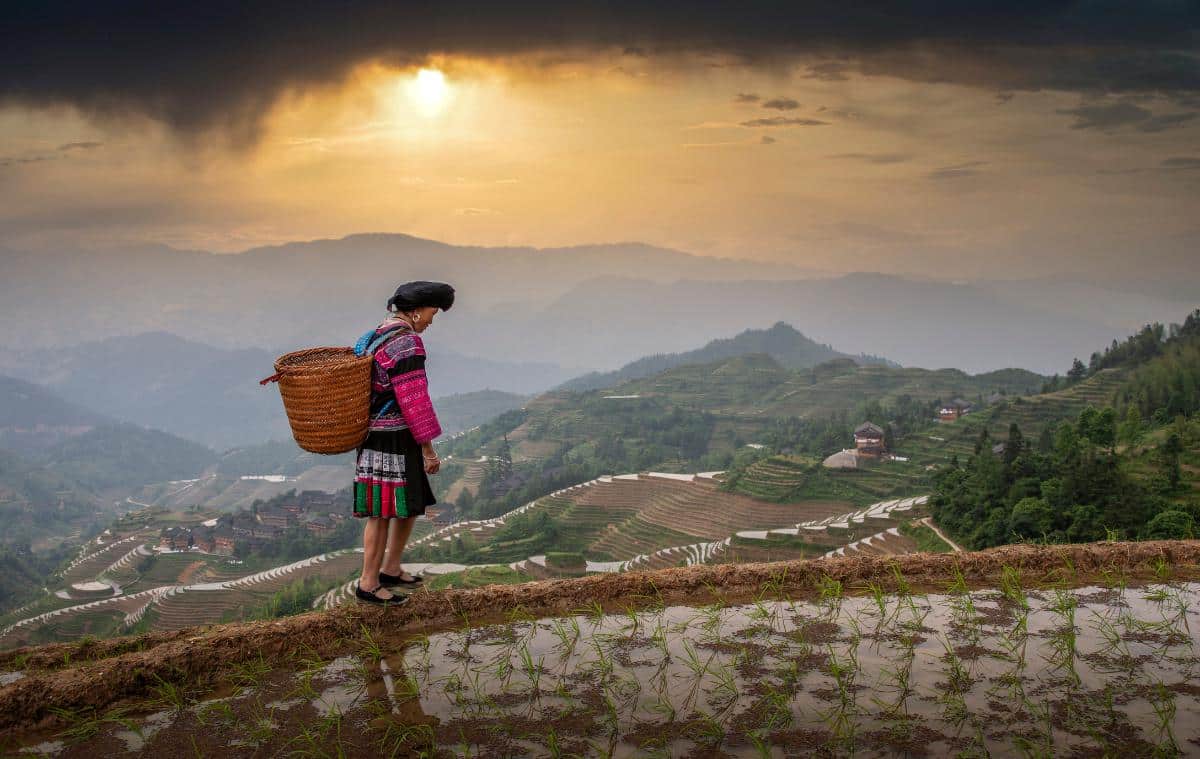 A Yao woman walks on the edge of a rice field in the Longji rice terraces in Longsheng, Guangxi, China. Buena Vista Images / Photodisc / Getty Images

Lives around the world are threatened by the climate crisis, but some suffer its effects much more than others.

For example, it is well documented that women are disproportionately impacted by climate change. A 2016 report by the United Nations found that women in China, who make up 70 percent of the agricultural workforce, will suffer from environmental change more than men in the country because of fewer employment opportunities and access to income options, Global Citizen reported.

As the gender divide grows more severe as a result of climate change, tracking the progress of sustainable development is increasingly important. But current tracking methods to assess this progress are generally limited to economic terms and monetary values, according to a recent paper published in Proceedings of the National Academy of Sciences.

YoGL will track overall well-being to assess the success of sustainable development projects and create a form of global “currency” to measure how certain development options are useful for a broad range of populations, beyond just monetary value, the IIASA added.

“Life expectancy has long been used as a very comprehensive indicator of human development, with avoiding premature death being a universally shared aspiration. However, mere survival is not enough to enjoy life and its qualities,” Wolfgang Lutz, founding director of the Wittgenstein Centre for Demography and Global Human Capital, told the IIASA.

“The Years of Good Life indicator only counts a year as a good year if individuals are simultaneously not living in absolute poverty, free from cognitive and physical limitations, and report to be generally satisfied with their lives.”

Researchers say the YoGL tracker can “assess long-term human well-being as the ultimate end of sustainable development.” This includes considering the impacts of environmental change, such as climate change and loss of biodiversity, on human well-being.

“If we used YoGL as a currency to measure the long-term impacts of the ongoing crisis rather than GDP per capita or life expectancy, we would not only account for the material losses and the lost life years, but also for the losses in physical and cognitive wellbeing,” study coauthor Erich Striessnig added, according to the IIASA.

The tracker could also assess which sustainable development methods work and pinpoint where solutions may be needed the most.

Although women are generally expected to live longer lives than men, their YoGL are lower in most developing countries, exposing a gender divide in these countries, according to the IIASA.

For the future, improved data availability is needed for the YoGL tracker to inform decisions on sustainable development, especially in places where there is “a significant gender inequality in objective living conditions and subjective life satisfaction,” the authors wrote.

“Climate change is an existential threat to all of humanity, but not equally. Because gender inequalities are compounded by racial injustice, climate impacts are even more pronounced for Indigenous women and women from low-income communities and communities of color.”

Although women bear the brunt of the climate crisis, they are also often the ones leading the way in developing solutions. For example, Verveer and Smith cite a study that found more elected female leadership leads to more stringent climate policy. “We cannot effectively address the existential threat of climate change, neither at home nor abroad, without the full and meaningful participation of women,” they added.