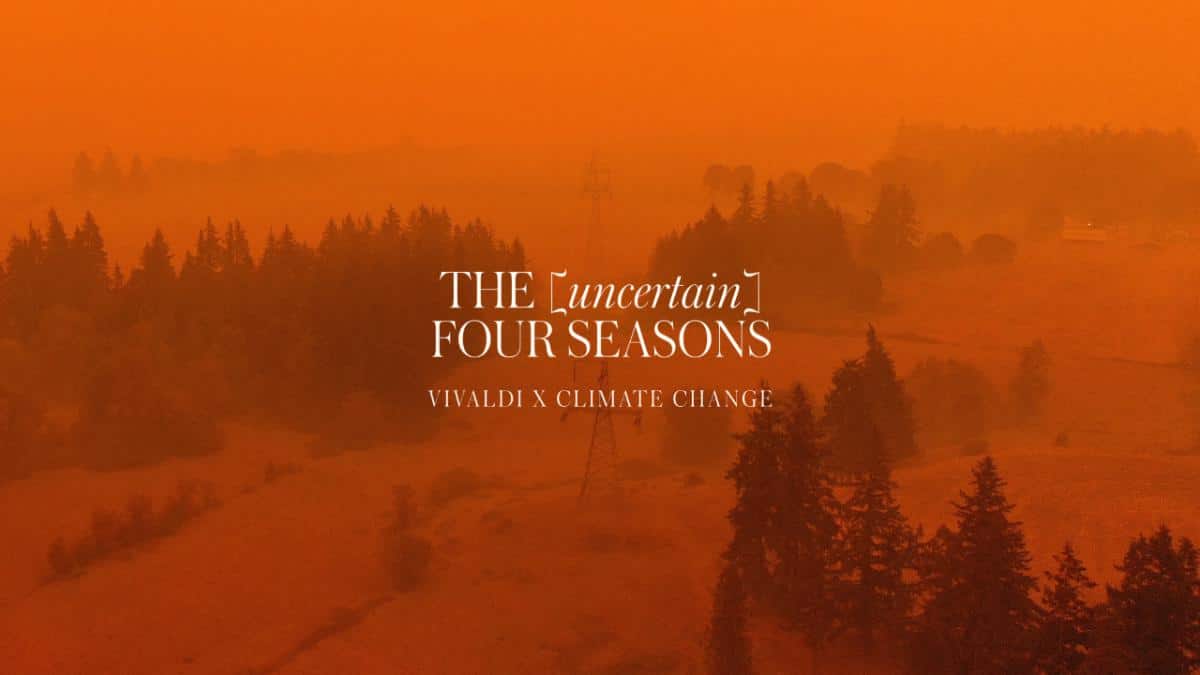 "The [Uncertain] Four Seasons" warns of a world consumed by the climate crisis. AKQA

Three hundred years ago in 1723, Antonio Vivaldi composed “The Four Seasons,” a series of violin concertos inspired by the natural world. Now, scientists, composers and designers have reimagined the classic to help envision what the future might feel like in 2050 — a world forever changed by the climate crisis.

Tim Devine, executive creative director of AKQA, the design firm that masterminded the project, told EcoWatch, “On the surface, the original Four Seasons is about weather and seasonal variation, but it is very much about our human relationship to the world. That’s what makes it a great fit for the narratives that climate science tells us the future could be like.”

The collaborators on the updated Vivaldi score used algorithms to predict specific impacts of global warming in 2050, and to interpret those changes in sonic terms. The result is “The [Uncertain] Four Seasons.” In it, they explored how to “derive a lived experience of climate science predictions for RCP 8.5 in 2050,” Devine explained. (RCP 8.5 is an emissions scenario for global warming.)

Hugh Crosthwaite, the composer of the piece, told EcoWatch, “The data tells us things are looking grim. Without urgent and profound action, the world will be absolutely and starkly diminished.”

According to the United Nations (UN), “No corner of the globe is immune from the devastating consequences of climate change.” These include environmental degradation, mass extinctions, natural disasters, extreme weather, Arctic melting, sea-level rise, acidifying and warming oceans and wildfires. The human impact will range from food and water insecurity to economic disruption, conflict and terrorism, the UN warned. 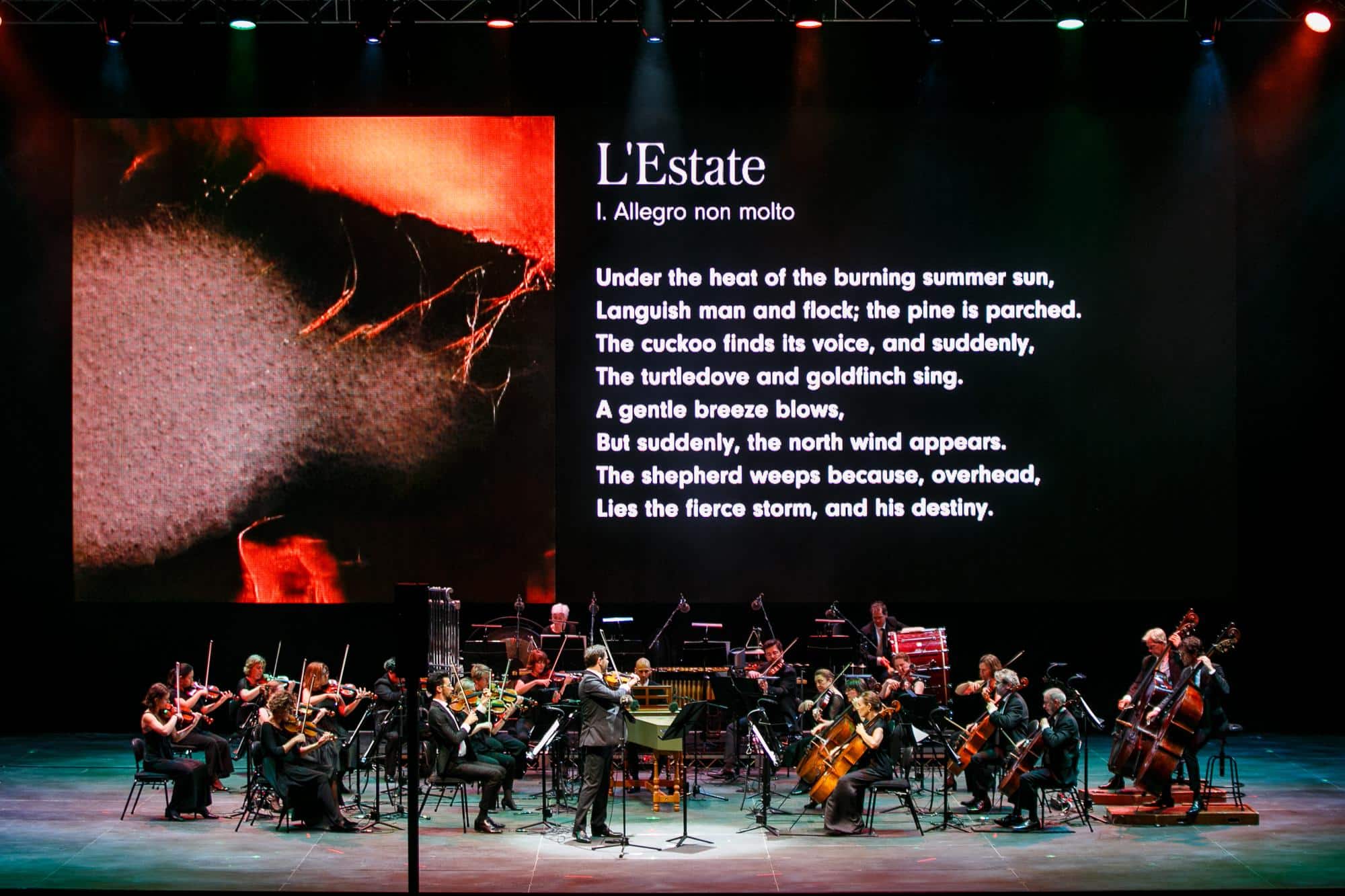 Because climate change will have disparate effects around the globe, the team also created roughly 1,000 unique scores, personalized for every major orchestra on the planet. These are based on regional weather models, geospatial datasets and UN IPCC reports on climate change. For example, in Shanghai, which is predicted to be underwater by 2050, the concerto is full of rests and silence.

By comparing the human experience of each season in the future with Vivaldi’s depictions, the team created a dire warning of what’s to come. For example, Vivaldi’s original included birdsong to represent spring, along with other elements that represented each of the seasons he appreciated. In almost satiric parallel, the updated version has removed birdsong notes based on data about declining bird populations and species collapse. “The more at risk a place is the greater the reduction of notes,” Devine told EcoWatch.

“[A]t first, the storms sound intense, but with further repetition, their intensity normalizes and they lose their initial jolt,” Devine said. This mimics how extreme weather has already become more frequent

.Devine told Yale Climate Connections, “We really wanted to walk that line between being too ridiculously catastrophic and kind of meaningfully changing this to make it sound what we think it might feel like to live in that time.”

“For me, the whole of the works is greater than the sum of the individual changes,” explained Crosthwaite. “This is important to me because it will be the whole of the changes [due to the climate crisis] that we will experience and future generations will be forced to endure.” 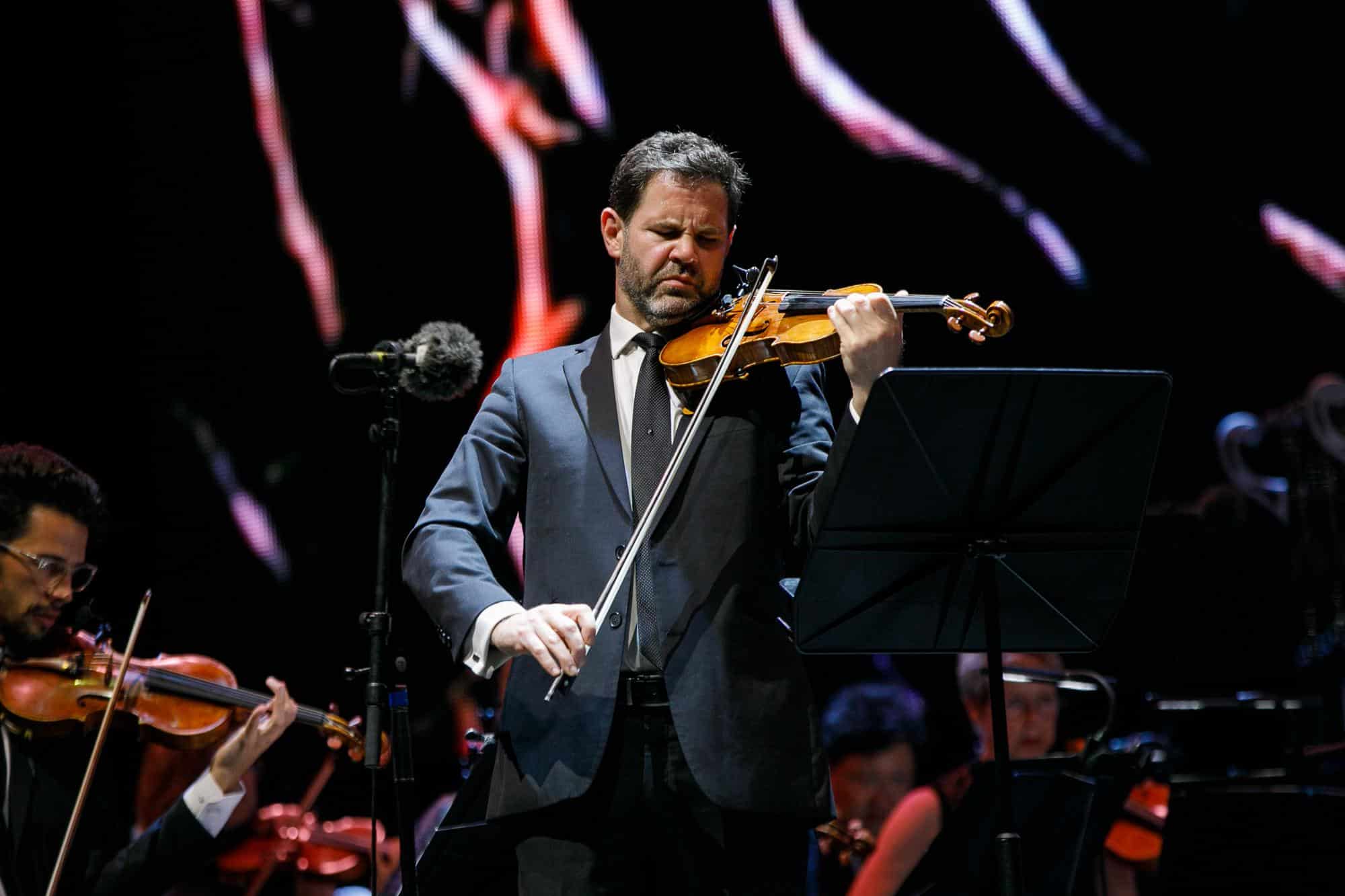 Music turned out to be a perfect medium for the two to share their climate message because it’s “a very human thing,” according to Devine. It can breathe life into stark climate data and facts. As a composer, Crosthwaite uses music to conjure a wide range of feelings and ideas. He said of the sonnets, “I feel they really capture, directly, the impact of climate science through art. We have created a modern lens through which to see Vivaldi’s world and the impact of climate change.”

For listeners, the familiar-but-unsettling tune serves as a warning about how the world could feel if nothing is done to prevent the worst-case scenario. Crosthwaite hopes that his audiences will leave with a profound emotional experience that motivates urgent climate action.

AKQA exists “to create a better future,” Devine said. The company has worked on several projects to further the collective understanding of climate change, and how to change and reframe human behaviors. In particular, “The [Uncertain] Four Seasons” is aimed at COP26 and getting more leaders to sign the Leaders’ Pledge for Nature, Devine explained.

Devine concluded, “The challenge is not awareness of climate change. We’re all aware of the science. The challenge is action. What are we doing? What are our governments and businesses doing? The [Uncertain] Four Seasons is a creative act, a response to the science. Its intention is to create more noise in communities around the world so that their local and national leaders feel more responsibility to act. COP26 is that opportunity.”