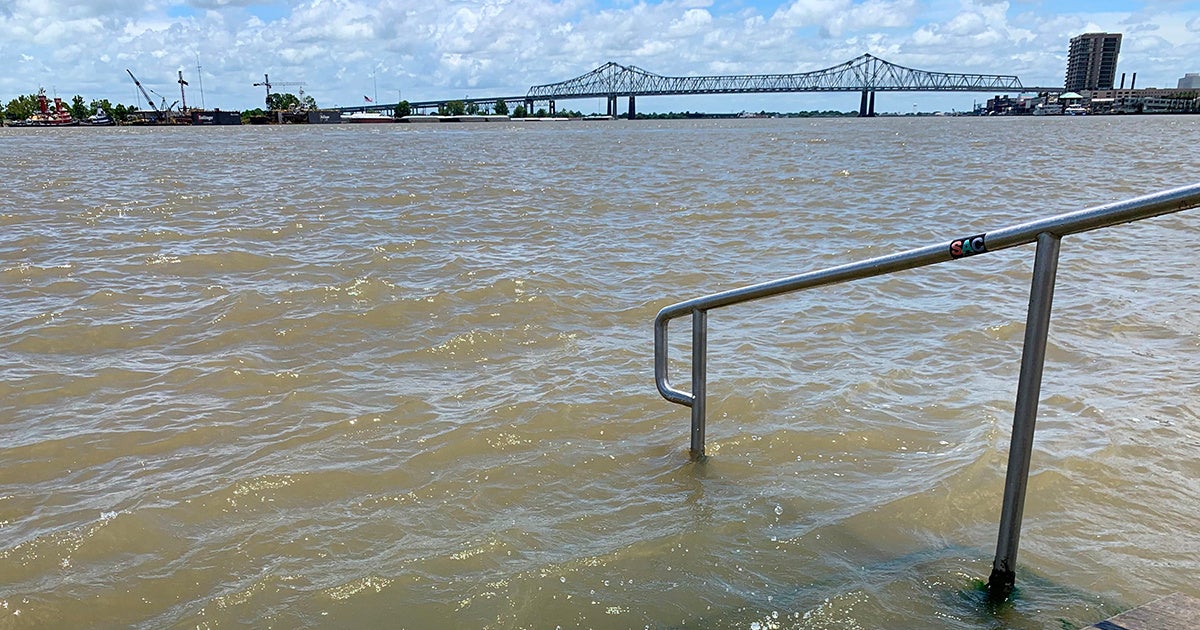 The Mississippi River laps at the stairs on a protective levee in New Orleans as tropical storm Barry approaches on July 11. MICHAEL MATHES / AFP / Getty Images

As Hurricane Barry trudges towards New Orleans, it’s not the gale force winds grabbing the public spotlight. It’s the rain, a byproduct of man-made climate change, according to a paper published in the journal Nature.

A tremendous amount of rain — 10 to 20 inches — is expected to fall from Thursday night to Saturday. That’s on the heels of a tropical rainstorm that dropped seven inches of rain on Wednesday. Usually New Orleans gets six inches of rain in July, according to the New York Times.

Barry’s rainfall is no longer an outlier, but a symptom of climate change. The research paper found that climate change intensified the rains of three major hurricanes that made landfall in the U.S. — Katrina, Irma and Maria — by 4 to 9 percent. The scientists also predicted that future warming could increase rainfall totals for the most extreme hurricanes and tropical cyclones by up to 30 percent, as PBS reported.

“Climate change is in general increasing the frequency and intensity of heavy rainfall storms,” said Andreas Prein, a project scientist with the National Center for Atmospheric Research who was not involved with the study, as the New York Times reported.

Another scientific analysis, published in the journal Earth’s Future, looked at Hurricane Harvey, which dumped an unprecedented 60 inches of rain on Houston. The authors of that study wrote, “[R]ecord high ocean heat values not only increased the fuel available to sustain and intensify Harvey but also increased its flooding rains on land. Harvey could not have produced so much rain without human‐induced climate change.”

“If you look at the records, mostly it’s the water that kills most people,” Dr. Prein said to the New York Times.

The numbers show that the record rainfalls are producing flooding that is far more lethal than winds. Rain-induced flooding caused nearly 75 percent of the 162 fatalities in hurricanes and other tropical cyclones in the U.S. from 2016 to 2018, as the Sun-Sentinel in Fort Lauderdale reported. Most victims drowned near their vehicles, according to the National Hurricane Center.

That number excludes Hurricane Maria, which dropped a tremendous amount of rain on Puerto Rico. The death toll there and the causes were too difficult to calculate.

“I think we’re at the beginnings of the new normal,” said Ben Kirtman, director of the Center for Computational Science Climate and Environmental Hazards Program at the University of Miami’s Rosenstiel School for Marine and Atmospheric Science, as the Sun-Sentinel reported.

“It’s pretty simple. A warmer atmosphere holds more water vapor. And so when it comes time to condense all that water vapor and produce rainfall, there’s more water vapor available. The second element is the engine for tropical storms; the energy source for that engine is warm ocean surface temperatures, and those have risen. As the climate system warms, the ocean warms. That means there’s more fuel for these hurricanes, which can lead to enhanced rainfall.”

Hurricane Barry’s rainfall is happening at a particularly perilous time for the region after an extremely wet spring caused the region’s rivers to swell. That has experts and residents concerned that the storm will overtop levees in New Orleans.

The flooding of the Mississippi River has left very little room for additional water, raising concern that the storm surge will inhibit river water from flowing out to sea.

“The ingredients are there for a real catastrophe if the flood control infrastructure simply gets overwhelmed,” said David Gochis, a hydrometerological scientist at the National Center for Atmospheric Research, as the New York Times reported.