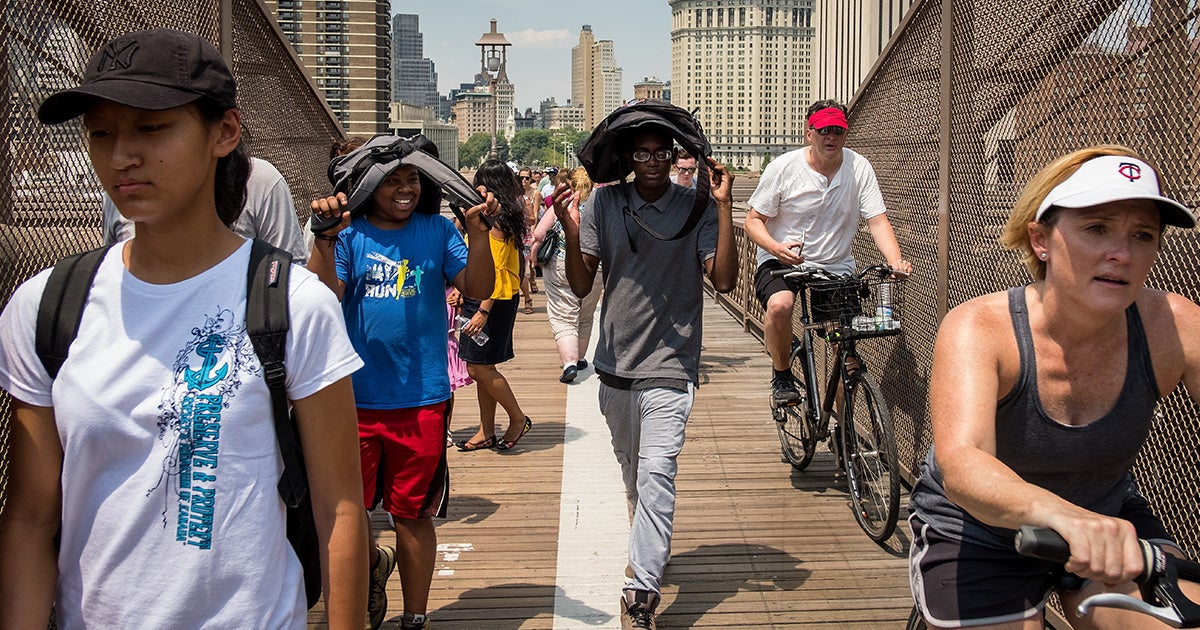 People crossing the Brooklyn Bridge on July 20, 2017 in New York City sought to shield themselves from the sun as the temperature reached 93 degrees. Drew Angerer / Getty Images

Taking action to stop the mercury from rising is a matter of life and death in the U.S., according to a new study published in the journal Science Advances.

Extreme heat due to the climate crisis will cause thousands of deaths around the country unless immediate action is taken to stop global temperatures from rising over 1.5 degrees Celsius, or 2.7 degrees Fahrenheit. Already this month, San Francisco, typically cool in June, has seen triple digit temperatures, as the San Francisco Chronicle reported. And meanwhile, parts of India have seen scores of heat-related deaths from temperatures sizzling around 122 degrees Fahrenheit, according to CNN.

By examining the effects extreme heat will cause in 15 U.S. cities, the study shows the pressing need for immediate action for nations around the world to ratchet up their efforts to contain global warming to 1.5 degrees Celsius above pre-industrial levels.

“Our results demonstrate that strengthened mitigation ambition would result in substantial benefits to public health in the United States,” the study’s authors concluded.

In the absence of those efforts, the outlook is bleak. If the global average temperature rises 3 degrees Celsius, or 5.4 degrees Fahrenheit, above pre-industrial levels, a heat wave could claim 6,000 lives in New York City, 2,500 in Los Angeles and 2,300 in Miami, the study says, as NBC News reports. The greatest risks are in northern cities like New York, Boston and Philadelphia.

That also means a densely-populated and vulnerable city like New York has the most to gain from meeting the 2 degree Celsius rise laid out in the Paris agreement, and even more to gain if temperatures rise only 1.5 degrees.

“New York City … could see 1,980 1-in-30-year heat-related deaths avoided in the 2C warmer world relative to the 3C warmer world under the assumption of constant population. If the 1.5C world is realized, 2,716 of 1-in-30-year heat-related deaths could be avoided, relative to 3C,” according to the paper, as Carbon Brief reported.

In the gravest scenario where temperatures rise 3 degree Celsius, Seattle, known for its cool summer temperatures, could see over 700 heat-related deaths while daily temperatures hover around 97.5 degrees Fahrenheit, the Seattle Times reports. That’s just heat-related and doesn’t factor in the decline in air quality that Seattle has seen thanks to nearby wildfires. Not to mention, as stark as the numbers are, the study might have underestimated the toll taken by heat waves by failing to consider non-fatal heat-related injuries, which send patients to American emergency rooms about 65,000 times each summer, said Aaron Bernstein, co-director of the Center for Health and the Global Environment at Harvard’s T.H. Chan School of Public Health, to NBC News.

The study authors’ hope that putting the numbers in context on a city-by-city basis will trigger leaders to reassess and ramp up their commitment to reducing greenhouse gases.

“You might think, what’s the difference 1.5 degrees will make to human lives?” said Eunice Lo, a climate scientist at the University of Bristol and the paper’s co-author, as reported by NBC News. “Actually, thousands of lives in one year can be saved in a city. Meeting the 1.5-degree target is essential and would be substantially beneficial to public health in the United States.”