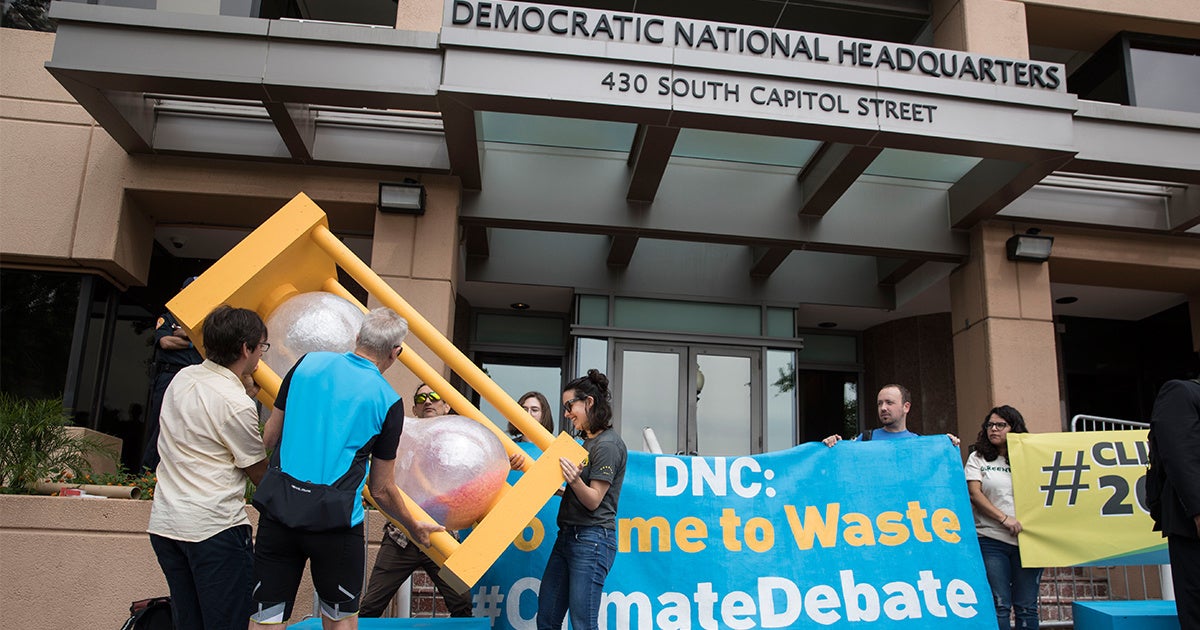 A Greenpeace rally to call for a presidential climate debate, in front of the DNC headquarters in Washington, DC on June 12. Sarah Silbiger / Getty Images

Confronting the climate crisis is the No. 1 issue for 96 percent of Democratic voters, but it clocked only around seven minutes of airtime at the first Democratic Presidential debate Wednesday, Vox reported.

The small amount of time spent on climate change, and the fact that the first climate-centered questions came an hour and 22 minutes into the debate itself, as the Huffington Post reported, emphasized the need for a debate exclusively dedicated to the issue, something the Democratic National Committee (DNC) has so far refused.

“It’s absurd to host a debate in Miami — a city where millions of people could lose their homes due to sea level rise that’s also only 20 miles from the Everglades where massive fires are out of control — and spend only a few minutes on the climate crisis,” Sunrise Movement Executive Director Varshini Prakash said in a post-debate statement. “Only four candidates had the opportunity to discuss it at all. This is downright irresponsible and shameful.”

The group has been camping out in front of DNC headquarters since Tuesday to demand a climate debate. Climate-focused candidate Washington Governor Jay Inslee also repeated his call for a debate centered on the issue.

“It is clear that this deserves more debate and a much more intensive focus,” Inslee told the Huffington Post. “And we do need a separate debate.”

So what did the candidates get a chance to say about the issue?

Massachusetts Senator Elizabeth Warren mentioned it in her opening remarks, as the Huffington Post reported, when she said that the economy was “doing great for giant oil companies that want to drill everywhere, just not for the rest of us who are watching climate change bear down upon us.”

She also answered an economy-focused question by mentioning a “worldwide need for green technology,” according to The New Republic.

Hawaii Representative Tulsi Gabbard mentioned the importance of environmental protection, and Inslee answered a jobs question with his trillion plan to cut most emissions by 2030, as the Huffington Post reported.

“The next thing I’ll do is put people to work in the jobs of the present and the future,” Inslee said. “Donald Trump is simply wrong. He says wind turbines cause cancer. We know they cause jobs.”

The first actual question on the issue came three-quarters into the debate from moderator Rachel Maddow and focused on the debate’s host city of Miami.

“We are here in Miami experiencing serious flooding on sunny days as a result of sea level rise and parts of Miami Beach and the Keys could be underwater in our lifetimes. Does your plan save Miami?” Maddow asked Inslee, as Vox reported.

Inslee responded with his plan to end the Senate filibuster so that climate legislation could actually pass the chamber.

Former Texas Representative Beto O’Rourke spoke about how to balance fighting climate change with respecting people’s desire not to be ordered around by the government.

“You have to bring everybody into the challenges we face,” he said, according to Vox. “That’s why we are traveling everywhere, listening to everyone.”

Former Housing and Urban Development Secretary Julián Castro was asked who should provide funds for people whose homes are impacted by extreme weather events, but Castro objected to the question’s framing, arguing that the focus should be on rebuilding resilient communities.

Ohio Representative Tim Ryan was asked how to fund climate policy if a carbon tax was not politically possible, and emphasized the importance of economic growth.

Overall, the issue got more focus than it had in the entire 2016 debate cycle between Trump and Hilary Clinton, but not enough time to really compare the candidates’ stances, Vox concluded.

Wednesday’s debate featured 10 of more than 20 candidates vying for the Democratic nomination, CNN reported. A second slate of candidates, including overall front-runner and former Vice President Joe Biden, will face off Thursday.