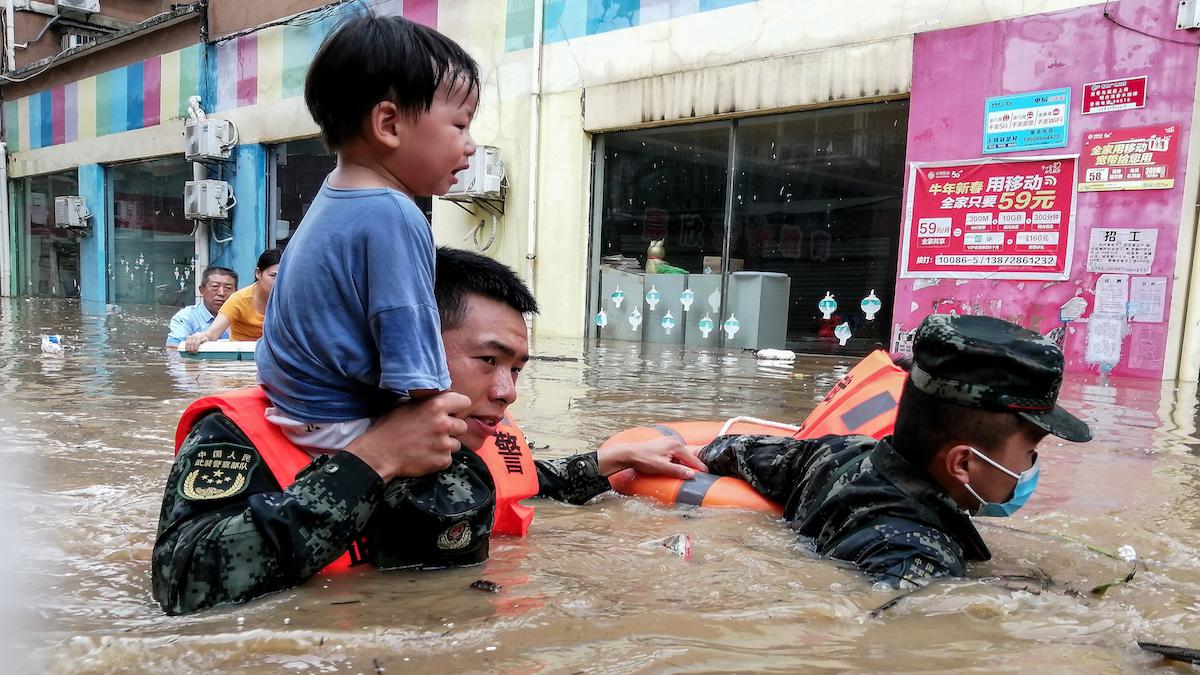 On Friday, the third anniversary of climate campaigner Greta Thunberg’s lone protest outside the Swedish Parliament, a global report revealed the scale of risks posed by the climate emergency for the world’s children.

The United Nations’ agency for children’s rights, UNICEF, introduced the first-ever Children’s Climate Risk Index, which shows that nearly half of the world’s children are at “extremely high risk” for being faced with dangerous effects of the planetary crisis. “The climate crisis is a child rights crisis,” said UNICEF.

The climate crisis is ongoing, and it’s deadly – especially to the most vulnerable.

About one billion children live in dozens of developing countries that are facing at least three to four climate impacts, including drought, food shortages, extreme heat, and disease, the report, launched in collaboration with Fridays for Future, found.

“For the first time, we have a complete picture of where and how children are vulnerable to climate change, and that picture is almost unimaginably dire,” said Henrietta Fore, executive director of UNICEF, in a statement.

Some of the highest-risk countries include India, Nigeria, and the Central African Republic — countries which are among the least responsible for rampant fossil fuel extraction and greenhouse gas emissions contributing to the climate crisis.

“The top 10 countries that are at extremely high risk are only responsible for 0.5% of global emissions,” Nick Rees, lead author of the report, told The Guardian.

While nearly half of the world’s children are at extreme risk for experiencing multiple effects of the climate crisis firsthand, nearly every child on Earth was found to be at risk for at least one impact, including heat waves and air pollution.

“Virtually no child’s life will be unaffected,” Fore said.

According to the report, 820 million children — more than one-third — are at risk for experiencing extreme heatwaves like the deadly ones that have affected the United States’ Pacific Northwest, Canada, and Western Europe this year. One in seven children are at risk for facing flooding rivers, and two billion are currently highly exposed to air pollution.

Thunberg, who is 18, was among the young climate leaders who wrote the forward to the report, demanding urgent action by the world’s policymakers as she did outside the Swedish Parliament in 2018 and then at weekly Fridays for Future demonstrations that quickly spread across the world, with millions of children and young adults joining.

“Our futures are being destroyed, our rights violated, and our pleas ignored. Instead of going to school or living in a safe home, children are enduring famine, conflict and deadly diseases due to climate and environmental shocks,” wrote Thunberg, Adriana Calderón of Mexico, Farzana Faruk Jhumu of Bangladesh, and Eric Njuguna of Kenya. “These shocks are propelling the world’s youngest, poorest, and most vulnerable children further into poverty, making it harder for them to recover the next time a cyclone hits, or a wildfire sparks.”

The young advocates also published an op-ed in The New York Times on Friday to mark the release of the report.

“The fundamental goal of the adults in any society is to protect their young and do everything they can to leave a better world than the one they inherited,” they wrote. “The current generation of adults, and those that came before, are failing at a global scale.”

The report calls for children to be included in worldwide policy discussions and decision-making regarding the mitigation of the climate crisis, including the upcoming United Nations Climate Change Conference (COP26) scheduled for November.

Policymakers attending the conference hope to secure a plan for global net-zero carbon emissions by 2050, mobilize financing from rich countries to help the developing world mitigate the crisis, and finalize regulations to make the Paris climate agreement operational.

“There is still time for countries to commit to preventing the worst, including setting the appropriate carbon budgets to meet Paris targets, and ultimately taking the drastic action required to shift the economy away from fossil fuels,” reads the report. “We must acknowledge where we stand, treat climate change like the crisis it is and act with the urgency required to ensure today’s children inherit a liveable planet.”

Considering that decisions made at COP26 “will define their future,” Fore told The Guardian, “children and young people need to be recognized as the rightful heirs of this planet that we all share.”

The report also recommends increasing the resilience and delivery of social services including healthcare, access to clean water, and social safety nets to “mitigate the worst impacts of climate change” and nature-based solutions to the crisis including wetland restoration and ecosystem protection.

UNICEF highlighted some positive recent large-scale changes including the falling cost of renewable energy sources and increased recognition by the financial system of “the risks that a degrading climate poses,” leading to divestment from pollution-causing fossil fuel projects.

“One of the biggest reasons for hope is the power of children and young people. In recent years, children and young people have taken to the streets to demand action on climate change, and throughout the Covid-19 pandemic they have continued their protest online,” reads the report. “They have revealed the depth of frustration that they feel at this intergenerational form of injustice, as well as their courage and willingness to challenge the status quo, and their role as key stakeholders in addressing the climate crisis.”

“Children are not afraid — and nor should they be — to demand that adults do everything they can to protect their future home,” said UNICEF.

“Movements of young climate activists will continue to rise, continue to grow and continue to fight for what is right because we have no other choice,” said Jhumu, Njuguna, Calderón, and Thunberg in the report. “We must acknowledge where we stand, treat climate change like the crisis it is, and act with the urgency required to ensure today’s children inherit a liveable planet.”