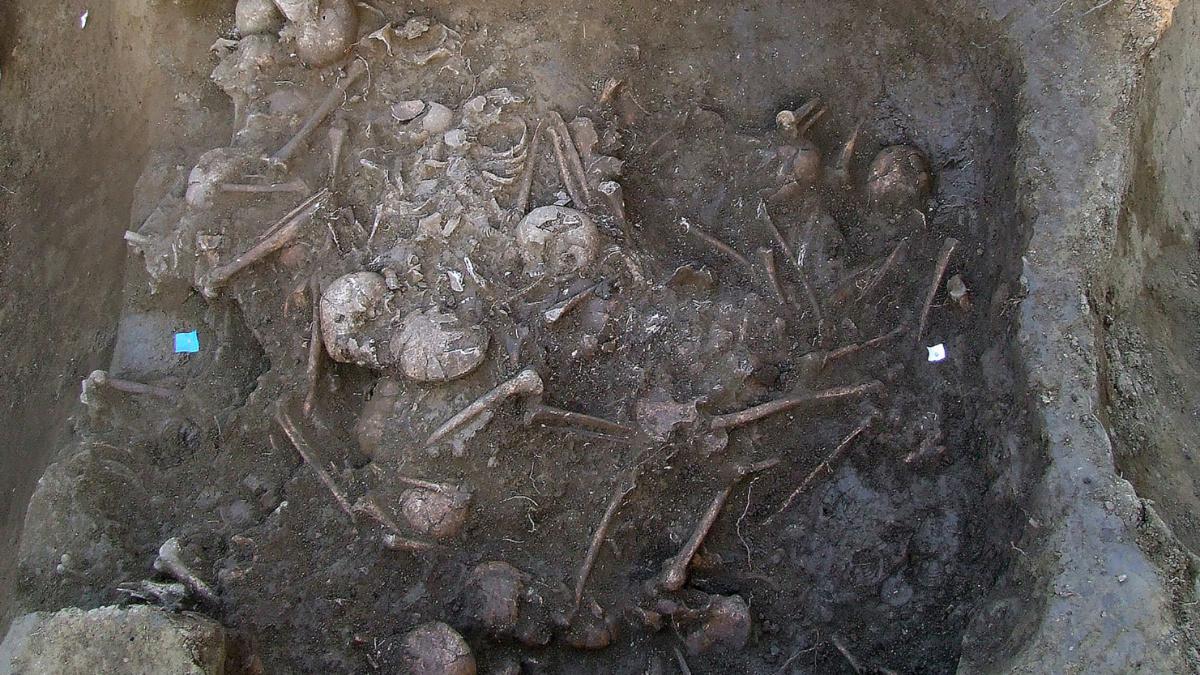 About 6,200 years ago, 41 people were killed and buried in a mass grave in what is now modern-day Croatia. According to Live Science, DNA analysis has now revealed that members of their own community may have murdered them, and some researchers suggest that a sudden population boom or shift in climate conditions could have prompted the mass murder.

The grave was discovered in 2007 in a small village in the hills of Potočani, Croatia. Heavy rains exposed a pit containing dozens of skeletons, Live Science reported. The mass grave was small, about 6.5-feet across and three-feet deep, with at least 41 bodies dumped together.

Archeologists first thought it was a modern grave from World War I or the Croatian War of Independence in the 1990s, but no contemporary objects were found with the bones, according to Live Science. Radiocarbon dating of bones, soil and pottery fragments confirmed a burial date around 4200 B.C.E.

“This makes Potočani one of the first and earliest cases of systematic killing on a large scale in Europe proven by genetic data,” said Mario Novak, the study‘s lead author and head of the Laboratory for Evolutionary Anthropology and Bioarchaeology at the Institute for Anthropological Research in Zagreb, Croatia.

Further inspection of the bones and DNA data revealed “random killing without any concern for age or sex,” Novak told Live Science. Men, women and children were killed in relatively equal numbers. Many of the killing blows were strikes to the skull from behind, and there were no indications that the victims tried to defend themselves.

Genetic analysis also revealed that the victims were not a targeted family group, because 70 percent of the deceased were not closely related, Novak explained. But, because the victims’ shared homogenic genetic ancestry that was almost identical to other contemporary populations from the region, Novak and his team were able to eliminate the hypothesis that the massacre was related to the arrival of new immigrants. Rather, they believe that the victims were a smaller part of the local, stable population.

These factors led the researchers to suspect a massacre.

“Basically, [all this] means that the perpetrators did not target a certain age or sex category within this community or even a certain family, as we could see in some similar prehistoric examples from continental Europe,” Novak said. “The indiscriminate killing recorded in Potočani shows that this was a pre-planned act, most probably with a goal to completely exterminate this community without any consideration or remorse for their victims.”

The Potočani mass grave is similar to others found in modern-day Germany and Austria dating to around 5000 B.C.E., Novak said. In total, scientists have found five or six similar cases from continental Europe so far.

According to Live Science, the “most likely explanation” for the Potočani killings and the older ones in Germany and Austria are prolonged climate changes in Central Europe that caused floods or droughts. These, along with unexpected population booms, possibly led to food shortages and violent competition for resources.

Novak’s study called the reasons behind the upsurge of extreme mass violence and massacres during these eras “complex and multifactoral,” and agreed that climate-induced drops in agricultural production most likely played a part.

“Human nature hasn’t changed much (if at all) since those times,” he told EcoWatch. “By studying such ancient massacres, we might try to get a glimpse into the psychology of these people, and maybe try to prevent similar events today,” Novak told Live Science.

Novak also said it was obvious that the climate crisis profoundly impacted our distant ancestors as much as today’s modern world. He warned, “If we cannot change ourselves and our attitude toward the environment drastically, I’m afraid soon the things will start resembling these ancient massacres, but on a more global scale.”