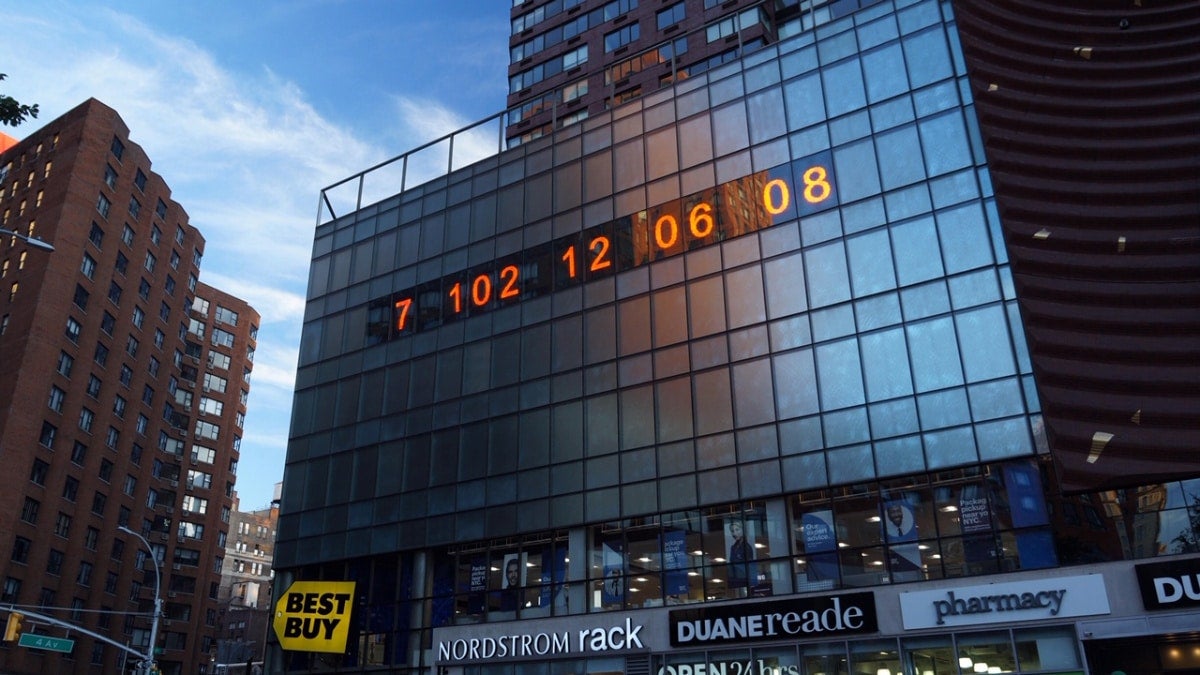 The Metronome, a famous art installation in Union Square that used to display the time of day, has been repurposed into a "Climate Clock" for Climate Week NYC. Zack Winestine

This story was originally published on Common Dreams on September 19, 2020.

Some advocates kicked off next week’s Climate Week NYC early Saturday by repurposing the Metronome, a famous art installation in Union Square that used to display the time of day, as a massive “Climate Clock” in an effort to pressure governments worldwide to take swift, bold action to reduce greenhouse gas emissions and rein in human-caused global heating.

“The clock is a way to speak science to power,” project co-founder Andrew Boyd said in a statement. “The clock is telling us we must reduce our emissions as much as we can as fast as we can. The technology is there. We can do this—and in the process, create a healthier, more just world for all of us. Our planet has a deadline. But we can turn it into a lifeline.”

Launched as people across the country are facing the deadly, devastating impacts of climate change—from historic wildfires in western states to slow-moving hurricanes and the resulting floods on the Gulf Coast—the clock in New York City on Saturday warned that the international community only has seven years and 102 days to “undertake bold transformation of our energy system and economy” in hopes of keeping global temperature rise under 1.5 degrees Celsius.

“Climate Change is already here. This clock is not an alarm clock saying, in seven years it will ring and we need to wake up! It’s more like a stopwatch already running that we have to keep pace with,” explained Gan Golan, the project originator. “We need to take action today, tomorrow, and the day after that. Let’s get moving. Every second counts. We need to act in time.”

A mobile climate clock that Swedish youth activist Greta Thunberg “now carries with her, as well as the larger Climate Clock project, was assembled by a team of artists, makers, scientists, and activists based in New York, and is part of the Beautiful Trouble community of projects,” according to Climateclock.world, which details the science behind the numbers displayed and how to install clocks in other cities.

“In an accompanying app, the artists include more detail about solutions,” Fast Company reported Saturday. “Another number tracks the current percentage of renewable energy in the world. An interactive tool shows how to ‘flatten the climate curve’ and how much difference it makes to invest more now, and to move more quickly. A DIY maker kit explains how to make a countdown clock of your own.”