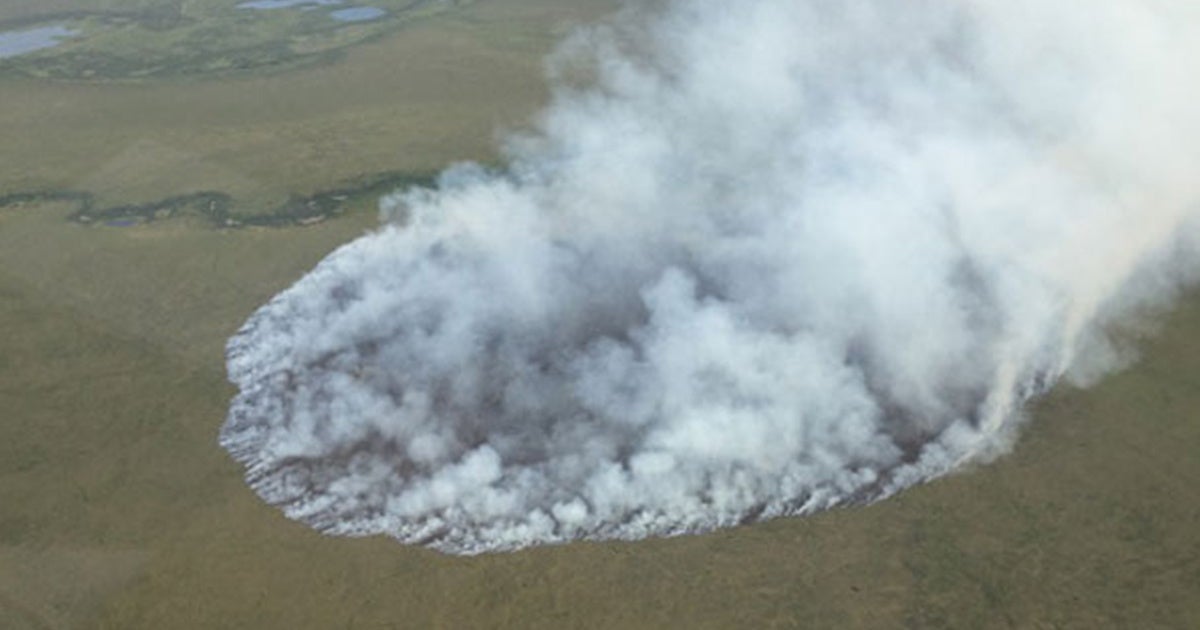 With little fanfare and scant news coverage, fire season 2019 has arrived. Firefighters are already containing blazes in several states, including Colorado, Florida and Oklahoma, and seasonal outlooks suggest that significant wildfires are likely in parts of Alaska, Hawaii and the West Coast.

While forest management and human development have increased wildfire incidence and risk, climate change has exacerbated the trend of large fires and contributed to the lengthening of the fire season, in some cases making wildfires a year-round phenomenon. In the Western U.S., climate change is a major driver behind the near doubling in burned area that we’ve experienced over the past 35 years, and has contributed to an increase in the frequency and severity of fires, while lengthening the fire season in some regions.

Fires also simultaneously aggravate the impact of climate change by releasing huge quantities of carbon dioxide and other global warming gases into our atmosphere.

As the first act of this new fire season begins to unfold, we have a renewed opportunity and obligation to address the connections between wildfires, climate change and human activity, and take steps to interrupt this vicious cycle.

Climate change is priming ecosystems in the Western U.S., Southeastern U.S. and Alaska to burn, while climate disasters like drought, rising temperatures and hurricanes compound wildfire risk and spread.

Drought is a natural occurrence. However, now we have a greater risk of hotter droughts. Rising temperatures dry out soils and trees. While drought means that less water is entering the ecosystem, rising temperatures mean that water is leaving more quickly. As temperatures rise, plants lose more water per unit of carbon dioxide, exacerbating the already dry and dangerous conditions produced by drought.

With less water coming into the ecosystem, plants become water stressed, which can kill huge numbers of plants if drought conditions persist. In extreme cases, drought itself can kill trees. Plants lose water when they perform photosynthesis, the process where plants use sunlight and carbon dioxide to make food, because they open their pores (aka stomata) to take in carbon dioxide, and water evaporates out in the process.

(This is such a big deal for plants that some have evolved special processes so they can avoid this water loss. In the desert, many plants only do gas exchange at night, when temperatures are lower and water-loss risk is the lowest.) #CAMLife #DinnerPartyFactoid

So in periods of extreme water stress like drought, they close those same pores to conserve what water they have. However, since plants aren’t able to photosynthesize with their stomata closed, they then use up their carbon reserves and literally starve, known as carbon starvation.

Alternatively, trees can also die from complications associated with drought, like an insect infestation that a healthy tree could usually defend against. Climate change has magnified the negative impacts of insects, as in the case of California’s bark beetle. Cold temperatures have historically regulated the populations of these insects, but as climate change continues to shrink the temperature range that any one given ecosystem experiences, these cold temperatures just aren’t happening anymore. These insects also grow and reproduce more quickly in warmer temperatures, which may further enhance their spread. While these outbreaks and subsequent tree deaths are changing the overall composition and structure of the ecosystem, they also can lead to a build-up of dry forest kindling. As a result, we can expect that forests in the West, Southeast and Alaska will continue to be full of dried out, ready-to-burn material.

When hurricanes make landfall, violent winds can bring down huge amounts of timber. While landfalling hurricanes are rare, these natural disasters bring down huge amounts of timber that can easily become create fuel for wildfires. In 1989, Hurricane Hugo damaged approximately 4.39 million acres of forested land in South Carolina alone and generated widespread concerns about increased fire risk from larger fuel loads and higher wind speeds. In the past month, we’ve seen a similar phenomenon play out in Florida, where downed trees from Hurricane Michael aggravated a small debris fire and inhibited firefighters as they worked to access and contain the blaze. The risk this year, however, is not isolated to Florida, and threatens large portions of the southeastern U.S.

On the flip side, the burning of trees, dead biomass and soil sends huge pulses of carbon to the atmosphere. Carbon enters an ecosystem when plants take carbon dioxide out of the atmosphere and incorporate it into their tissues. Over time, that carbon becomes integrated into soil, the largest land carbon pool, via plant roots and as dead plants decompose. These processes take time and the buildup of carbon stores is gradual. However, when fire roars through, all that carbon literally goes up in smoke.

In carbon-rich areas like boreal forests, arctic tundra and peatlands, the impact of fire on climate change is further amplified. The carbon in these ecosystems accounts for about 50 percent of global soil organic carbon or twice what is currently in the atmosphere as CO2. These ecosystems have built up carbon in their soil over MILLENNIA and a single fire can devastate these stocks.

In addition, fires release particulate black carbon that can magnify the effects of climate change in two ways. When suspended in the atmosphere, the particles trap heat, magnifying the warming of Earth’s surface. Once these same particles disperse and settle on ice or snowy surfaces, they can decrease the reflectivity and melt ice in areas like Greenland, further warming the world.

Due to our prolonged and ever-growing addiction to fossil fuels, we’re exacerbating climate change which feeds back to catastrophic wildfires. Our continued spewing of global warming gases to the atmosphere has caused many of the climatic complications discussed above. As a result, we’re continuing to worsen a problem that we ourselves created.

Beyond fossil fuels, humans have aggravated wildfires by suppressing most fires, moving into wild areas, and simply igniting the fires ourselves. Total suppression has been the primary strategy of the U.S. federal government on nearly all conterminous U.S. land for decades, despite indigenous knowledge and practices that preceded this policy. Unlike homes, restaurants and businesses, our national forests have evolved with fire, requiring it for seed germination, competition reduction and general ecosystem maintenance. The absence of fire means that material (branches, logs and understory shrubs) that would normally burn off in regularly returning fires, has accumulated in these forests over time, creating fuel-rich conditions that drive these devastating wildfires. This suppression has also increased forest density creating greater competition for resources (especially in drought) and allowing fires to spread more easily through the forest.

To interrupt the climate side of this cycle, we NEED to reduce our overall global warming emissions. This is achievable through a number of channels, including reducing our dependence on fossil fuels and moving to cleaner energy sources. We can also remove carbon from the atmosphere and protect the large stores of carbon that already exist. Regardless of the mechanism, addressing our current wildfire predicament and guarding against future disasters requires that we also address climate change and global warming emissions.

To interrupt the cycle from the fire side, we need to codify information from fire science into proactive fire management policy. Research demonstrates that prescribed burns, reduction of fuel loads, reestablishing historic fire return intervals (the frequency with which an ecosystem experiences a fire event), reducing expansion into the wildland urban interface and strategic preventative planning at the can all decrease the prevalence and intensity of the mega fires we’ve seen in recent years. On a more local and regional scale, fuel treatments and prescribed burns can be an effective strategy to reduce wildfire risk.

While science has revealed how we can work to resolve our current predicament, we are slow to follow through. Democrats, Republicans and bipartisan coalitions in the Senate have drafted legislation to address our nation’s wildfire problem in the past 3 years, but none of these bills made it into law. In March 2018, we made progress with a budget that included a major restructuring of funds for fire fighting efforts, including a disaster fund for wildfires. However, President Trump’s most recent budget proposal slashes funds for forestry in both the USDA and DOI, suggesting the progress made in 2018 may not be sustained.

Prescribed fires, where managers intentionally set and monitor fires towards ecological ends, are already used as a tool across the country to reduce fuel loads and mimic natural fire return intervals. The risks of this strategy, such as fire escape and increases in air pollution, often discourages decision makers from using this management option. While nearly 99 percent of prescribed fires are successful, those that escape are often the ones we hear about, like the Cerro Grande fire in 2000. As an alternative, manual removal of fuels (mechanical thinning) can reduce burn intensity and speed of fire spread while maintaining the ecological integrity of the ecosystem. In situations where prescribed fire is untenable, like following Hurricane Hugo, alternative strategies like fuel breaks and strategic build-up of suppression capacity can more effectively reduce risks of catastrophic wildfires.

Despite the bleakness of our current situation and the dangers that wildfires pose, we have the knowledge and skills to break this vicious cycle. 2019 seems as good a time as any to start.

Carly Phillips is the Kendall Fellow for Protecting Carbon in Alaska’s Boreal Forests with the Climate & Energy program at the Union of Concerned Scientists.