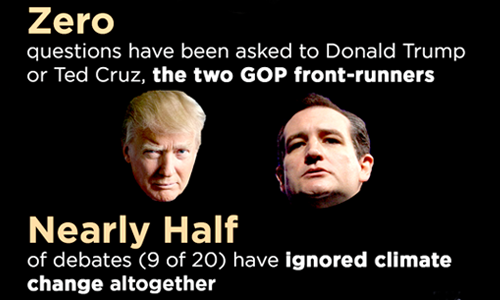 With 20 presidential primary debates now completed, debate moderators have only asked 22 questions about climate change, which is just 1.5 percent of the 1,477 questions posed. In addition, the moderators were more than twice as likely to ask a climate question to a Democratic candidate than to a Republican candidate, and they have not asked a single climate question to Donald Trump or Ted Cruz, the two front-runners for the GOP presidential nomination. Nearly one-third of the climate questions were asked in the two most recent debates in Miami, following a bipartisan group of 21 Florida mayors urging the networks to address the issue in those debates. 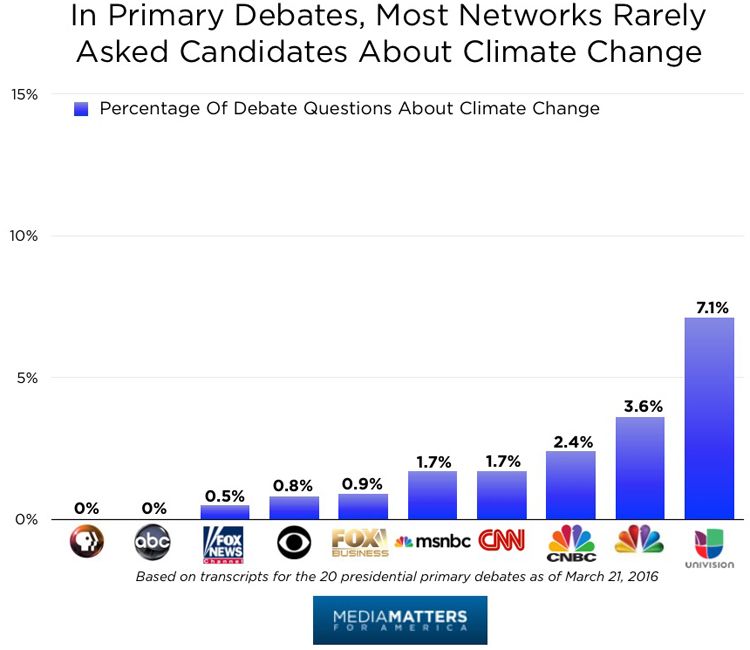 Just 1.5 Percent Of Presidential Debate Questions Were About Climate Change

Only 22 Of The 1,477 Questions Asked During 20 Presidential Primary Debates Have Been About Climate Change. Through 20 Republican and Democratic presidential debates, debate moderators have only asked 22 questions about climate change, making up 1.5 percent of the 1,477 questions asked during the debates.

Most Networks Asked About Climate Change In Less Than Two Percent Of Questions, ABC And PBS Did Not Ask Any Climate Questions. Among the ten networks that have hosted presidential primary debates, the moderators on Univision have asked the highest percentage of questions about climate change (7.1 percent), followed by NBC (3.6 percent), CNBC (2.4 percent), MSNBC (1.7 percent), CNN (1.7 percent), Fox Business (0.9 percent), CBS (0.8 percent) and Fox News (0.5 percent). Moderators on ABC (two debates) and PBS (one debate) did not ask a climate question.

Nine Out Of 20 Debates Did Not Feature A Question About Climate Change. Nine of the 20 presidential debates have not included a question about climate change. Fox News, CNN, and ABC each moderated two debates that did not include a question about climate change, while Fox Business, PBS, and CBS each moderated one debate that did not feature a climate question.

Climate Change Questions To Republicans Were Particularly Rare, And Moderators Have Not Asked A Single Climate Question To GOP Front-Runners Trump And Cruz

Debate Moderators Have Failed To Ask GOP Front-Runners Trump And Cruz A Single Question About Climate Change. Through 12 GOP presidential debates, moderators have not asked a climate change question to either of the two GOP front-runners, Donald Trump and Ted Cruz. Among the GOP field, debate moderators directed climate change questions to Florida Sen. Marco Rubio (three questions by CNN and one by Fox News), New Jersey Gov. Chris Christie (two questions by CNBC and one by CNN), Kentucky Sen. Rand Paul (one question by Fox Business), and Ohio Gov. John Kasich (one question by CNN). [Politico 2016 Delegate Tracker, accessed 3/21/16]

ABC Ignored Climate Change In Debates And Provided Much Less Climate Coverage in 2015 Than Other Nightly News Shows. A recent Media Matters study of climate change coverage on the broadcast networks found that ABC’s World News Tonight aired just eight climate-related segments in 2015, far fewer than its counterparts on PBS (58), CBS (20), and NBC (20). ABC moderators similarly dropped the ball in the network’s debates, failing to ask a climate question in either the Democratic or Republican debate hosted by the network. Meanwhile, although PBS NewsHour aired more segments addressing climate change than the other nightly news shows combined, PBS moderators surprisingly failed to ask a climate question in PBS’ Democratic debate. [Media Matters, 3/7/16]

In First Eight Presidential Debates, Moderators Asked More Than Ten Times As Many Non-SubstantiveQuestions As Questions About Climate Change. A Media Matters analysis of the first eight presidential debates found that debate moderators asked the presidential candidates more than ten times as many questions about the political horserace and other non-substantive issues as they asked about climate change. [Media Matters, 1/11/16]

Bipartisan Group Of 21 Florida Mayors Urged Networks Hosting Debates In Miami To Ask Candidates About Climate Change. On March 4, a bipartisan group of 21 Florida mayors wrote letters to the hosts of the March 9 Democratic debate and March 10 Republican debate, both of which took place in Miami, urging them to ask the presidential candidates about climate change. The letters provided sample questions for the moderators to ask the candidates and stated: “We, the 21 undersigned mayors from throughout Florida, are concerned about sea level rise and climate change and the severe impacts it is having on our communities. We are equally concerned that so little attention has been paid to these issues in the presidential debates. It would be unconscionable for these issues of grave concern for the people of Florida to not be addressed in the upcoming debate you will be hosting in the state.” [Media Matters, 3/8/16]

The Two Debates In Miami Accounted For Nearly One-Third Of All Climate Questions Asked During The 20 Primary Debates. In the debates held in Miami, moderators asked presidential candidates seven questions about climate change, accounting for nearly one-third of the 22 climate questions asked over the course of all 20 primary debates. In the March 9 Democratic debate hosted by Univision and The Washington Post, thePost‘s Karen Tumulty noted the Florida mayors’ concerns about climate change and rising sea levels, and Tumulty and Univision’s Jorge Ramos asked a total of four questions (three to Bernie Sanders and one to Hillary Clinton) about how the candidates would address the issue. In the March 10 Republican debate hosted by CNN, co-moderator Jake Tapper noted that Republican Miami mayor Tomas Regalado, who had endorsed Rubio, had requested that Tapper ask Rubio: “Will you, as president acknowledge the reality of the scientific consensus about climate change and as president, will you pledge to do something about it?” Tapper then asked Rubio whether he has told Regalado that “he’s wrong” about climate change, and also asked Kasich, “What would you say to the mayor of Miami?” [The Washington Post, 3/9/16; CNN.com, 3/15/16].