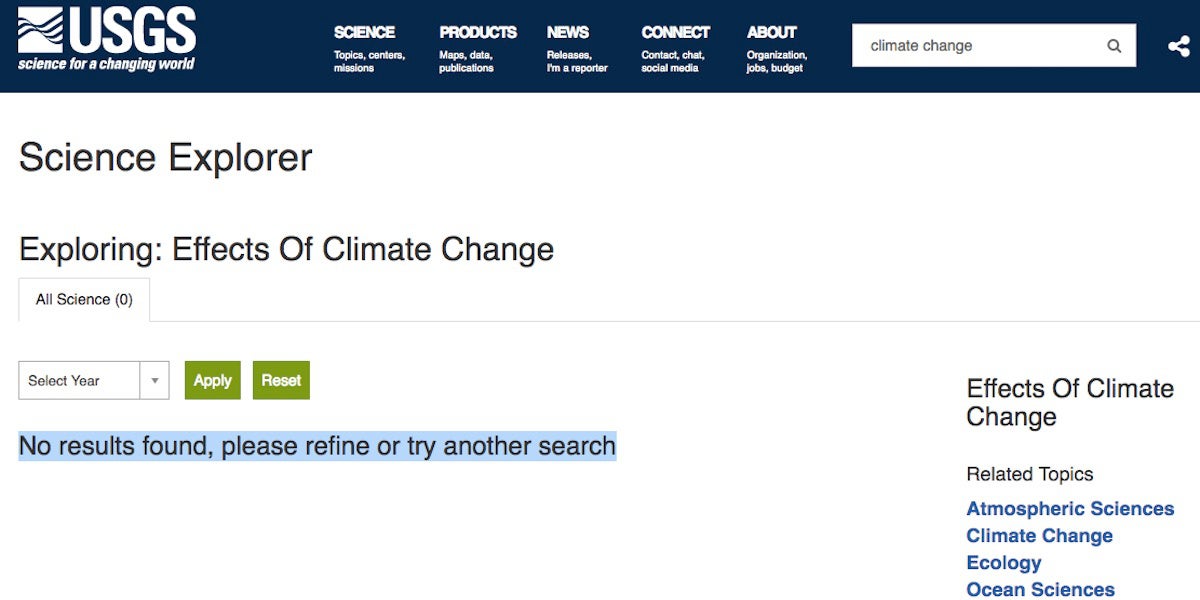 Yet another U.S. agency has deleted climate change information from its website. This time, the U.S. Geological Survey’s “Science Explorer” website—a tax-payer funded online database for the public to browse USGS science programs and activities—has been purged of thousands of formerly searchable climate science links.

The startling discovery was made by
Peter Gleick, a climate scientist and member of the U.S. National Academy of Science.

“I didn’t realize how badly Trump has eviscerated access to federal #climate data, so I went and looked at the USGS site,” he tweeted Sunday.

In a series of tweets, Gleick noted the extent to which climate-related links have been expunged from the site a month after
Donald Trump took over the White House:

Gleick found the archived pages with the Wayback Machine, but pointed out on Twitter that “archived pages are no substitute for real public access.”

He also told ThinkProgress: “This is shocking in the extent of the changes, and distressing in the sense that publicly funded data and science should be easily accessible, not hidden, and the changes move us in the wrong direction. Every federal agency website has undergone changes like this.”

The effects of climate change are inextricably linked to human health. The burning of fossil fuels releases carbon dioxide and other greenhouse gases that traps heat in the atmosphere, causing global temperatures to spike, air quality to worsen, all while fueling droughts, floods and storms that impact food and water security.

But the president, as well as many leaders of the Republican party and among the administration, treat climate science with skepticism to outright denial. Media outlets have also reported that staffers from other federal agencies, including the Department of Agriculture and Department of Energy, have been instructed to specifically avoid the phrase “climate change.”