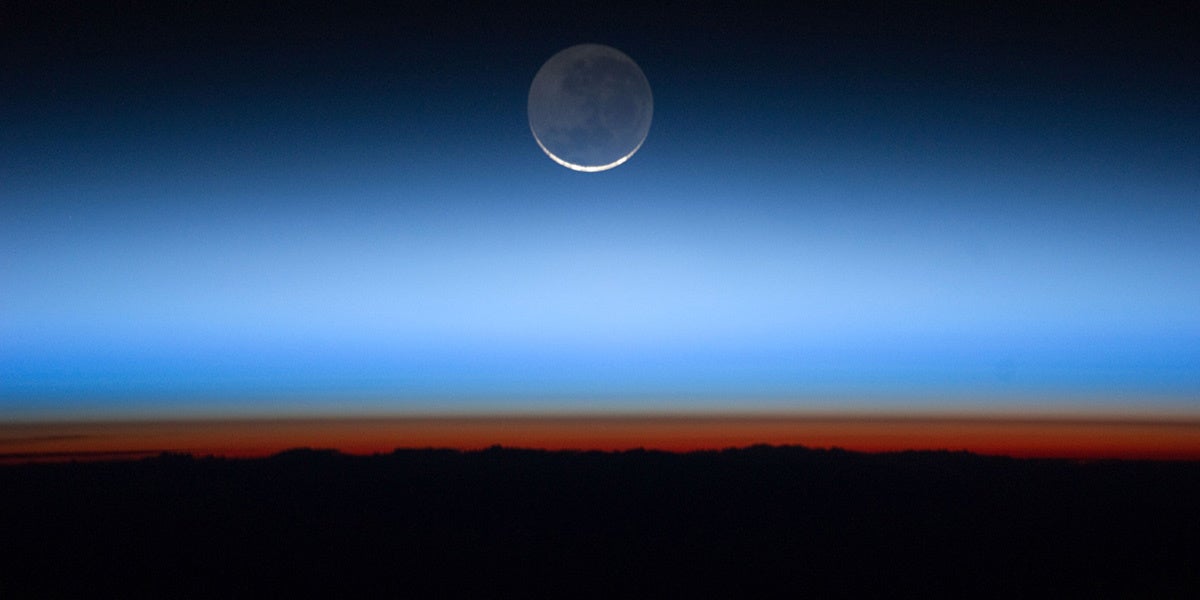 Moon with orange-colored troposphere band, the lowest and most dense portion of the earth's atmosphere. NASA

A study published in Science finds that climate change has caused an increase in the difference between summer and winter temperatures across North America and Eurasia over the past four decades.

The findings show the “substantial human influence on Earth’s climate, affecting not only global averages, but also local and seasonal changes,” another scientist says.

Most of the world’s weather originates in the troposphere, a second scientist tells Carbon Brief, meaning that changes to seasonal temperatures could be affecting the likelihood of extreme weather events, such as flooding and drought.

Evidence shows that the seasons are changing. In Europe, for example, analysis of the first-emergence dates of more than 500 plant species shows that the first day of spring has advanced by six to eight days in the past three decades.

However, working out to what extent seasonal changes can be explained by climate change—rather than natural climate variability, caused by phenomena such as El Niño—presents more of a challenge.

To quantify the influence of climate change versus natural variability, scientists often carry out “attribution” studies.

The new study is the first to assess how climate change could be influencing seasonal temperature changes in the troposphere—a layer that covers roughly the first 17 kilometers (approximately 10.6 miles) of the atmosphere above the earth.

Writing in their research paper, the team, led by Dr. Ben Santer, a scientist at the Lawrence Livermore National Laboratory, said:

“Our results suggest that attribution studies with the changing seasonal cycle provide powerful evidence for a significant human effect on Earth’s climate.”

For the study, the researchers analyzed atmospheric temperature data recorded by satellites throughout the summer and winter months from 1979-2016. (Carbon Brief has published an explainer on how satellite temperature records compare with measurements at the earth’s surface.)

The map below shows how the difference between summer and winter temperatures, expressed as an average per decade, has changed across the world. 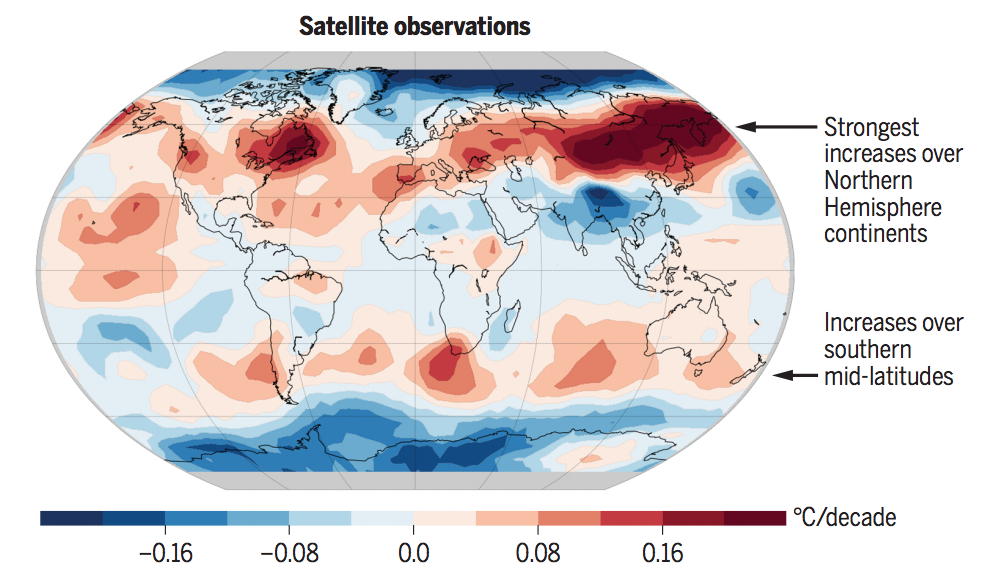 The map shows that the difference between summer and winter temperatures has increased the most in mid-latitude regions, particularly in the northern hemisphere.

This is because, in these regions, atmospheric summer temperatures are increasing at a faster rate than winter temperatures—causing the disparity between the two seasons to grow larger and larger, the researchers say.

The northern hemisphere has experienced more summertime warming than the southern hemisphere because it contains more land, the researchers say. The presence of land means that less heat can be absorbed by the ocean—leading to amplified atmospheric warming.

The map also indicates that the eastern edges of both North America and Eurasia have experienced the greatest amounts of warming. This could be because, during the winter in these regions, warm air masses are carried from east to west—leading to milder winters along western continental margins, the researchers say.

Changes in temperatures are not as pronounced around the tropics because this region is not highly seasonal, the researchers say. Instead, the seasons in tropical regions are typically defined by rainfall (“wet” and “dry,” for example), rather than by temperature.

The reason that winter atmospheric warming may have accelerated above Antarctica is less clear. However, previous research suggests that the presence of polar clouds in the stratosphere (which sits above the troposphere) could be playing a role.

To understand to what extent the observed seasonal changes were influenced by human-caused climate change, the researchers compared the satellite results to climate models.

The model simulations, which ran from 1979-2016, included a range of natural factors that can influence tropospheric temperature, including the cooling effect of volcanic eruptions and aerosols. To include the impact of human-caused climate change, the researchers used a “business-as-usual” emissions scenario known as RCP8.5.

The results show that only simulations that include the impact of human-caused climate change could correctly predict the patterns of seasonal temperature change recorded by the satellites.

This indicates that humans are having a “substantial influence” on the temperatures in the troposphere, said Dr. William Randel, a senior scientist at the National Center for Atmospheric Research, who was not involved in the research. In an accompanying perspectives article, he writes:

“[The] findings provide further markers of a substantial human influence on Earth’s climate, affecting not only global averages, but also local and seasonal changes.”

However, it is not clear how temperature changes in the troposphere could affect conditions at the land surface, he adds:

“The connection between changes at the surface and the free troposphere awaits explanation.”

One possible effect could be changes to the timing and likelihood of extreme weather events, said professor Neil Harris, head of the Centre for Environment and Agricultural Informatics at Cranfield University, who was not involved in the research. He told Carbon Brief:

“The paper significantly increases confidence that the observed changes in the troposphere—where all our weather is—are consistent with models and that they are of human origin. This gives more confidence in the existing findings of an increase frequency of extreme weather, such as more intense rainfall and more extreme summer hot spells.”