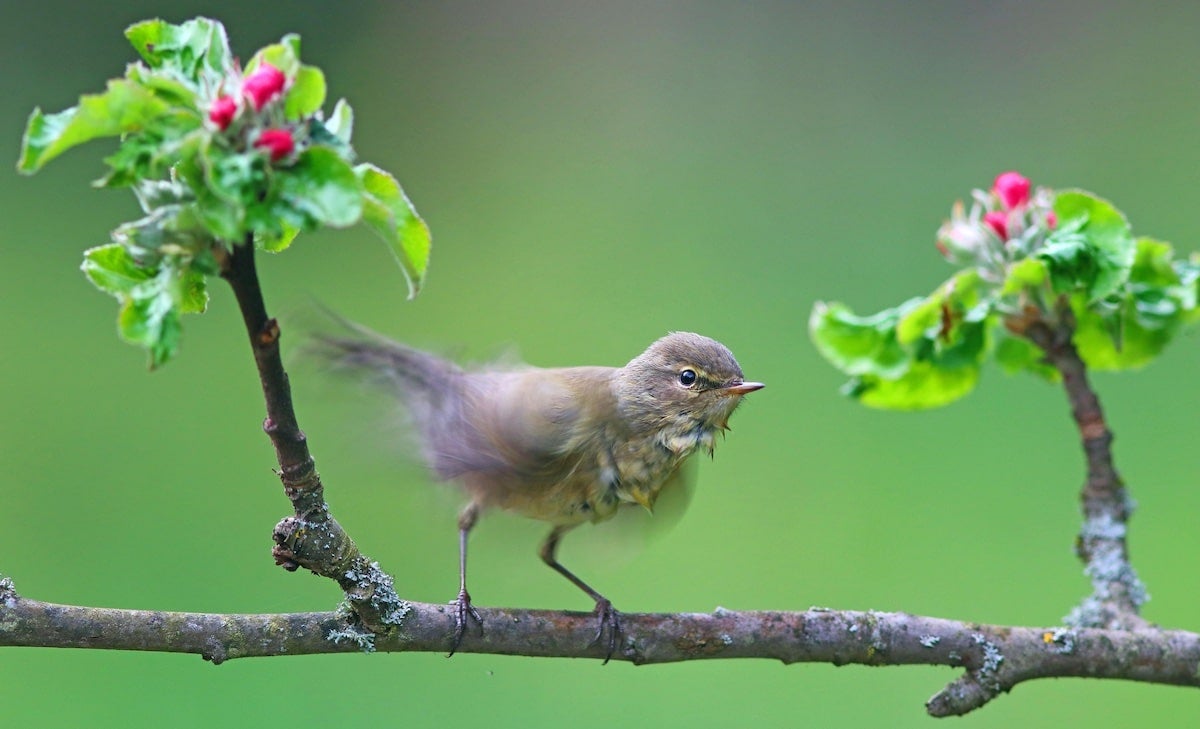 A chiffchaff on a flowering apple branch in Germany. Climate change is causing the birds to lay their eggs earlier in the year. imageBROKER / Ottfried Schreiter / Getty Images

A new study has found that the climate crisis is causing major disruptions to European birds, from shifting their nesting dates to decreasing their chick numbers to even changing their general body sizes.

The study, published in the Proceedings of the National Academy of Sciences, found that rising temperatures and non-temperature effects of climate change are transforming European birds, such as garden warblers, chiffchaffs, and crested tits.

The authors focused on data collected on 60 species in Britain since the mid-1960s, reviewing changes in egg-laying, body form, and number of offspring. From there, researchers determined what impacts were caused by higher temperatures and what other factors played a role in these transformations.

More than half, about 57%, of the effects were linked to increasing temperatures, but other factors, like habitat loss, pollution, invasive species, and diseases, also contributed. About 32% of the 60 species studied experienced body changes related to heat stress. The researchers found that 86% of birds in the study experienced a shift in egg-laying dates, with 31% of the 60 birds also experiencing a change in the regular number of offspring.

“For example, climate change caused chiffchaffs to lay their eggs six days earlier over the last 50 years, but other unknown environmental factors led to an additional six days, meaning in total they now lay their eggs 12 days earlier than they did half a century ago,” Martijn van de Pol, lead author of the paper from James Cook University in Australia, told The Guardian.

Similarly, garden warblers saw a decrease in offspring by 26%, which can be detrimental to the species. While some species are experiencing lower offspring numbers and shrinking body sizes, some of the birds in the study faced opposite impacts. Redstarts are growing larger and having more offspring.

“The study gives a well-grounded explanation for why different species change at such different rates,” Shahar Dubiner, an ecologist at Tel Aviv University and was not involved in the study, told The Guardian. “And it is not to do with temperature sensitivity, but with those other, non-temperature factors.”

Dubiner’s research on birds in Israel, including migratory birds, has found similar changes in the birds’ body shapes and sizes.

The study highlights that while warming is clearly causing challenges for bird species, there are other factors that need attention, too.

“As we increase our understanding of how changes in climate directly impact species and how nonclimatic variables simultaneously drive changes, we can better identify those species or populations most at risk from climate change,” the study concluded.