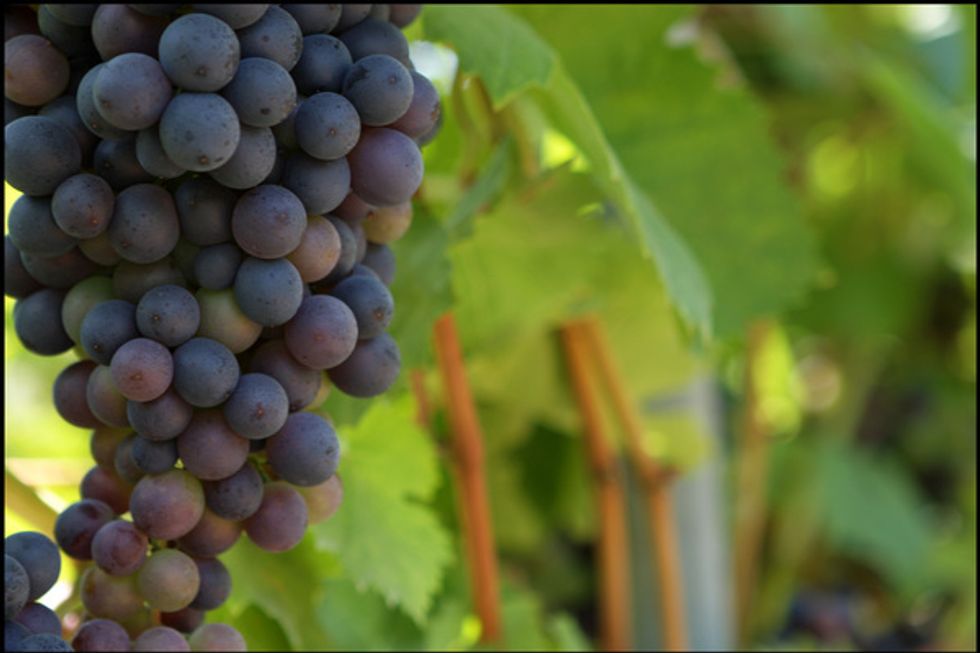 True or false? Wine grapes may soon be growing around Yellowstone National Park in Wyoming. Wines from New Jersey are statistically indistinguishable from French wines. A little over a century ago, Algeria was the world’s largest wine exporter. China is the world’s fastest growing wine-producing country.

As it turns out, all of these statements are true—and each has an important lesson for conservation.

Grapes at the Mercouri Estate vineyard outside of Olympia, Greece. Photo: © Nick Allen

I recently led a research team of scientists from six universities and conservation groups in a study looking at the impacts of climate change on wine and what they might mean for conservation. Our paper, Climate Change, Wine and Conservation, was just published in the latest issue of the journal Proceedings of the National Academy of Sciences. The results surprised even us, as did a number of things we found out along the way.

Our study produced the first global map of future suitability for wine production. Here are four factors that might change where the world’s wine is grown:

The area north of Yellowstone will be one of the areas with the greatest increase in suitability for growing wine grapes in the next 50 years. The reason is climate change. Temperatures are warming, and suitable lands for wine grape growing are moving north.

This shift may have a big conservation impact on the Yellowstone to Yukon Conservation Initiative (Y2Y), an innovative attempt to connect wildlife habitats between Yellowstone and Canada’s Yukon Territory. Vineyards would be a major impediment to this connectivity. They provide poor habitat for wildlife, and would probably have to be fenced to avoid bears snacking on the grapes.

These changes in North America are symbolic of changes happening across the globe. Wine suitability is moving toward the poles. In South Africa, Chile and Australia, there is little land left in the direction of the South Pole, and suitable area for vineyards is declining. In the north, there is a lot of high-latitude land, and area suitable for vineyards is expanding. This will result in a global redistribution of wine-producing regions, with some serious consequences for ecosystems and wildlife habitat.

Wine from Montana doesn’t sound so wild when you consider the results of a blind wine tasting organized by the Journal of Wine Economics. The test pitted New Jersey wines (yes, these exist!) against French wines. Judged by French wine experts, the scores for the New Jersey wines were statistically indistinguishable from the French wines; the French judges couldn’t tell them apart.

If experts can’t reliably tell them apart, most consumers won’t be able to either, and wine from anywhere—even Montana—could become competitive in the global market. This result swings the doors wide open to wines from everywhere—and our study shows that lots of new places, some in very good wildlife habitat, will become suitable for wine.

But people have their preferences, and won’t switch easily—or will they? In your great-grandfather’s time (or great-great-grandfather, depending on your age), the world’s largest exporter of wines was actually Algeria, a country that today produces almost no wine. What changed? The swing came because of market forces; French production recovered from a fungal blight, and Algeria’s markets dried up.

Are the forces that drove that dramatic shift so different from climate change? What happens when wine-growing regions in the Southern Hemisphere lose suitability and large areas of suitability open close to major markets in North America and Europe? In North America, that change may come on lands that are currently important habitat for grizzly bears, mountain lions, pronghorn, elk and many other species that need large natural landscapes to survive.

Owl among the vines at a vineyard in Chile. Photo: © Jack Zalium

Believe it or not, China is the fastest growing wine-producing region in the world. By aggressively buying both wine and vineyards, the country’s upper classes are driving up the price of both. As this upper-class fervor for wine reaches the middle class in China, demand will explode.

Much of that demand will be met by imports, but China has suitable areas for growing wine grapes, and production will start there as well. Those areas happen to be in the same mountains that are habitat for giant pandas, so wine expansion in China may have repercussions for what is arguably the world’s most iconic animal.

Lions and pandas and bears, oh my—are they really wrapped up in the future of wine? Do we have to choose between a nice red and nice wildlife habitat? Not necessarily.

Consumer awareness and sustainable industry practices are already a potent combination in wine marketing. However, wine industry eco-initiatives currently focus largely on land management and pesticides and little on where the vineyard is located or the impact on wildlife. But this can change, particularly if vineyards and conservationists work together—and if consumers make it known that wildlife-friendly wine production is important to them.

What we’ve learned about wine has important implications for agriculture, climate change and conservation in general. Just as it’s moving wine-producing regions, climate change will be moving other agricultural areas, which may displace wildlife habitat. An important lesson for the future of conservation is that we need to consider not just direct climate change impacts on species (like polar bears) but also the indirect impacts: moving agriculture into areas that are currently providing important services for people and wildlife alike.