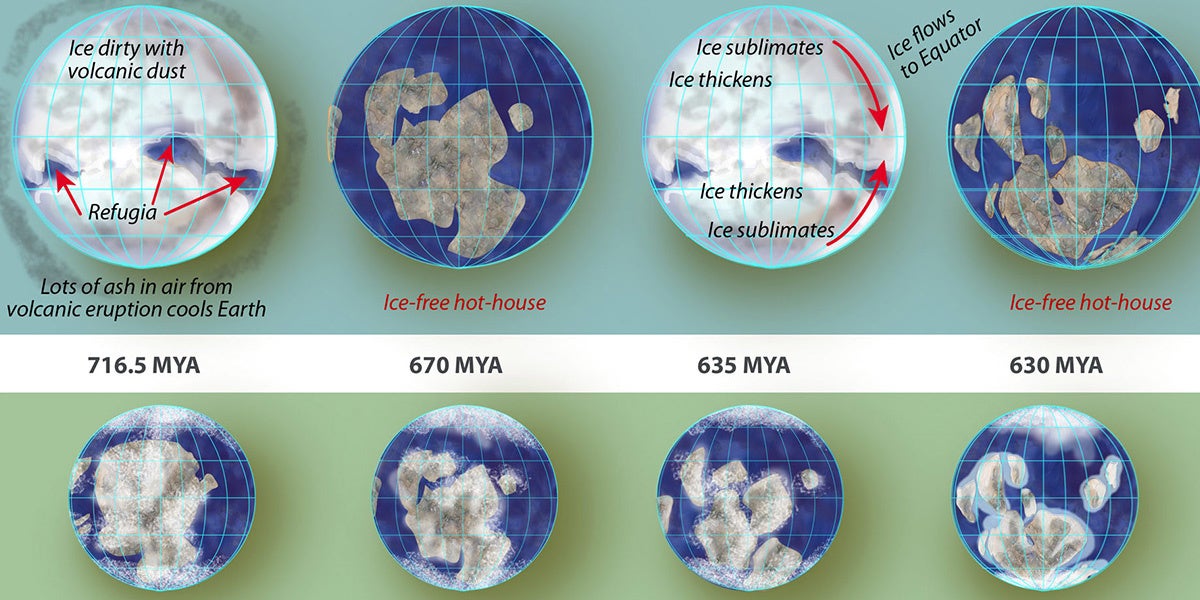 Movements of the earth’s crust may mean that global warming driven by greenhouse gases from power stations and vehicle exhausts isn’t the only threat to life the world faces.

About 700 million years ago, global temperatures fell so low that glaciers may have reached the equator. Snowball Earth may have all but extinguished life on the planet. But the only life at the time was microbial and dispersed in the oceans.

The planet survived: volcanic eruptions may have darkened the ice and pumped more carbon dioxide and steam into the atmosphere, and the world warmed again.

“Earth is the only body in our solar system known to currently have plate tectonics, where the lithosphere is fragmented like puzzle pieces that move independently,” said Robert Stern, a geoscientist at the University of Texas at Dallas.

All other rocky planets so far observed are shielded by a single “lid”: one outer sphere of rock that seals any liquid or molten interior. But the earth’s surface is alive, continuously interacting with the atmosphere and the oceans, and perhaps making life itself possible, as well as precarious.

Professor Stern and Nathan Miller at the University of Texas at Austin report in the journal Terra Nova that there could be at least 22 ways in which the movement of tectonic plates could have delivered a calamitous drop in planetary temperatures, and they propose that until about 700 or 800 million years ago, the planet’s crust was rigid.

Only in the Neoproterozoic did the tectonic plates start moving, to grind into each other, build mountains, set the rocks quivering, ignite eruptions and set up weather systems that accelerated erosion and drew down carbon dioxide into rock carbonates, eventually to trigger a dramatic form of global cooling.

Research like this is tentative: the authors offer a hypothesis to be challenged, rather than a theory to be confirmed. But research like this is fundamental: to understand the subtleties of the present climate, now inexorably being altered by human action, it is necessary to understand change in the past as well, and to establish the principles that control the planet’s overall climate history.

In the same spirit, other scientists have confirmed that greenhouse gas emissions could in theory make the planet uninhabitable, that the presence of life on Earth means the planet could perhaps never freeze entirely and that the changes already wrought by humanity make another Ice Age less likely.

The Texas study’s most radical proposal is a new date for the commencement of tectonic activity, relatively late in the planet’s history. The idea that Earth was all but covered with ice has been confirmed in various ways. What is new is the suggestion that the movements of the Earth’s surface might have triggered a climate convulsion.

“In the present day, climate is in the news because we’re changing it by putting more carbon dioxide into the atmosphere,” said Stern. “But imagine a time when Earth didn’t have plate tectonics, and it then evolved to have plate tectonics—that would have been a major shift in the Earth’s operating system, and it would have had a huge effect on climate, too.”