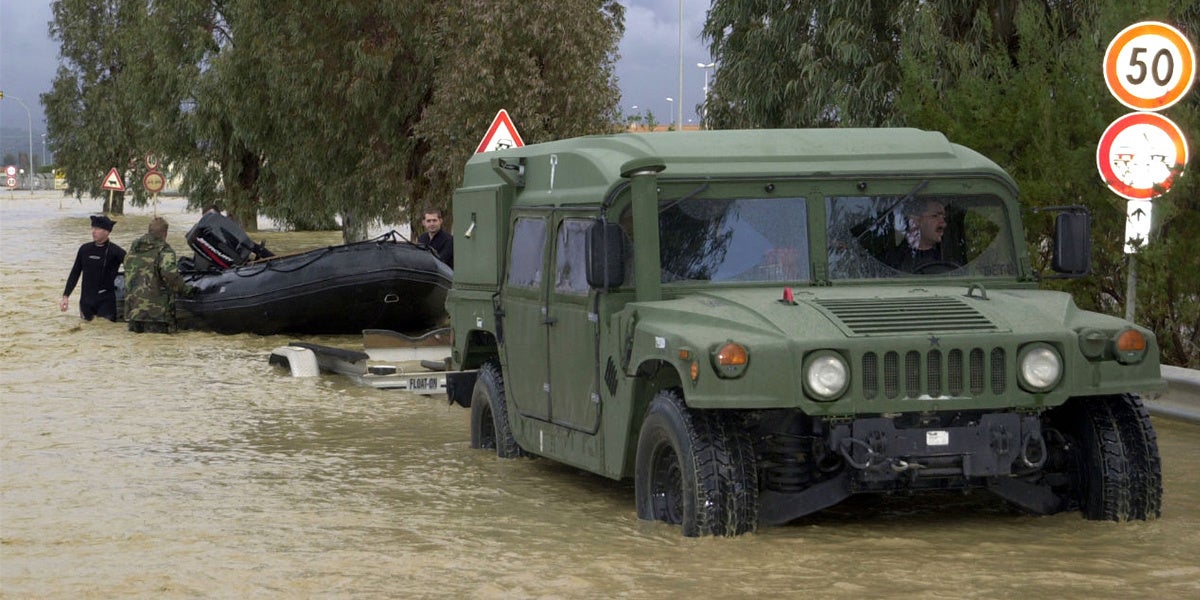 Once more, the administration of President Trump seems puzzled about how seriously—if at all—it should regard how climate effects strike U.S. military abilities.

In December the president listed the global threats he reckoned the U.S. was facing—and climate change didn’t get a mention. Now, though, the U.S. Department of Defense says many of its bases are feeling the worrying impacts of climate change.

Around half of U.S. military bases worldwide are already experiencing those impacts, a Pentagon report says. A survey shows risks to military infrastructure related to climate and extreme weather are widespread, affecting nearly 50 percent of the 1,684 sites involved.

The survey, described as a vulnerability assessment, identifies several key categories of risk: flooding, both from storm surges and causes such as rain, snow, ice and river overflows; extreme heat and cold; wind; drought; and wildfire. The Pentagon says the risks are not confined to vulnerable coastal sites.

The survey paints what the Center for Climate & Security (CCS), a U.S. non-partisan policy institute composed of security and military experts, calls “a concerning picture of current climate change-related risks to military installations both at home and abroad.”

John Conger, a senior policy adviser at the CCS, is a former U.S. deputy under-secretary of defense. He told the Climate News Network:

“This report represents the first survey of climate impacts across the Department of Defense’s installation enterprise, and while it does not detail specific impacts, the breadth of impacts it reports is significant.

“No region is immune from climate impacts. This work will form the foundation of vulnerability assessments and mitigation planning in the future.”

As rapid climate change is projected to intensify most of these risks during this century, the CCS said, it is reasonable to expect that military sites will become more vulnerable unless significant resources are devoted to adaptation, or the rate and scale of climate change are reduced.

“What is potentially significant about this survey … is how widespread climate change-related risks to military assets already are,” it said.

The vulnerability statement insists that the Pentagon will do what it thinks necessary to protect its bases: “Our warfighters require bases from which to deploy, on which to train, or to live when they are not deployed.

“If extreme weather makes our critical facilities unusable or necessitates costly or manpower-intensive work-arounds, that is an unacceptable impact.”

The CCS said the survey makes it clear that climate change is already affecting the U.S. military’s ability to do its job, finding that many installations are “highly vulnerable to a variety of different types of extreme or severe weather events. Scientists expect heat waves, flooding, drought and wildfires to all increase over the coming decades.”

On the president’s December failure to include climate change in his list of global security threats to the U.S., Mr Conger said, “While it is unfortunate that mention of climate was dropped from the strategy, it isn’t surprising.

“I expect the U.S. military will continue to focus on mission assurance efforts and it clearly recognizes climate change is one of the risks it must consider. The omission won’t block the DoD from working on climate resilience, but its reduction in priority is likely to slow progress.”

Beyond Harvey and Irma: Homeland Security in the #ClimateChange Era https://t.co/usqEF0kKuw pic.twitter.com/wupv48ijQj