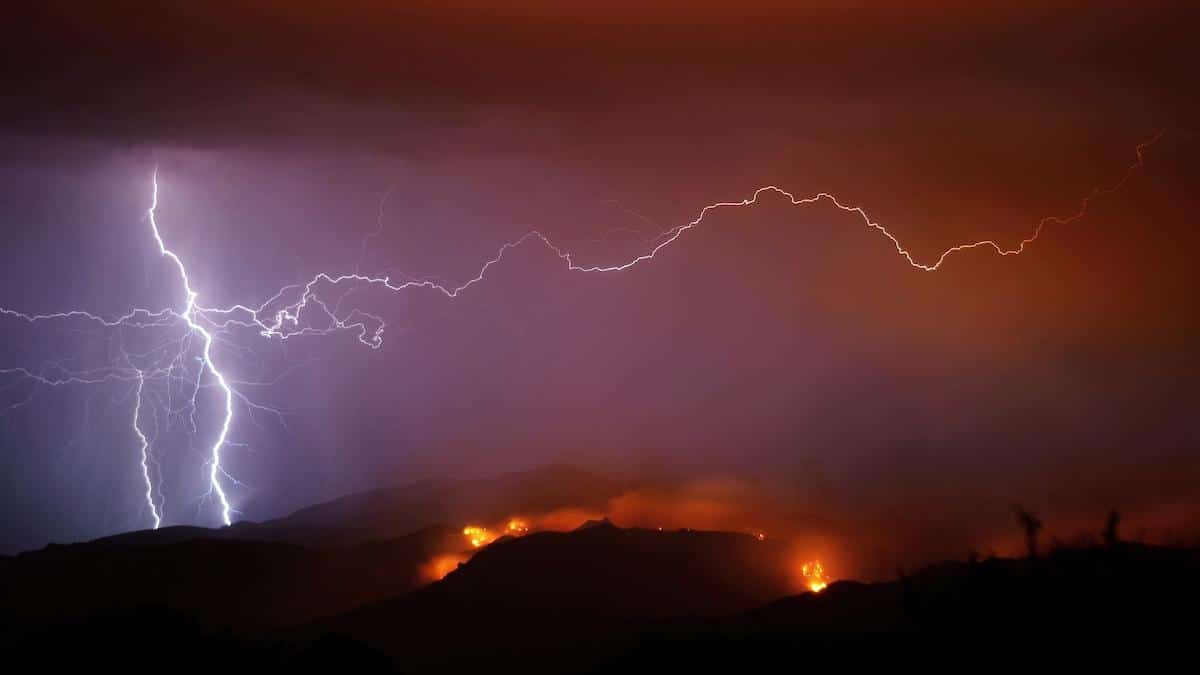 The Charley Fire northeast of Phoenix, Arizona was started by a lightning strike in 2012. Nic Leister / Moment / Getty Images

As the planet’s temperature warms, the frequency of lightning strikes is expected to grow with it, Environmental Journal reported.

Currently, lightning strikes the earth’s surface nearly eight million times a day. This number is expected to dramatically increase as global temperatures rise, according to a study published by Science. The U.S., for example, could experience a 50 percent increase in the number of lightning strikes by the end of the century, if greenhouse gas emissions are not curbed.

“The distribution of lightning is directly linked to the Earth’s climate,” Nathan Neal, a marketing director at Biral, wrote. “The daily and seasonal heating of the continental landmasses results in large temperature fluctuations, which influences atmospheric stability and the development of thunderstorms.”

But lightning is more than just a symptom of climate change. It also directly impacts the global climate, Eos reported. When lightning strikes, it produces nitrogen oxides, a strong greenhouse gas.

In the fastest-warming part of the planet, the Arctic has reported an increase in lightning over the past decade. A recent study suggests that the number of annual summertime lightning strikes above a latitude of 65° North rose from around 35,000 in 2010 to nearly 250,000 in 2020, Nature reported.

These results are a “symptom of global climate change,” Robert Holzworth, an atmospheric physicist at the University of Washington in Seattle and leader of the study, said in reference to the Arctic’s two-year record for the largest area of land burnt by wildfires, some of which were ignited by lightning.

The Arctic is not alone in experiencing an increase in lightning strikes and resulting wildfires.

In August, 20,203 lightning strikes were recorded in California within just four days. Part of what CalFire called the “fire siege,” the four-day event recorded more than half of the month’s typical lightning total. More than 700 new wildfires followed, burning an area larger than the state of Delaware, The Washington Post reported.

So, how will the increase of lightning strikes cause future climate damage?

“But it must not be forgotten that lightning is hazardous; it can strike and kill people, trigger potentially devastating wildfires, play a part in destructive floods and in the case of the U.S. can lead to the creation of tornados,” he added.

Lightning, in relation to wildfires, is also an uncommon topic in public discourse, John Abatzoglou, an associate professor in management of complex systems at the University of California, Merced, told The New York Times. “We want to personify these fires. We want to blame somebody. But lightning doesn’t have a face,” he said.

Regardless of how climate change will impact lightning frequency, the resulting impacts of lightning strikes will grow more severe as the planet grows warmer and drier.

“Even if there were no changes in lightning frequency, the impact of warmer and drier conditions associated with climate change help make lightning more effective at igniting wildfires,” Nina S. Oakley, a research scientist at the Center for Western Weather and Water Extremes at the Scripps Institution of Oceanography, University of California, San Diego, told The New York Times. “With drier vegetation, there is a greater likelihood of a lightning strike igniting a fire, and greater opportunity for that fire to grow.”