A critical hearing in the
landmark climate lawsuit brought by 21 youth plaintiffs across the U.S. will take place in just four days at a federal courthouse in Eugene, Oregon. 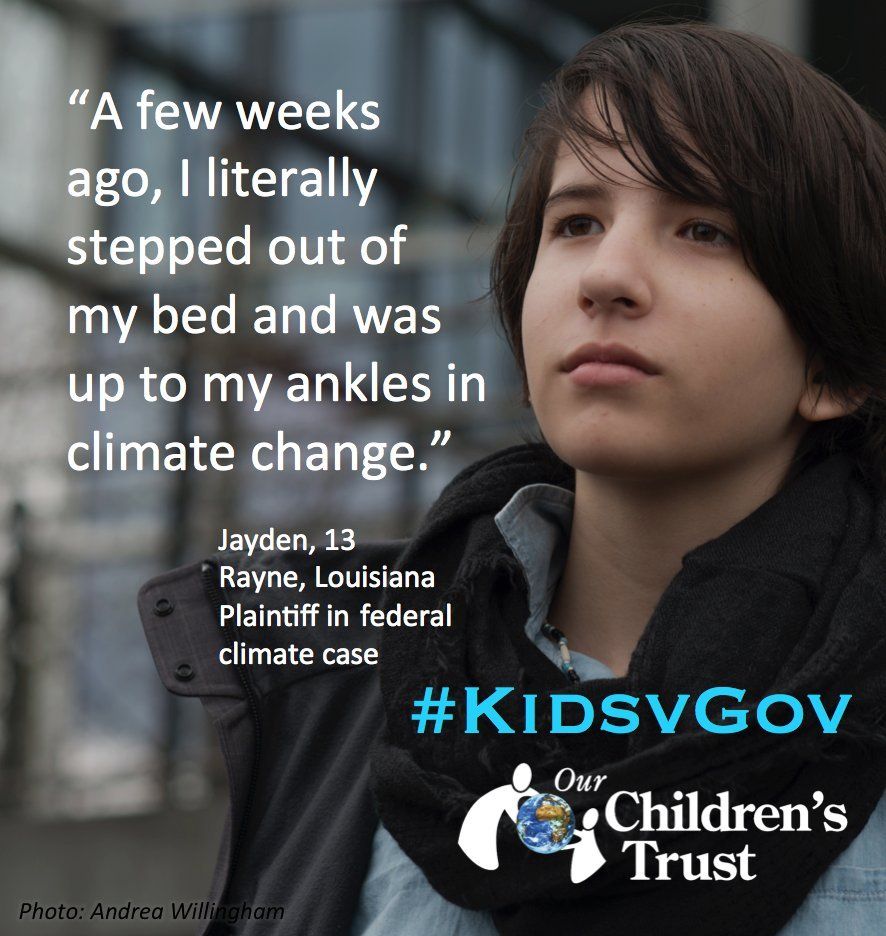 According to the nonprofit Our Children’s Trust, “the plaintiffs are suing the federal government for violating their constitutional rights to life, liberty and property and their right to essential public trust resources, by permitting, encouraging and otherwise enabling continued exploitation, production and combustion of fossil fuels.”

Judge Aiken will review an earlier decision from U.S. Magistrate Judge Thomas Coffin of the same federal court. In April, Judge Coffin surprisingly ruled in favor of the young plaintiffs despite motions from the government and the fossil fuel industry to dismiss the case. The fate of the historic lawsuit is now in Judge Aiken’s hands, who will determine whether the case will either proceed toward trial or to appeal.

One of the plaintiffs, Jayden, is a 13-year-old resident from Rayne, Louisiana. The hearing is particularly significant especially after last month’s
climate change-fueled flooding destroyed most of Jayden’s home.

“They called it a thousand-year flood, meaning it should only happen every thousand years or so,” Jayden said. “But in my state—Louisiana—we have had that thousand-year flood and eight 500-year floods in less than two years. A few weeks ago, I literally stepped out of bed and was up to my ankles in climate change. Soon I will leave my home, which is still a mess—no walls, no carpet, even my little brothers toys were destroyed! But I feel like I have to go to court, because my little brother can’t speak for himself, he’s too little. But I can speak for him, and for everyone in my generation. It’s time we were heard. It’s time President Obama protects our future, and my little brothers future.”

“My client Jayden, who is 13 years old, just survived a thousand-year flood event that devastated her home with sewage-contaminated rivers running through her bedroom and her community,” said Olson, who is also the executive director and chief legal counsel of Our Children’s Trust.

“This is the ninth flood event that is supposed to happen once every 500 years or more to hit her region in two years, floods that would not happen but for climate change. Yet, the national energy policy of the U.S. is ‘drill baby, drill.’ And by 2040, fossil fuel consumption will still make up more than 75 percent of our energy supply compared to 80 percent today. According to these federal defendants, by 2040 our carbon dioxide emissions will at best be flatlining at dangerous levels. Make no mistake, the U.S. government has caused climate change and continues to promote a fossil fuel system that is violating the rights of these 21 young plaintiffs.”

In his April decision, Judge Coffin indicated that since young people will face the brunt of global warming, they have the right to sue the government for climate justice. He wrote:

“The debate about climate change and its impact has been before various political bodies for some time now. Plaintiffs give this debate justiciability by asserting harms that befall or will befall them personally and to a greater extent than older segments of society. It may be that eventually the alleged harms, assuming the correctness of plaintiffs’ analysis of the impacts of global climate change, will befall all of us. But the intractability of the debates before Congress and state legislatures and the alleged valuing of short-term economic interest despite the cost to human life, necessitates a need for the courts to evaluate the constitutional parameters of the action or inaction taken by the government. This is especially true when such harms have an alleged disparate impact on a discrete class of society.”

“Jayden and her fellow plaintiffs will be entering the hearing Tuesday with momentum from legal victories from their peers,” Our Children’s Trust stated. “Aside from their own victory before Judge Coffin, they are emboldened by other youth plaintiff wins in state courts in Washington, Massachusetts and New Mexico. Not to mention other state and international legal actions underway, all with support from Our Children’s Trust.”

In June, plaintiff Xiuhtezcatl Martinez stopped by Real Time with Bill Maher to talk about the lawsuit and the importance of government action on climate.