Insurers Should Support People, Not the Fossil Fuel Industry 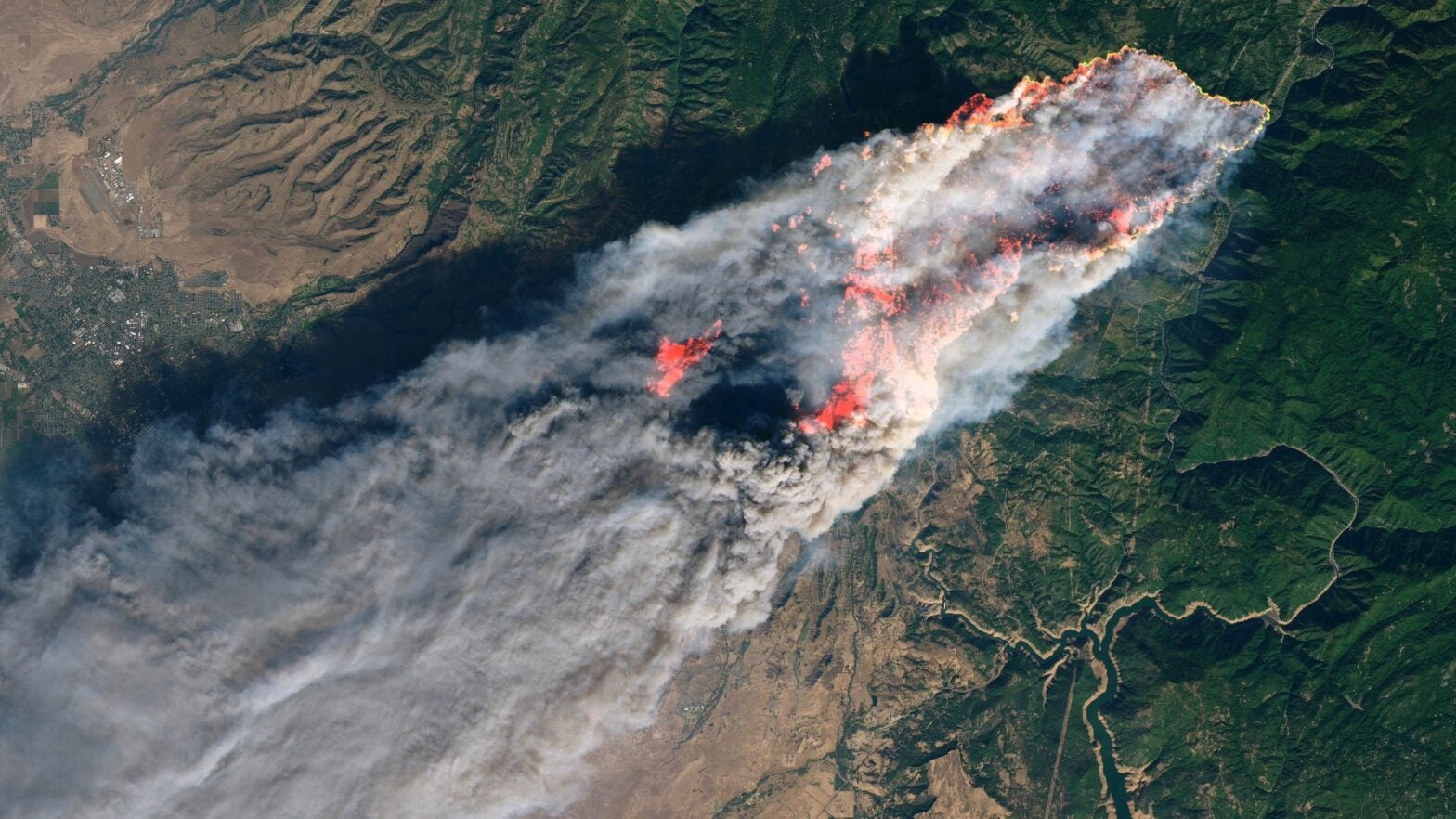 On the morning of Nov. 8, 2018, the Camp Fire erupted 90 miles (140 kilometers) north of Sacramento, California. By evening, the fast-moving fire had charred around 18,000 acres and remained zero percent contained, according to news reports. NASA

On Nov. 8, 2018, I was trapped in my car as embers fell all around me in Paradise, California, and the thought that kept going through my head was, “This can’t be the same fire [that had been reported 10 miles away only two hours before]. Fires can’t move like that.”

I should know: I spent nearly a decade studying wildland fire history, fire ecology and fire behavior in Southern California for the U.S. Forest Service and other agencies.

But it was the same fire.

I thought a lot of other things on that cold, windy morning stuck in an endless line of unmoving cars, as the flames engulfed the homes around me. I thought I would never see my wife again. I thought I was going to die.

I didn’t die that day, though 85 people did. But I came away from that experience knowing that climate change isn’t some far-off dystopian prediction that we don’t need to worry about. I met climate change face to face that day. It is real. It is here. And it is happening right now.

Five of the most extreme fires in all of California history have happened in the past two years. In 2017, the Thomas Fire set a record as the largest ever fire in California — only to be surpassed eight months later by the Ranch Fire. In 2017, the Tubbs Fire set a record as the most destructive fire in California history — only to be far surpassed 13 months later by the Camp Fire in Paradise. The 2017 Carr Fire experienced an unheard-of fire tornado with winds of 143 miles per hour — equal to an EF-3 tornado. What fire researchers like myself used to consider to be inconceivable fire behavior has become the new normal.

“But you had insurance, right? So you’re OK, right?” is something I’ve heard over and over during the past year.

Despite having what we thought was excellent homeowner’s insurance, having paid for hundreds of thousands in coverage that we are legally owed — our insurer, Nationwide, still refuses to pay us. The only thing that compares to the trauma of the fire is the trauma of having to fight for something that you already paid for. But it turns out that insurers aren’t as “on our side” as their advertising jingles imply.

We ended up leaving our family behind and moving 2,700 miles from home just to have a shot at being able to afford rebuilding our lives with what our insurer “gave” us.

How does that make sense? How can insurance companies be investing in the very thing that is causing massive losses to their policyholders across the country and around the world?

What, exactly, is their end game?

Insurers are pulling out of California in droves, sending “nonrenewals” to tens of thousands of homeowners, raising rates (for those they don’t cancel) by several hundred percent, or just not writing policies at all for large areas of the state.

What do they think is going to happen to their business if they stop writing policies in the West because of wildfires, in the Midwest because of recurring floods and droughts, and in the South and East because of hurricanes and sea level rise?

What do they think their business is going to be in a world of climate change? Whose side are they on?

Instead of contributing to the very thing that is destroying our communities, insurers should be at the forefront of climate action, working with policyholders to make their homes more resilient, investing in communities — not coal companies — to make needed changes to reduce risk and increase readiness for climate change. In areas where the risk is too high, insurers should be actively helping policyholders to relocate rather than taking a “rebuild or get nothing” attitude. They should stop investing in and insuring fossil fuel companies and projects.

Insurers, in short, should be on our side, not on the side of the fossil fuel industry.

Tony Dunn is a former fire ecologist and fire behavior researcher. He also worked for Pacific Gas & Electric as the director of the Sierra Energy Center in the Sierra Nevada foothills. After the Camp Fire, he relocated to western North Carolina. Follow him on Twitter: @adunnphoto.