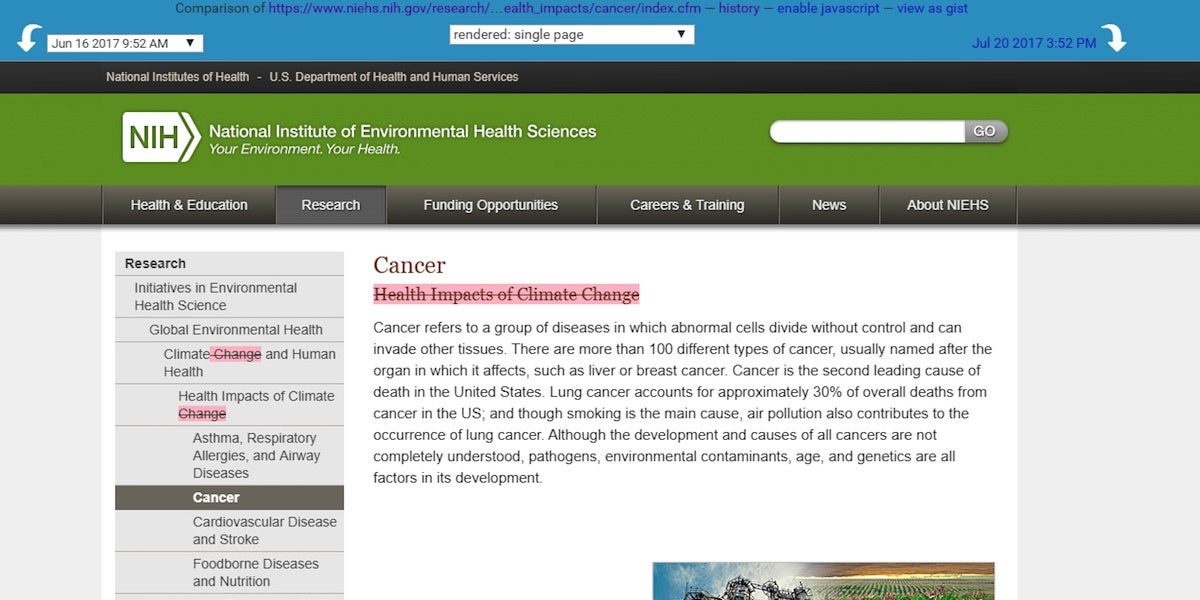 The effects of
climate change are inextricably linked to human health. The burning of fossil fuels releases carbon dioxide and other greenhouse gases that traps heat in the atmosphere, causing global temperatures to spike, air quality to worsen, all while fueling droughts, floods and storms that impact food and water security.

Climate change is
making us sick in many ways, but it appears that the Trump administration is trying to downplay this fact.

The National Institute of Environmental Health Sciences (NIEHS) has “altered climate change language, updated climate change references, and reduced access to a Web resource with information on climate change and human health across several webpages,” according to a new report from the Environmental Data & Governance Initiative (EDGI), which monitors changes to federal agency websites.

The NIEHS studies the effects of the environment on human health and is one of the 27 institutes and centers of the National Institutes of Health. EDGI told reporters this is the first time an agency within the
Department of Health and Human Services has made climate-related changes to its online resources.

Changes to the NIEHS website are subtle but telling. For instance, the watchdog group noticed the
Global Environmental Health pages has changed the term “climate change” to simply “climate” on side menus and page titles. These changes occurred in late July.

Granted, that’s just a single word. The term “climate change” also remains in the body of the page’s current text. However, for many leaders of the Republican party and among the Trump administration, climate science is treated with skepticism to outright denial. Media outlets have also reported that staffers from other federal agencies, including the Department of Agriculture and Department of Energy, have been instructed to specifically avoid the phrase.

The subtitle “Health Impacts of Climate Change” was also stricken from a page about climate change and cancer, but semantics are not the only changes on the site. According to EGDI researchers, in July “NIEHS also removed links to an educational 4-page fact sheet titled, Climate Change and Human Health, from two separate pages: a library of brochures and fact sheets, and a page dedicated to explaining the environmental impacts of climate change.”

While the fact sheet is still hosted on the NIEHS website, access has been significantly reduced, the report added.

A spokesperson for the group told
POLTICO PULSE that the changes appear targeted to reduce the prominence of climate issues, adding that other language on the pages was not affected. PULSE also noted that other Health and Human Service websites still host climate change information, including HHS.gov/climate that states, “The U.S. Department of Health and Human Services (HHS) considers climate change to be one of the top public health challenges of our time.”

EDGI is an international coalition of academics and nonprofits organizations that formed after Trump’s election to address potential threats to federal environmental and energy policy. The group has tracked
similar website alterations at the Department of Energy’s Office of Technology Transitions (report), the Department of Transportation (report) and the U.S. Environmental Protection Agency (report).