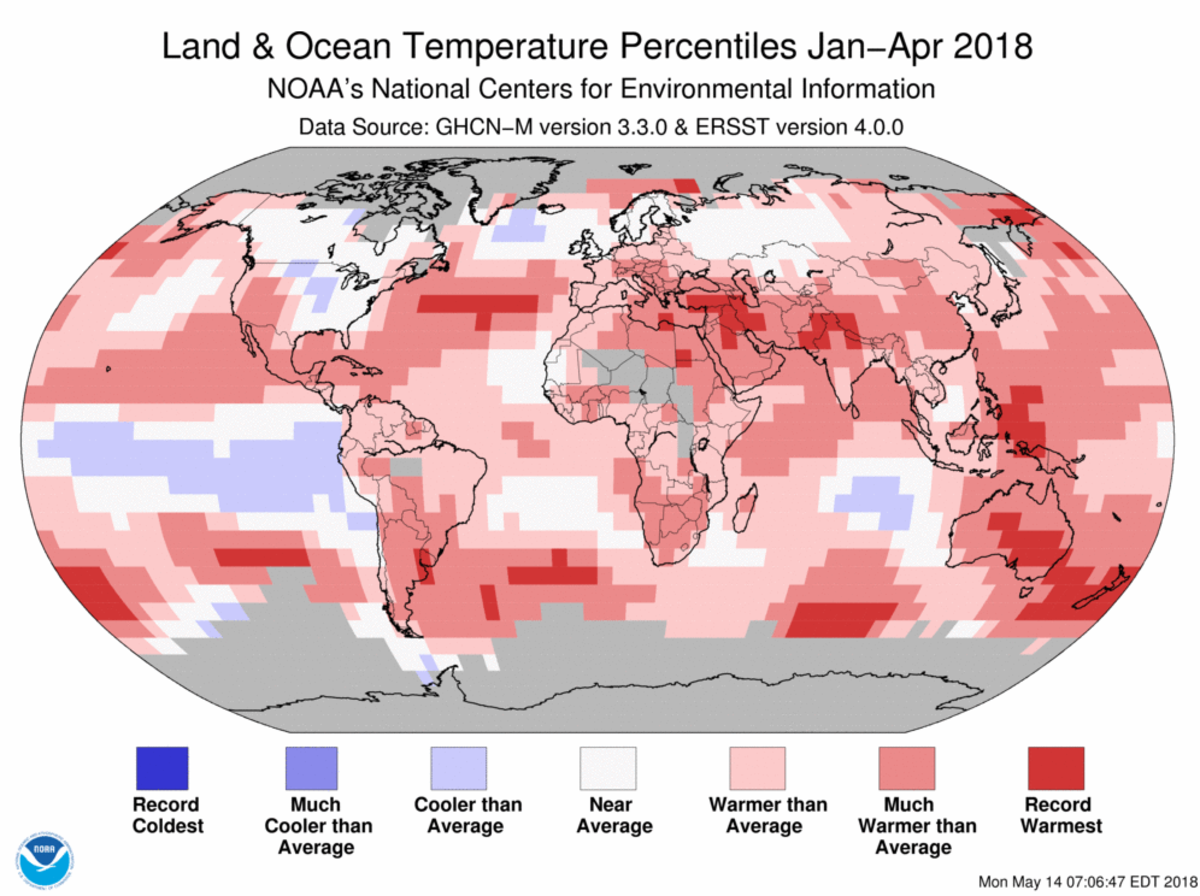 April 2018 was the 400th consecutive month of global temperatures above the 20th century average, the National Oceanic and Atmospheric Administration (
NOAA) announced Thursday.

That means the last time Earth was cooler than that average was December 1984—the same month Band Aid released “Do They Know It’s Christmas.”

This three-decade streak is not some fluke, NOAA scientists remarked.

“It’s mainly due to anthropogenic (human-caused) warming,” NOAA climatologist Ahira Sanchez told
CNN. “Climate change is real, and we will continue to see global temperatures increase in the future.”

The rising temps could be explained by natural causes such as an El Niño, but as Sanchez noted, “if you were to remove the human factor, you would still see a variability, but it would be up and down.”

For instance, the cooling effects of a La Niña or a volcanic eruption would have brought temperatures down on some years. But it’s clear that humans are influencing Earth’s temperature and the climate by burning
fossil fuels.

NOAA announced yesterday that April 2018 was the third warmest April in the agency’s global temperature dataset record, which dates back to 1880. What’s more, the period between January to April was the fifth warmest in the 139-year record.

That’s pretty remarkable, especially if you live in the U.S. If you recall, it was so unusually cold in the East Coast during winter that President Donald Trump, who often confuses the weather and climate,
remarked, “perhaps we could use a little bit of that good old global warming.”

While North America was cooler-than-average during this stretch, other countries and much of the Southern Hemisphere set heat records. Central Pakistan, for example, experienced a blistering 122.4 degrees Fahrenheit on April 30.

This chart details some of the month’s climate anomalies: 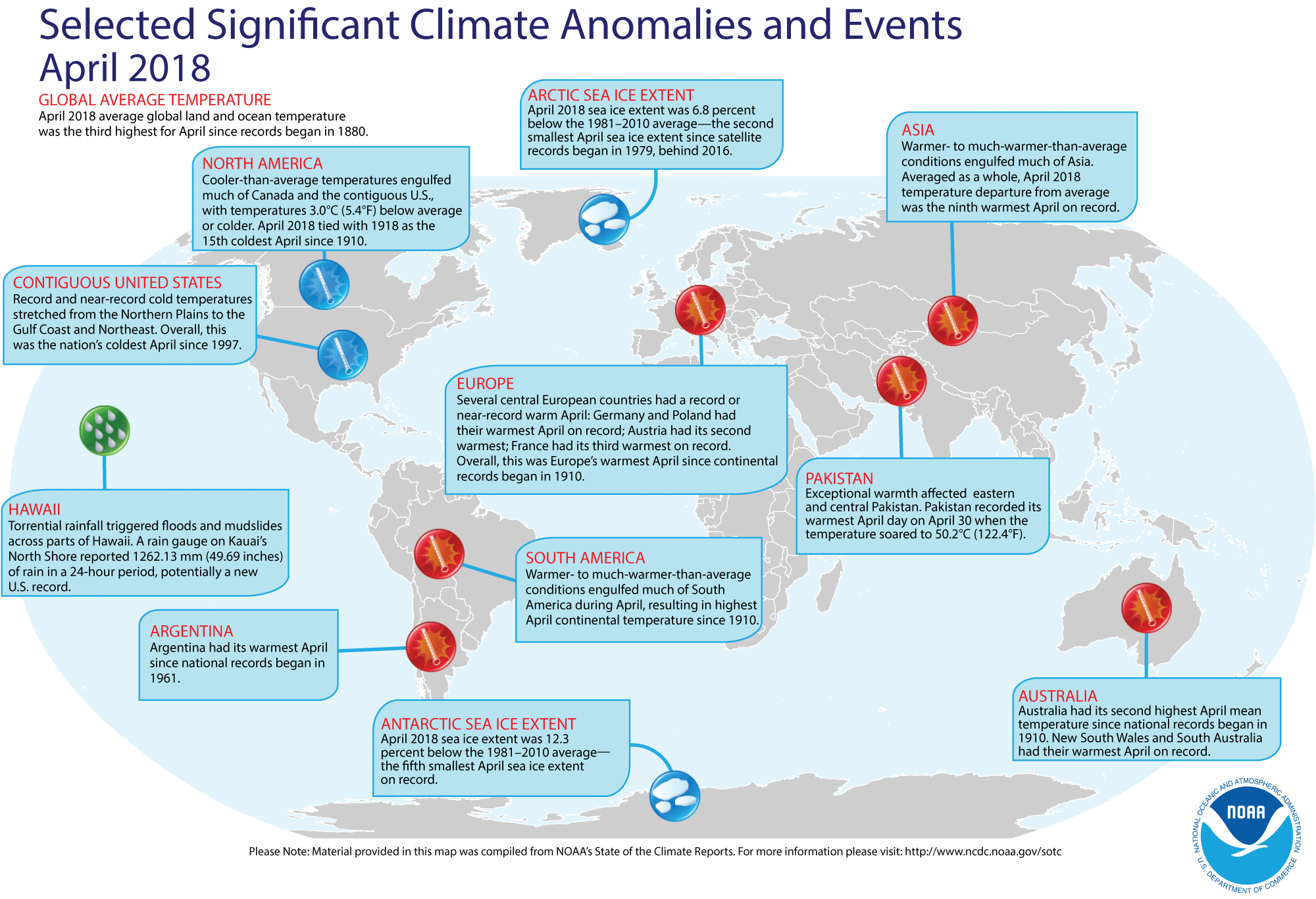 “We live in and share a world that is unequivocally, appreciably and consequentially warmer than just a few decades ago, and our world continues to warm,” NOAA climate scientist Deke Arndt told
USA TODAY. “Speeding by a ‘400’ sign only underscores that, but it does not prove anything new.”

“The thing that really matters is that, by whatever metric, we’ve spent every month for several decades on the warm side of any reasonable baseline,” Arndt added.

As for Earth’s vulnerable poles, the April average for Arctic sea ice extent was the second smallest in the 39-year record at 378,000 square miles (6.8 percent) below the 1981-2010 average, NOAA said.

On the other end, NOAA said that Antarctic sea ice extent during April was 320,000 square miles (12.3 percent) below the 1981-2010 average, the fifth smallest April extent on record. Antarctic sea ice rapidly expanded during the first half of April, but slowed later in the month. 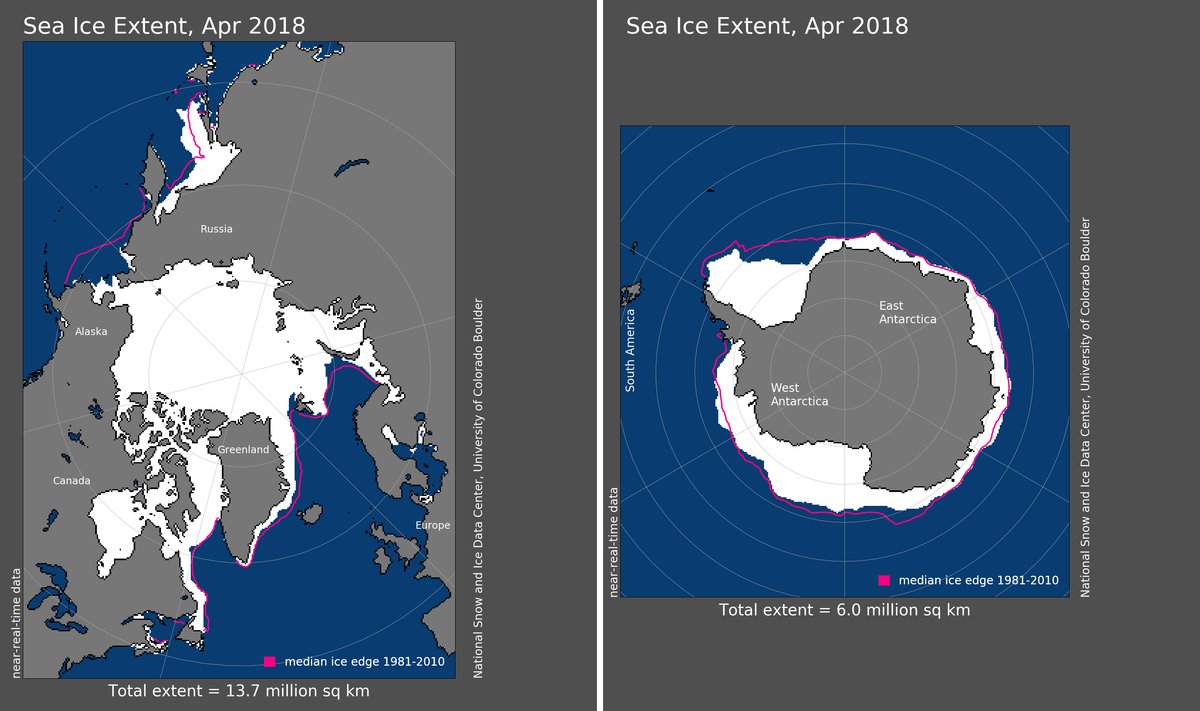