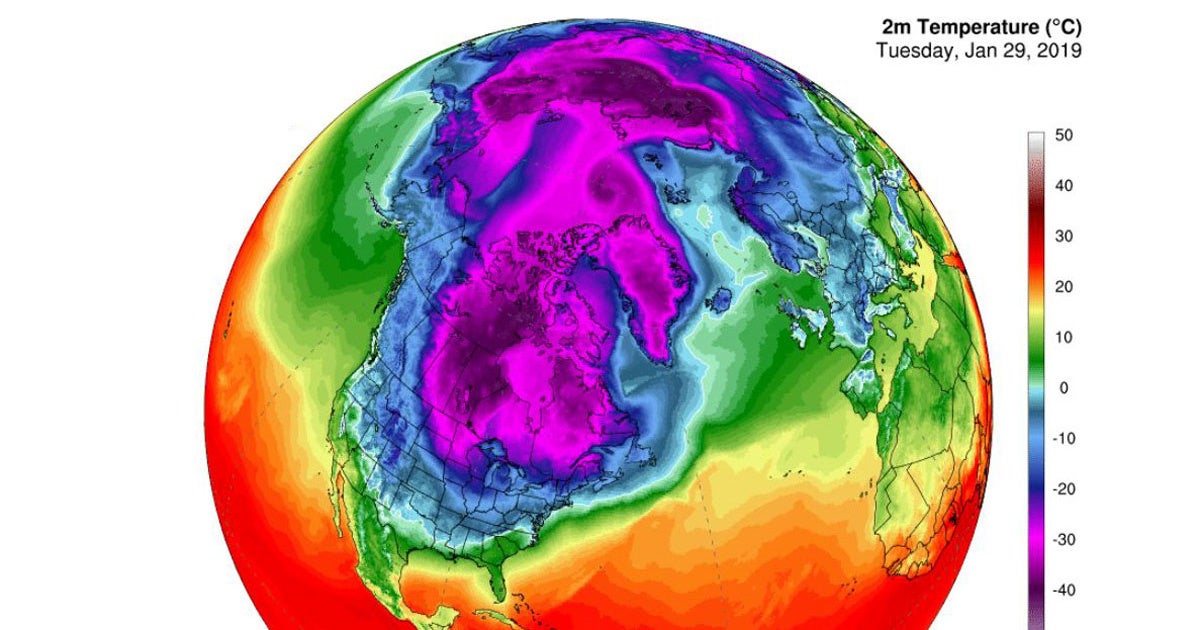 1. Many U.S. Residents Will Face One of the Coldest Air Masses in Decades

Winter storm Jayden was given a name on Jan. 26, after it met the Weather Channel’s forecast criteria of at least 2 million people residing in areas under a National Weather Service winter storm warning. The snow is forecast to move over the northern Great Plains into the Great Lakes region and then the Northeast, while icy conditions and heavy rain are likely in the South.

Temperatures are predicted to plummet following the wind and snow, as one of the coldest air masses in decades settles into these regions. At the time of writing, blizzard conditions had already shut down interstate 90 in Wyoming and the governor of Wisconsin declared a state of emergency as deep snow and dangerous wind chill keeps residents hunkered inside.

The Windy City will likely earn its nickname this week as Chicago may have a wind chill of minus-60 degrees Fahrenheit; if this forecast proves correct, conditions would surpass the record set in 1871.

Back in 1871, when Chicago’s record was set, major climate change had not yet ramped up. So how can such cold records be broken with climate change? By messing with the polar vortex.

The stratospheric polar vortex is the stream of upper atmosphere air that circles the North Pole during winter. When the polar vortex is strong, temperatures in the Eastern U.S. and Northern Eurasia are generally mild. But when it’s weak, these areas can experience chillingly cold temperatures like we see today. The loss of Arctic sea ice and general amplified warming in the Arctic region is associated with a weakening polar vortex.

The extreme cold already unfolding aligns with Judah Cohen’s Jan. 21 analysis of the polar conditions predicting “over the next two weeks yielding normal to above normal temperatures across western North America including Alaska with cold temperatures across Canada and the United States (US) east of the Rockies.”

3. The Cold Is Local to Parts of North America—the Rest of the Globe Is Quite Warm

The featured map above shows the surface temperature change from the historical average for Jan. 28, and displays the cold outbreak over North America and northern Eurasia. The cold will penetrate further south as the week progresses. But note that Alaska is quite warm as is Greenland, and that for each hemisphere and the world all temperature change is above the historical average for today. Indeed, according to the NOAA global annual temperature ranking outlook, 2018 is expected to rank as the 4th warmest on record.

Temperature extremes have also occurred in the southern hemisphere. A scorcher in Australia sent large swaths of the country above 40 degrees Celsius (104 degrees Fahrenheit), suspended tennis matches at the Australian Open, caused horses to perish near dry watering holes, and led camels to compete with livestock for water.

All of which is to say that the region east of the Rockies can be dangerously cold despite global warming. As Jason Samenow put it: “The polar vortex has fractured, and the eastern U.S. faces a punishing stretch of winter weather.” So zip up and cinch your scarves. Stay safe. And remember that despite this bitter chill, the planet is still heating up.

"You're talking about frostbite and hypothermia issues very quickly, like in a matter of minutes." In my 2nd @EcoWatch post today, the Midwest is bundling up for the #PolarVortex2019: https://t.co/cStBwfb8UJ

Brenda Ekwurzel is a senior climate scientist and the director of climate science at Union of Concerned Scientists.